BREAKING NEWS
06:54
Home News High-tech hiccups — putting up with precision ag and GPS systems when you can’t get support 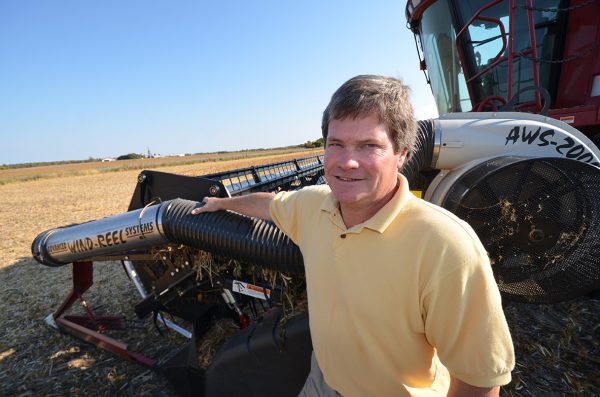 MOOSE CREEK — A few years back, Alain Leduc was ready to hit the field, but a computer glitch parked the planter.

“It took us three days to get going. This is not uncommon. I talked to three guys this year who told me the same thing,” says the Eastern Ontario crop farmer. “The technology is fantastic. When it’s working, it’s beautiful. If it buggers up, you’re left twiddling your thumbs.”

It’s not plug-and-play and many farmers have had their fair share of hiccups.

Going well beyond GPS auto-steer, managing the crop down to the acre to increase yields and maximize inputs is constantly evolving from variable rate seeding and fertilizer application to using prescription maps to automatically switch between two hybrids based on soil type.

But buy-in to all of its possibilities is slow, says Greg Millard, a Winchester-area crop farmer and dealer for Illinois-based Precision Planting Inc.

As few as 30 to 35 per cent of farmers are tapping into everything the equipment can do, Millard suggests.

Equipment sits unused. Some farmers use GPS to plant straighter rows but don’t move the receiver to the sprayer. Others have caught onto row clutches, which automatically turn rows off and on independently to avoid overlap or bare spots on oddly-shaped fields, but don’t use the planter’s variable rate seeding potential, he says.

Leduc first bought into precision agriculture 16 years ago with a GPS-equipped combine. But no one showed him how to use it. Instead, Leduc paid for a course. When there was a problem, nothing was done at his end. The dealership would call manufacturers stateside or he’d call day and night to Iowa, driving up his cell phone bill.

“It stopped working and there was always more money. Talk about frustrated. It was not as gratifying as we thought,” says Leduc.

He hasn’t given up. Over the years, he’s sunk six figures into GPS guidance systems, Precision Planting equipment to precisely space each seed at the right depth, and the ability to apply fertilizer at variable rates according to soil maps.

He’s got in-field use down pat — and thinks most farmers do. The real issue is how to extract and use the data afterwards, says Leduc, who’s passed some of that responsibility to his adult children, Pat and Erin. He wants to layer drainage, planting, fertilizer, pesticide application, and yield maps to analyze the variables affecting cost per bushel from field-to-field but the expertise is missing.

“There is a gap. A lot of people will be happy with a yield monitor because the rest is so complicated,” says Leduc.

He takes part of the blame — he’s not taking the time to get answers — but Leduc says step-by-step technical support is lacking.

Dealers sell systems and do a once-through on how they work but sometimes struggle to fix them and don’t help farmers grasp the nitty-gritty, he says.

“I think they truly thought farmers were going to figure it out themselves,” says Leduc, who’d pay extra for a service package.

But the frustration hasn’t reached OMAFRA, which provides conflict resolution to farmers with machinery complaints. It’s logged only three complaints about precision technology, all in 2013.

Support has improved over the last five or 10 years, says Quebec crop and hog farmer Billy Beaudry. There used to be one technician for multiple dealerships but now each dealership has two or three that can handle most day-to-day issues.

Beaudry, who farms with his parents, Alain and Sylvie, and his sister, Cindy near St-Valérien-de-Milton, west of Montreal, is getting a return on the farm’s roughly $200,000 investment using RTK guidance with sub-inch accuracy for strip tilling, prescription maps that guide variable rate seeding and land levelling, and GreenSeeker sensors that steer variable rate nitrogen application.

Like Leduc, data management is the holdup for Beaudry. Free dealer training sessions aren’t advanced enough, he says, suggesting it may be a job for agronomists.

The industry is growing so fast that dealerships might be playing catch up, says Chesterville crop farmer Marty Derks, who partnered with OMAFRA on a variable rate seeding trial this year.

“I call it growing pains. There could be a better way of handling support without spending 40 minutes on hold while the sun is shining and the hoppers are full,” he says, adding that the onus is also on farmers to do trial and error. “You have to have that kind of patience.”

While some farmers north of 50 put young guys to shame, the uptake is higher among the up-and-comers, says Derks. But some farmers don’t trust it and need better proof of its return on investment.

Millard agrees that some farmers aren’t comfortable transferring data from the computer to a USB to the in-cab monitor. Others don’t have the GPS-tagged yield data from previous years to get up and running. Help crunching the numbers from big manufacturers makes some farmers nervous about how their data will be used, he says.

The learning curve takes time and farmers don’t get much practice, he says. “That farmer is only using that product for 10 days and it sits on the shelf the rest of the year,” says Millard, adding that some farmers have other priorities. “For some guys, the bread and butter is those cows.”

Some dealers may have taken on too many precision products while trying to service too large an area with limited staff, Millard suggests.

With help from two other farmers, he does his own tech support, with technicians in Illinois on call when he hits a software snag he can’t solve. Millard fields 15 to 20 phone calls per day when planting begins, sometimes letting his own planter lie idle to drive up two to hours for the 10 per cent of calls without a ready fix.

“My best day with a 12-row planter this year was 60 acres and my worst was 10. That’s because we were trying to keep other guys happy. Sixty acres with a 12-row — that’s sad.”