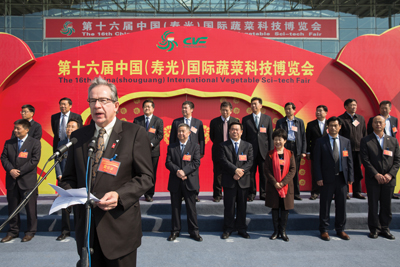 CHINA — Two farm groups say a recent trade mission to China showed there was a lot of demand for Ontario meat.

Ontario Pork chair Amy Cronin said China is interested in a high-quality product and that Ontario pork producers could help fill that void.

Currently, China produces and consumes half of all the pigs in the world. The average Chinese citizen eats 84 pounds of pork a year. Canadians average 59 pounds a year. Pork is the most popular meat in the world.

“We were there to investigate the market for education purposes, to better understand that marketplace and understand how we can help to facilitate things back in Ontario,” said Cronin. “There’s so much interest there in Ontario pork and Canadian pork. The Chinese market is huge. There are 1.3 billion people in China. Their people have more income than they’ve had in the past and as they grow their income, they want to buy a high-quality protein product and pork is a perfect choice.”

Beef Farmers of Ontario director Rob Lipsett, who was also on the trip, said the Chinese “want any kind of beef.”

The beef farmer from Annan, near Owen Sound, said “they are particularly interested in higher-end safety assurance programs. There was a lot of interest in the Ontario corn-fed program. I wasn’t aware of how big the demand for beef really was.”

Canada exported just under 7,000 tonnes of beef to China in 2014. For that number to expand, Canada’s beef herd numbers will have to increase, he said.

“Our supply limits how much we can send but they would take everything,” he said. “They can’t keep up with the demand. This gives us a re-assurance to expand the Ontario cow herd. We do have a market to go into, and we shouldn’t have to worry about flooding the market and depreciating the prices too much.”

The 20 groups on the trade mission also included Ontario Greenhouse Vegetable Growers and the University of Guelph. Eastern Ontario’s R.D. Legault was the only seed company on the 10-day trade mission last month. Manager Raphael Leclerc-Dorval said that dealing with China is like running a marathon, not a sprint. It could take three or more years of work to secure the first sale, he said.

Ontario signed two deals with China for wine and maple syrup while on the mission.

Vineland Estates Winery in the Niagara region will sell more than $1 million in winery products in China after signing an agreement with its Chinese partner.