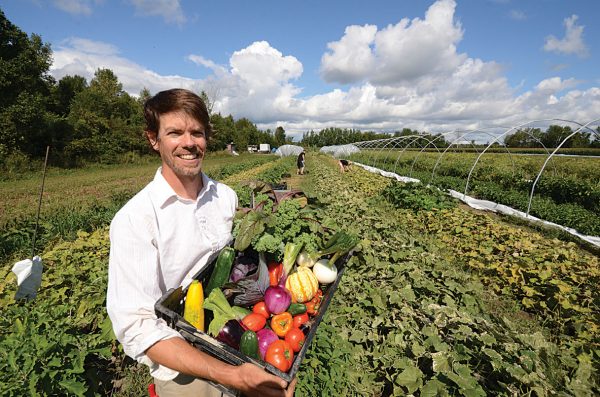 STITTSVILLE — Jason Gray is a full-time farm manager logging 60 to 70 hours per week and overseeing an army of more than 600 volunteers to plant, weed, and harvest veggies for families in need.

“I have to be here six days a week. There’s no way around it. I do the seeding, plowing, planting, weeding. You name it: everything from A to Z,” says the community harvest co-ordinator with the Ottawa Food Bank.

Launched in 2010, the original vision for the community harvest program was gleaning and soliciting donations from farmers. But with an ag sciences degree and experience co-managing farms in British Columbia, Gray wanted to do more.

He started with a half-acre of organic carrots at Roots and Shoots Farm in Manotick Station and in 2012 planted a two-acre plot at Tom Black’s Stittsville farm.

It’s up to nearly five acres this year of multiple varieties of 14 different crops, including broccoli, tomatoes, eggplant, and cantaloupe.

Four acres yielded 73,000 lb. last year, about half of the farm produce the food bank distributed last year — the totals grow every year. The other half came from donations from about 20 other farms and purchases at the farmgate and farmers’ market. Interested farmers can e-mail jason@ottawafoodbank.ca or call 613-745-7001 ext. 109.

Annual grant money has paid for a generator to run the water pump for irrigation and the washing station, tiling the land, and fuel for Black’s loaned tractor. Pakenham contractor Peter Stanton drilled the well but wouldn’t take a cent when he heard it was for the food bank. Home Depot donated a locked shed.The grant also offsets the time Black spends cultivating the land and spreading composted manure each spring.

Gray says help from Black, who is also Ontario Landowners Association president, has been invaluable.

“Tom downplays it, but he is quite generous with his time. If a tractor breaks down, Tom drops everything,” Gray says.