HELICOPTER CRASHES NOT SO UNCOMMON: Crop dusting pilot at Brantford did not see low-hanging lines

BRANTFORD — More than one year after a helicopter crashed while spraying a Brantford-area farmer’s field, the Transportation Safety Board of Canada issued its official report, concluding the pilot’s view was obscured by the early morning “glare from the sun” when it crashed into the “unexpected position” of low-hanging wires.

The Robinson R44 helicopter was destroyed. The pilot in her mid-30s was seriously injured. 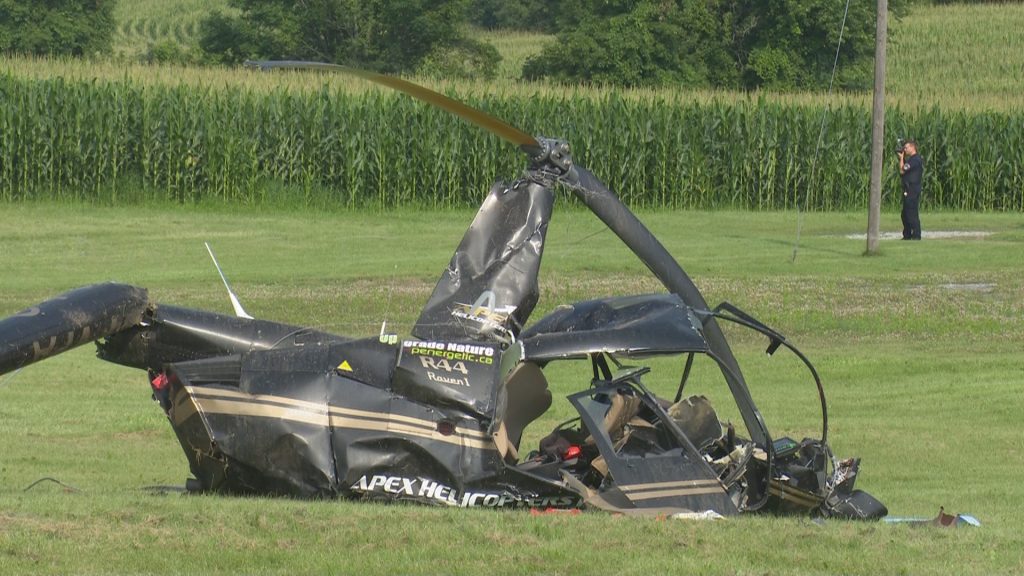 The Transportation Safety Board of Canada released its report on this 2021 crop dusting helicopter crash. (David Ritchie photo)

The helicopter, operated by an experienced crop dusting pilot with Apex Helicopters on July 25, 2021, lifted off from a field for a visual reconnaissance flight and then began spraying fewer than 10 feet above the crops when it struck the wires and crashed 270 feet away, on a nearby property. There was no post-impact fire.

The Sept. 29 report found two oddities. The struck wires were lower than other nearby wires and were oriented along the edge of the corn field rather than the more common position alongside a road. These two factors, combined with flying directly towards the sun, and the fluid spray or dirt on the windshield, contributed to the crash, the report says. “The combination of the ineffective reconnaissance, the unexpected location of the wires, the impaired forward visibility, and the reduced time available to detect and avoid the wires resulted in the pilot not seeing the wires during the first spray run,” the report concluded.

While helicopter and small plane crashes are not common, they are not unheard of. A pilot was killed in Alberta last month when his aircraft, designed for crop dusting, crashed at Camrose. There have been 18 small aircraft crashes, including at least four involving helicopters, in Canada so far this year to Oct. 1.