BREAKING NEWS
06:16
Home News He sold the farm to move to Europe only to return and buy his old farm back 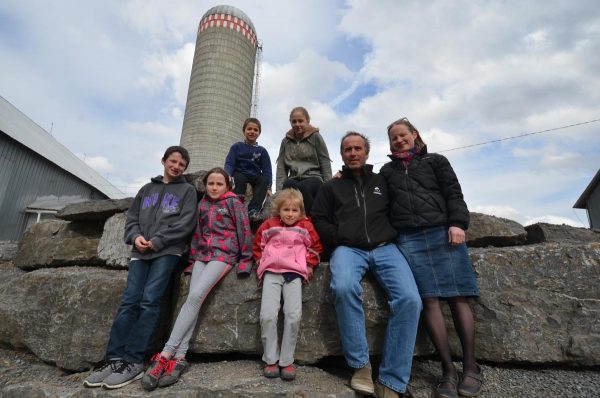 MOOSE CREEK — Last summer, Alain Jaquemet sold his Moose Creek dairy farm lock, stock, and barrel, packed his family’s bags, and made a beeline for the Swiss countryside. But in less than a year he was signing on the dotted line to buy his old farm back — to the delight of his seven children.

“The kids never forgot where their home is! When they heard we were buying our old farm back, it was the cherry on top of the sundae,” says the 46-year-old, who’s not quite as over the moon but glad to be farming again.

Immigrating to Canada from Switzerland when he was eight, Jaquemet always dreamed of going back and hoped Switzerland or France offered his children more opportunities to farm.

It only took five months of touring farms before he threw in the towel.

On the Swiss side of the border, it was a hard sell to get farmers to part with farms that had been in their family for hundreds of years.

“You could have all the money you want in Switzerland but they don’t want to sell,” says Jaquemet.

In France, it was tough to make a buck. The milk price dropped from 51 to 34 Canadian cents per litre during their stay and some farms were 20 years overdue for investment and making little headway on debt.

Jaquemet made a better living trucking cattle in Switzerland.

“The poor guys in France. The more we visited farms, the more we saw where we were going to end up. If you’re going to spend money, you have to be able to make money,” says Jaquemet, adding that not all French farms were in dire straits but they couldn’t find the right fit. “Maybe we were expecting too much. My mother told me, ‘stop looking for your own farm over there.’”

Jaquemet realized just how good he’d had it with supply management, with cash for repairs and upgrades and room to grow. “Anybody who complains about our system should go look elsewhere. We’re quite lucky.”

The contrast was stark: Where a friend in France has held steady with about the same herd size and land base for the last 20 years, over the same time Jaquemet expanded his herd from 15 to 80 milking cows, installed two Lely robots, and bought 350 acres.

Jaquemet told his realtor Marcel Smellink that he wanted back in and was visiting farms in Western Ontario by early December.

His jaw dropped when Smellink phoned to say his old farm was going back on the market. “‘Are you making fun of me?’ I said. I didn’t even dare pray for that,” says Jaquemet.

By coincidence — and maybe something more — the new owner of Jaquemet’s farm was keen to buy in Western Ontario. “It wouldn’t have happened without God’s mercy for us,” says Jaquemet.

He paid a premium to get his old farm back and also bought a 50-cow tie-stall operation about 10 kilometres down the road. Keen to give each of his children a chance to own his or her own farm, he plans to set up his 19-year-old son, Jacques-Antoine, in the tie-stall operation.

He takes possession of the home farm at the end of June and can’t wait to get back to the robots. He isn’t ruling out a new barn and robot at the new farm.

Jaquemet is a little disappointed the European experiment was a bust, but says they’ll grow from it.

“It all ends well. We are thankful. It was a vacation. That’s what I take it as: one big, expensive vacation. I’d do it again, but maybe a bit differently. Take a vacation. Don’t sell your farm.”