He pimped his planter 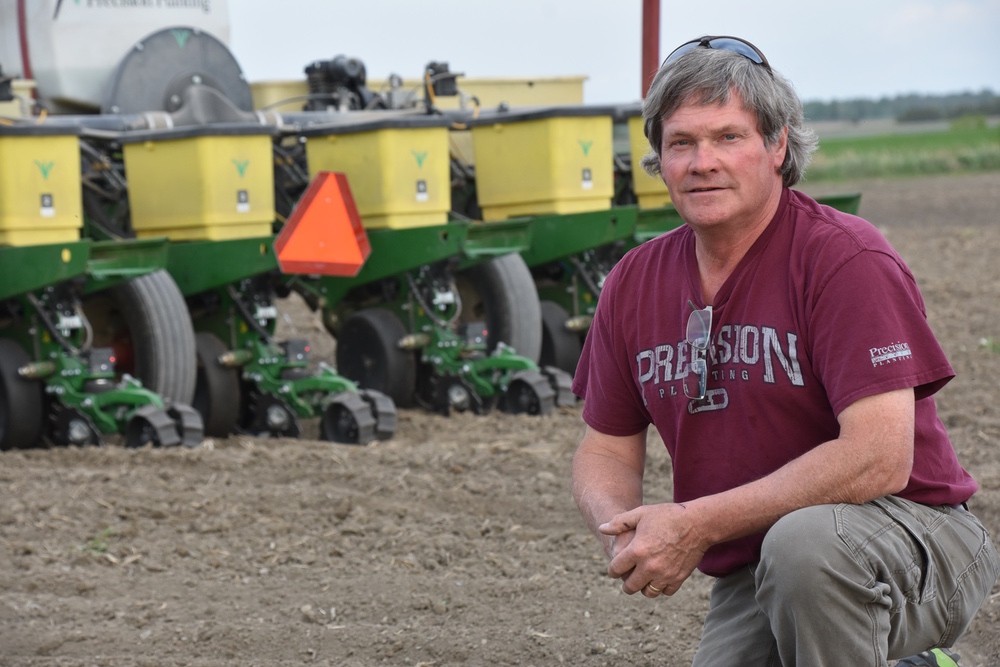 Greg Millard, of Vernon Valley Farms, is delighted with his old planter that has cutting-edge new technology. (Nelson Zandbergen photos)

VERNON — An Eastern Ontario farmer has retrofitted a 35-year-old planter to re seeds into the soil at the optimum moisture level.

Greg Millard, of Vernon Valley Farms, has been showcasing the cutting-edge “SmartDepth” technology produced by Precision Planting on a retro tted 6-row 1980s planter this spring. It’s a computer-controlled system in which each seed is injected into the soil at rapid speed and reaches its optimum moisture level in the soil. Millard believes that this technology is one-of-a-kind in North America.

The setup does double duty, demonstrating the latest breakthrough from the Illinois-based manufacturer while showing that high-tech Precision Planting upgrades can be retrofitted to old and new equipment.

With final testing of the technology completed last year, 2021 marks the commercial debut of SmartDepth, says Millard at his farm-based business, just south of urban Ottawa where he also grows 550 acres of crops. It’s like Millard is running a speed shop for muscle cars. But he juices up planters with all the add-on gadgets to boost production.

Early observations this year in southwestern Ontario — where another dealer is demonstrating the technology — suggest a noticeable improvement in uniform crop emergence as each seed benefits from the best available soil moisture at planting time. Millard reports that out of 32 corn kernels planted using SmartDepth within a measured 17 ft. 5 in. row length (equivalent to one thousandth of an acre) 27 plants emerged at the same time. But on rows where SmartDepth was intentionally not used, plant emergence was “very hodge podge” and “all over the map,” he reports. 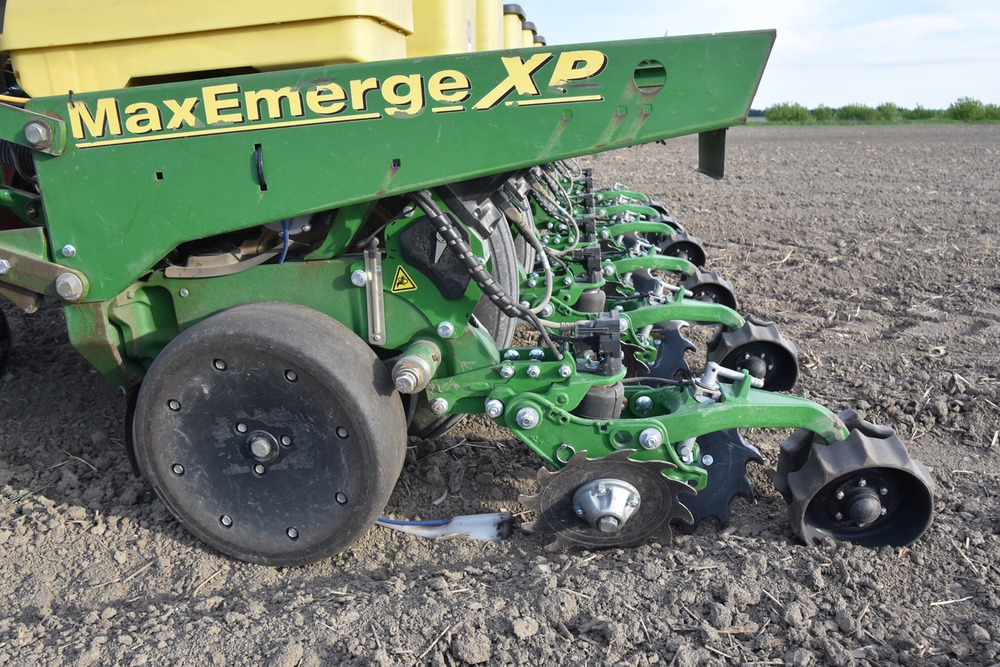 This 1980s planter is capable of finding the best soil depth for each seed to reach its optimum moisture level.

The improvement in just emergence alone should produce a stronger stand and a better yield in the end, he says.

As the planter is pulled across the field, an onboard computer monitor actively “hunts” for the optimum moisture level of 33 to 35 per cent in the soil, using readings fed from another Precision Planting component — a “SmartFirmer” — a sophisticated hockey-stick-shaped moisture sensor dragged along the seed bed. The computer reacts to the flow of moisture data by constantly adjusting small, pneumatic airbags to adjust the planting height and plop each kernel into the desired depth. A hydraulic levelling system also assists with the process, while a unique furrow-closing system ensures the earth is zipped up nicely.

Millard says the SmartFirmer element has been around for about four years. The farmer simply reads the moisture levels on the monitor and stops the tractor to make manual seed-depth adjustments on the planter from time to time. But now, the farmer doesn’t need to leave the cab.

The combination of Precision Planting technologies results in more efficient seed use. Individual hoppers are easily shut off from inside the cab, avoiding double planting of rows when driving into headlands or finishing off the edge of a field. One customer reported a 5 percent reduction in seed used, he says.

Millard estimates the cost of adding all related Precision Planting components onto an existing seeder (including SmartDepth) at $6,000 or $7,000 per planter row. But it’s a bargain compared to the sticker shock of new planters that don’t necessarily have all of the latest capabilities in any case. (He’s retrofitted about 8 or 10 brand new planters of various makes with Precision Planting tech, too.)

A 1981 John Deere planter is the oldest unit he’s retrofitted to date.

As for the new demo unit at Vernon Valley Farms, it was fashioned from a 1986 Case IH 800 Millard acquired in Quebec last fall after learning that Precision Planting would supply him with the SmartDepth components for the project.

Every dealer was eligible to rig up a planter for the 2021 rollout, and he credits his agronomist associate Paul Sullivan of Kinburn with cajoling him into taking part as soon as he could.

A neighbour helped weld up the attachment for a new liquid fertilizer tank, which accompanies existing dry fertilizer bins that remain in place on the refurbished Case. It was quite the winter project, amid the challenges of sourcing parts during a pandemic.

“Would I build another with a pandemic going on?” Millard rhetorically asks, grinning. “No.”

In the business for 22 years, the 60-year-old looks forward to seeing more technological innovations down the road. At some point in the future, he expects an industry where each planted seed is GPS’ed and placed in the ground tip down, with the germ turned to the centre of the row. Those last two measures alone would boost yields by a bushel per acre, he said.

Millard said that the perennial pressure to reduce input costs turned 2020 into a big year for precision planting and his company. With high commodity prices and optimism across the industry, he expects 2021 to be another good year.