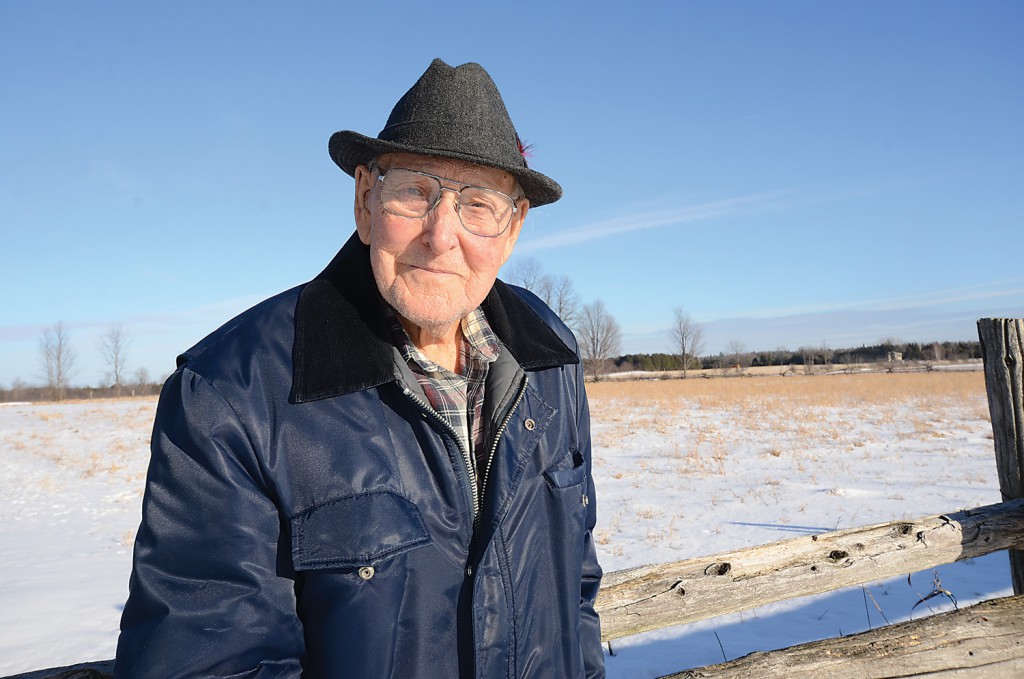 PERTH  John Sheil was itching to buy the family farm in the early 40s, but his father wouldnt have any of it.

“He wouldnt talk to me at all. I was 24, and I decided it was time to do something for myself,” says the now-96-year-old Perth farmer, possibly the oldest active farmer in Eastern Ontario. He bought 65 acres, a house, and a barn down the road in 1942 for about $1,400  less than $20 per acre. Hes farmed there for more than 70 years and hes still at it. He milked dairy cows and raised pigs and beef  he sold the last of the beef herd two years ago  and he grew 18 acres of soybeans for the first time just two years ago. He hires neighbours to plant, spray, and harvest but did his own plowing and discing, and even raked hay for his nephews last year.

Born in 1918, Sheil grew up in Lanark County when planes were so rare that when one flew overhead, his teacher let students out to watch. As the fifth oldest of 11 siblings, Sheil quit school at 14. Field work was horse-powered and Sheil even hitched up the team to haul logs to Carleton Place and Perth for four years until his father bought a truck.

A tractor was unavoidable. In 1934, the horses started dying from what the vets called swamp fever. It was June and the crop still wasnt in. His father bought a second-hand tractor, a rare sight. But he only drove it once. Sheil was 16 and about to plant buckwheat but the tractor refused to start. He turned the crank and it flew backwards, breaking his wrist. “A wire was grounded on the distributor cap and it fired on all pistons at once.”

After the Second World War broke out, Sheil took military training for a month but was sent back to the farm. “They told me to go home and produce milk and pork. England was starving.”

When Sheil bought his ramshackle farm, he had to put a roof on the barn before he began milking 16 cows. He earned $1.60 per eight-gallon can. He didnt have electricity until 1950 and he cut the hydro poles himself. Running water in the house arrived in 1960.

But the eight-gallon cans were on the way out with the introduction of supply management in the 1970s. “Id have to put in a bulk tank or quit, so I quit. You had to milk 40 cows to get that paid for,” he says. “I went and bought a Hereford.”

He also bought 12 sows, raising market pigs alongside beef cattle until the mid-80s. He bought his fathers sawmill and built cottages, houses, and barns. He was reeve of Beckwith Township for six years and on council for another 35.

Mechanization, especially the combine and the baler, made a world of difference but the power-takeoff shaft also brought new dangers, says Sheil, who has plenty of horror stories.

But not all end in tragedy. He remembers one time when a farmers clothes got caught while he was leaning over the bar at the back of a manure spreader. “He was out in the field on a cold, cold day and it took every damn stitch off him but his socks and boots. He got to the house with the tractor and his wife had a bunch of women over for some meeting.”

Sheil no longer lives on the farm but once a week drives the 15 kilometres down the road from his tidy bungalow. Hes sometimes short of breath, uses a cane, and survived a heart attack in the mid-1980s. He lives alone, cooking and cleaning for himself. His wife, Doris, died in 1989 and his second partner, Verna, in 2005. His nephews, Brad and Kevin, run the home farm a few kilometres away and his daughter, Gail, and her family live in Pakenham.

These days, Sheil enjoys a slower pace. He hints this might be his last year for crops but has already bought 32 bags of soybean seed. “Youve got to have something to do besides sitting around.