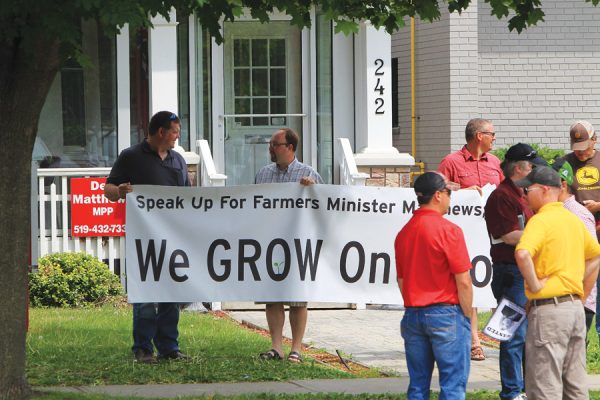 LONDON — Two protests by the Grain Farmers of Ontario at Liberal MPPs’ offices are just the beginning, said the GFO’s chair.

Almost 50 farmers showed up at MPP and deputy premier Bev Matthews’ London office May 29 and another 50 at Minister of Agriculture and Rural Affairs Jeff Leal’s Peterborough office. They came to protest the potential restrictions on neonicotinoids, the popular insecticide seed treatment used by 90 per cent of corn growers and about 60 per cent of soybean growers.

The provincial government wants neonic use reduced by 80 per cent by 2017, saying neonics are killing honeybees. The GFO argues that the province is short on science and appealing to an emotional environmental activist base.

“Farmers are getting really frustrated with this draft regulation and how quickly the government is moving forward on it,” said GFO chair Mark Brock. “We just don’t feel like our voice is getting heard.”

He noted that the seven-week window for public comments was about 10 times faster than for other comment periods for draft regulations that are much less contentious.

Brock said there is an appetite to do more protests, but said they wouldn’t organize tractor rallies like those 10 years ago that shut down traffic around Parliament Hill.

“We’re not done,” he said. “Our goal is to make this process as painful as possible for them (MPPs). We’re respectful, trying not to drag the public into it by snarling up traffic with tractors.Right now, we’re just trying to get our point across to people who have influence within government and elected MPPs that there’s unrest and concern in the countryside.”