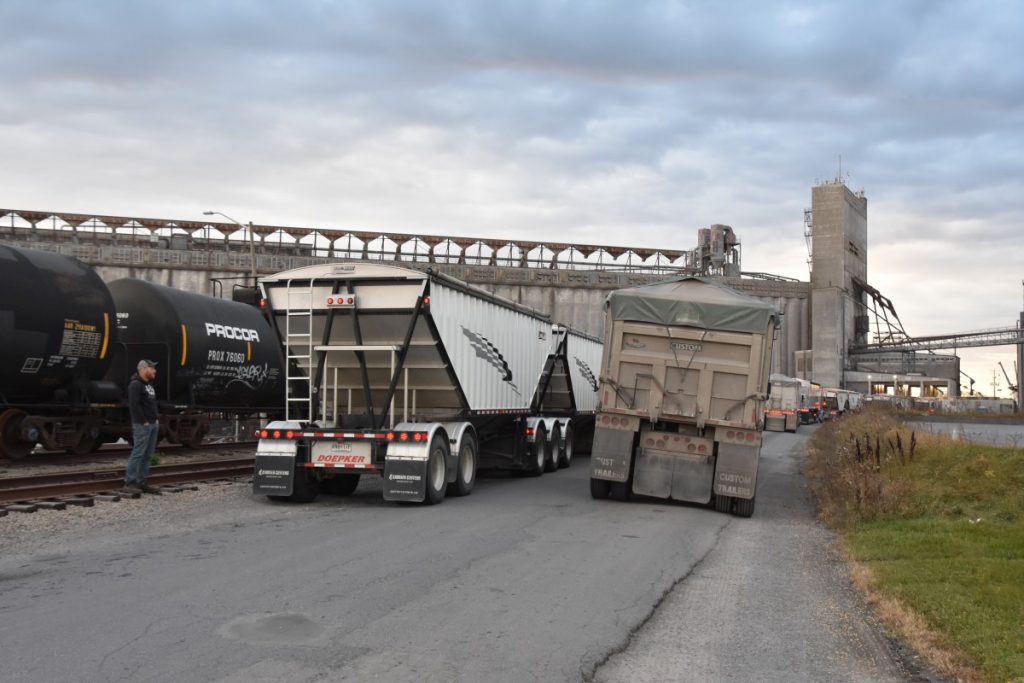 The Port of Johnstown filled up quickly thanks to an abundant wheat harvest and a soybean and corn harvest that came off the fields at record speed. (Nelson Zandbergen photo)

JOHNSTOWN — Trucks were lined up at the Port of Johnstown Nov. 10 as the facility continued to take in the region’s soybean crop in advance of the corn crop that was soon to follow.

The port offloaded the beans onto ships as usual — though the arrival of those vessels may not have seemed fast enough to some producers during this year’s exceptionally quick harvest.

Throughput speed at the Port this fall was also affected by a record wheat crop, which consumed extra tonnes of available storage, according to port general manager Robert Dalley.

Wheat usually takes up 30,000 to 40,000 tonnes at the Port, but surged to 62,000 tonnes this year. The net difference is equivalent to about one shipload. Dalley noted that there are logistical challenges to getting the grain out every year, and that truck lineups were not any longer than usual in 2022 thanks to a longstanding appointment system that ensures no more than 30 trucks on the premises at any given time.

About 100 trucks per day are offloaded. Arrivals were cancelled one day the previous week, he conceded, as the port awaited one of the dozen ships that pick up there during the harvest season. The facility has 15-days worth of space, with outgoing shipments entirely arranged around the availability of seaway vessels.