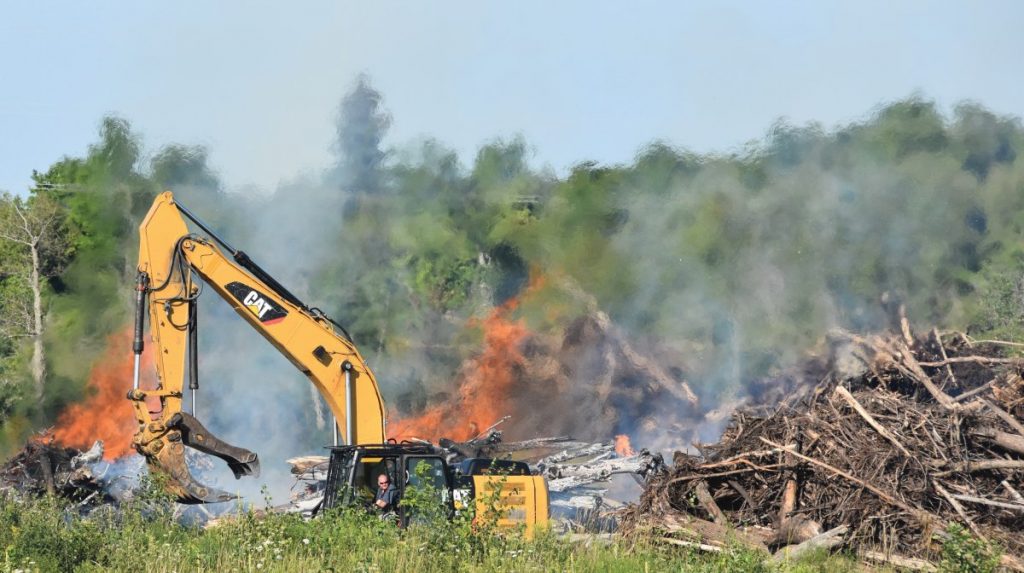 Many farmers are reclaiming farmland that has fallen into disuse and say it’s worth the time and cost.

EASTERN ONTARIO — God doesn’t make land anymore but farmers do. They are increasing cropland in the five Eastern-most counties of Ontario, led by Prescott-Russell. Those two counties increased cropland by 10.3% between 2011 and 2021.

While urban development has eaten up some agricultural land in Eastern Ontario, the region has as much cropland in production — about 2.2 million acres — as it did 10 years ago, according to the latest figures from Statistics Canada. That’s thanks to the individual decisions of countless farmers who have naturally reacted to market forces to open up replacement acres by clear-cutting.

Cash-cropper Bill Byker of Glen Stewart is a case in point.

Between 2000 and 2010, Byker brought 100 acres back into production from long-idled fields that had grown up into bushland at his home farm north of Iroquois. He followed that up in 2012 with his purchase and four-year rehabilitation of a 235-acre parcel just outside Morrisburg. Both projects involved clear-cutting what was previously logged and farmed land. The work included the removal of old fence lines and the installation of tile drainage.

“I call it reclaiming farmland,” says Byker, who estimates his investment paid off in four to five years at the home farm and about seven years at the other property.

Today, with high commodity prices and high prices for existing, productive farmland, “it makes sense to have a look at land that’s maybe marginal and how do we reclaim that, and put that back into agriculture?” he remarks.

The Christian Farmers Federation of Ontario member also feels a “responsibility to optimize the land we are stewards of,” especially at a time when the world requires more food production.

Byker says his contractor harvested the Morrisburg wood and chipped much of it for particle board. Some of the timber was also shipped whole to the U.S. This clearing method took twice as long as the traditional burn-pile method, but because of the proximity to the village, “we didn’t want to be burning for two years,” he says.

It also meant a lot to Byker to see the wood put to use rather than wasted, he says. After all, why was the land ever allowed to grow up into trees in the first place?

Byker explains such parcels of otherwise good or decent farmland fell into disuse because of drainage issues that became evident when farmers switched from horses to heavier tractors.

“The economics didn’t warrant using it for ag land,” he says. “Now, the economy around farming has improved, and drainage systems have improved.”

He adds: “They’ve learned with recently reclaimed land to go closer together with the tile drainage runs.”

Even with that benefit, the Morrisburg plot took seven years to come up to expected yield levels as soil nutrients were gradually balanced for soybean and corn production.

Reclaiming farmland also goes hand in hand with making bigger fields and the unsung environmental benefit of lower emissions, according to Byker. Fewer fence lines mean fewer equipment turns and “a lot less” fuel consumed, he explains. Where his two recent projects were originally cut up into dozens of old fields of 5 or 6 acres each, now they are just two measuring hundreds of acres each.

In South Mountain, dairy farmer Yann Bossel says he’s been clearing 80 acres of bush — previously farmland — over the last year. He expects to have 20 acres ready for planting with rye this fall. The balance will go into production in 2023.

It’s cheaper for a farmer to spend about $4,000 per acre clearing heavy bush he already owns — plus another $1,200 to $2,000 for tile drainage — rather than buy productive farmland up the road for at least $15,000 per acre, Bossel explains. “The economics are easy.”

In addition to being cheaper than buying someone else’s existing farmland, he can write off the clearing cost as a business improvement cost.

A farm must grow, like every business, the father of four young children adds. “If you’re not growing by the rate of inflation, you’re actually dying by attrition. Given that we have a young family coming up, we have more bills and we have to look at ways to become more efficient and spread our costs over larger acres.”

Like Byker, Bossel says his land-clearing contractor harvested the wood, which was shipped to Thurso, Quebec, and processed into chips. The final product is marketed as a green energy source, he says.

Both Bossel and Byker are Dundas County residents, one of the areas of Eastern Ontario that increased its cropped acres by 9.3% between 2011 and 2021. Forest cover in Dundas is still substantially higher than it was in the 1940s, Bossel notes.