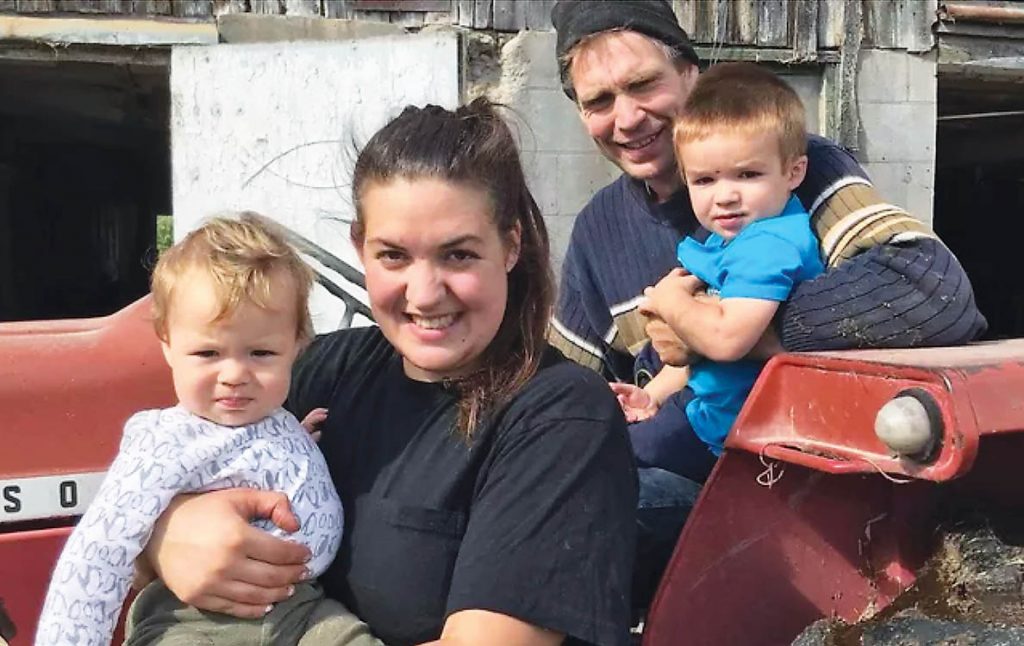 Dairy farmer Maurice Suurdt and wife Tiana are rushing to rebuild their barn by the end of February, or risk losing their production quota.

Get’r built or lose the quota

Barn burned three years ago, race on to complete reconstruction by end of February

FRANKFORD — Quinte West dairy farmer Maurice Suurdt has been working feverishly to wrap up reconstruction and restart milk production after a devastating fire three summers ago. He has until the end of February to start milking again or lose his licence to milk.

He risks losing his 43 kg. of production quota for failing to restart operations within the required period demanded by Dairy Farmers of Ontario.

After a fire or other calamity, a farm’s milk quota may be temporarily filled by other farms. DFO requires a farm to recover and resume shipping milk no later than two years plus one 90-day extension after a fire.

Last summer, the DFO board denied Maurice Suurdt and wife Tiana’s request for a longer extension beyond 90 days. However, the organization had a change of heart and on appeal granted the couple until the end of February 2023 to finish reconstruction.

Their project includes a new freestall pack barn with parlour and bunker silos to replace the 1905-era tie-stall barn that burned down on Aug. 27, 2020. The farm also lost 60 of their 80 cattle, two silos and three tractors.

Suurdt said he made a mistake by not personally appearing at the DFO board meeting when the original extension request was discussed. “We probably should have taken the day off, told the carpenters to stay home and gone to Toronto to present our case in person,” the third generation dairy farmer told Farmers Forum.

He explained that the board got the wrong impression, believing he wasn’t taking the rebuild seriously, hadn’t hired anyone to help with construction, “and that we were doing it all on our own.”

He credited his local DFO rep, Adam Petherick, for visiting the farm and attesting to the progress.

Though he is acting as his own contractor, Suurdt emphasizes that it’s “an incredible challenge” to find workers. He has a hired hand working on the project and hires carpenters by the day when they are available.

There have been lucky breaks. Thanks to a mutual friend, a crew of six Mennonite carpenters parked their horses and caught a ride from Essex County to help on the project free of charge for a day.

Suurdt, a father of five, explained that he’s trying to avoid taking on too much debt and conceded that his original barn was underinsured with a replacement value of under $500,000. The project now underway is worth an estimated $1.4 million to $1.6 million. Much of the concrete was poured on December 15. Freezing weather conditions added to the costs and challenges.

For one evening alone, the heating charges for the concrete was close to an extra $5,000, he said, acknowledging that during a recent cold snap he “wasn’t sure” of making the February deadline “if this weather keeps up.”

He explained that the project start was delayed from the outset. It was 9 or 10 months after the fire that they settled on a barn design after visiting different operations and first completing a new shed to house their heifers. “There’s just so much that happens after a fire that you never think of,” he said.

Suurdt said the experience left him unable to sleep well “for months,” and sometimes he still wakes up in the middle of the night. He feels the weight of preserving a farm operation that’s been in the family since his Dutch immigrant grandfather acquired it in 1963. It was “very stressful and traumatic” to see it ravaged by fire.

In the meantime, he’s working long hours, often into the night, to complete the new barn.