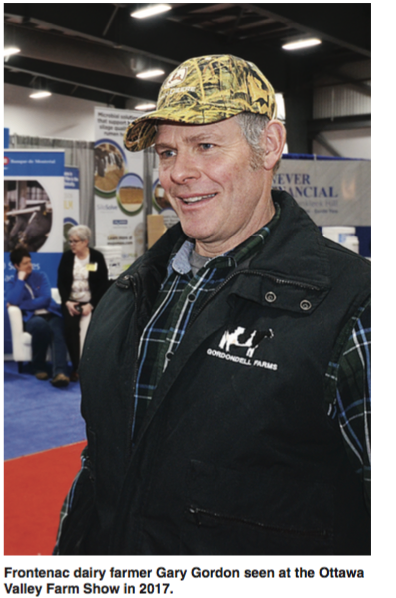 He has been the champion forage exhibitor in his native Frontenac County for 25 straight years and 24 years as the champion seed exhibitor. But he is also a perennial winner when he takes his winning entries to the Ottawa Valley Seed Growers competitions at the Ottawa farm show.

He has won 47 grand champion Ottawa titles, including 29 in forages. “My theory is when I go to the county and win, I win for myself, but when I go up to Ottawa to compete, I win for the county,” Gordon happily reports after posting wins last month in the Ottawa Valley Seed Show for grand champion hay, second-cut square bale forage, and quality hay classes. He’s the repeat winner in all three classes.

The most recent Ottawa competition was held for the second year without a farm show and Gordon laughs that he has yet to receive the three plaques he captured in 2020 under similar pandemic circumstances.

His potato entry was also judged best overall this year, but it’s this dairy farmer’s acumen with humble hay that has earned him the most recognition. When the Gordon fam- ily hosted 300 producers at Gordon- dell Farms during a recent national Holstein convention, “people were coming up to me and saying, ‘That’s the guy they call the Hay King,’” he recalls with a chuckle.

Being good at growing hay not only yields sales inquiries — though he doesn’t sell much hay — it also means getting the most out of an 85-head milking operation. “The higher the feed value, the cheaper you can produce your milk. It all goes hand in hand,” he observes. After a quarter century of competitive experience, he knows well the combination of colour, smell and maturity most satisfactory to both bovine and human judge alike.

This year’s recognition for Gordon also corresponded with a fertility milestone of a different sort. He says his very first win at the county level corresponded with the year his son, Ben, was born. Ben is now 25 years old and an integral part of the operation at Gordondell Farms.