FRINGE? Truckers gain support from across the country as organizers say they’re not leaving Ottawa 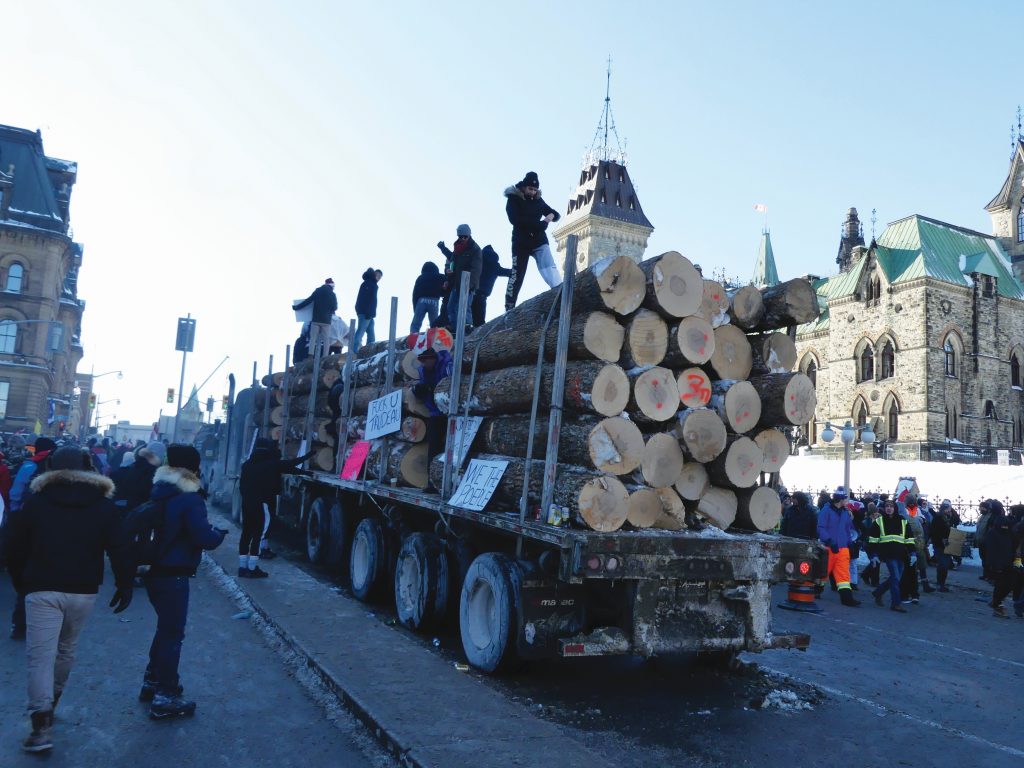 Supporters climb on top of a logging truck in front of the prime minister’s office to shout their support for truckers. (Nelson Zandbergen photo)

OTTAWA — A massive convoy of trucks that started out in British Columbia and gathered thousands of supporters along the route landed at Ottawa’s Parliament Hill on Friday, Jan. 28, while raising more than $10 million in support in one week.

The next day, more than 30,000 people showed up throughout the day for the Freedom Convoy that became a symbol of hope for millions of Canada’s fatigued by two years of lockdowns, lost jobs, increased anxiety and anger over government overreach. It was nearly impossible to count all of the trucks. There were several hundred trucks on Wellington Street in front of Parliament Hill but police barricades cut the convoy into pieces. There were hundreds of trucks on streets leading to Parliament Hill but they were diverted five blocks before Wellington Street. To get an idea of just how big this event was, at 10 p.m. on Saturday night there were 262 trucks — from pick ups to big rig cabs — in the parking lot next to the Hampton Inn, outside the city core and it was still filling up with trucks. Property owners across the region opened their parking lots for truckers. Grain haulers and farmers were among them.

By literally reading the signs, many supporters were upset by Prime Minster Justin Trudeau’s comment earlier in the week that the convoy was a “fringe minority with unacceptable views.”

The atmosphere was festive. The trucks’ horns were often deafening and continued without stop all day long for three solid days. Canadian flags were everywhere, waving over heads and draped on shoulders, as were anti-Trudeau flags. Supporters handed out hotdogs, burgers, chocolate bars, bananas and bottled water. There were whistles and horns. Families brought their children. An eight-year-old handed an envelope that read “gas money” to a visibly touched trucker. She had given him $7 in change.

Blaring horns, bonfires, and dancing carried on into the evening. The mainstream media downplayed the convoy and was quick to focus on any one person who misbehaved. Someone draped the Terry Fox statue in a Canadian flag and another person stood on the steps of the tomb of the unknown soldier. The criticism was wild. But that’s two people out of 30,000, reinforcing what CBC radio reported Ottawa police chief Peter Sloly said about the demonstrators: They were “remarkably peaceful.”

Convoy organizers held a press conference, in which they barred the Toronto Star and CBC, for distorting the facts about their mission, which began in opposition to a federal mandate that all truckers need to be vaccinated to cross the border into the U.S. Organizer Benjamin Dichter said that truckers are willing stay as long as it takes to force the government’s hand and he was prepared to still be there in the summer. Meantime, a number of Canadian hockey players, billionaire Elon Musk and former U.S. president Donald Trump tweeted their support for the Canadian truckers.