FORCE VS. FREEDOM: Truckers and farmers leave Ottawa as police use sticks and tear gas 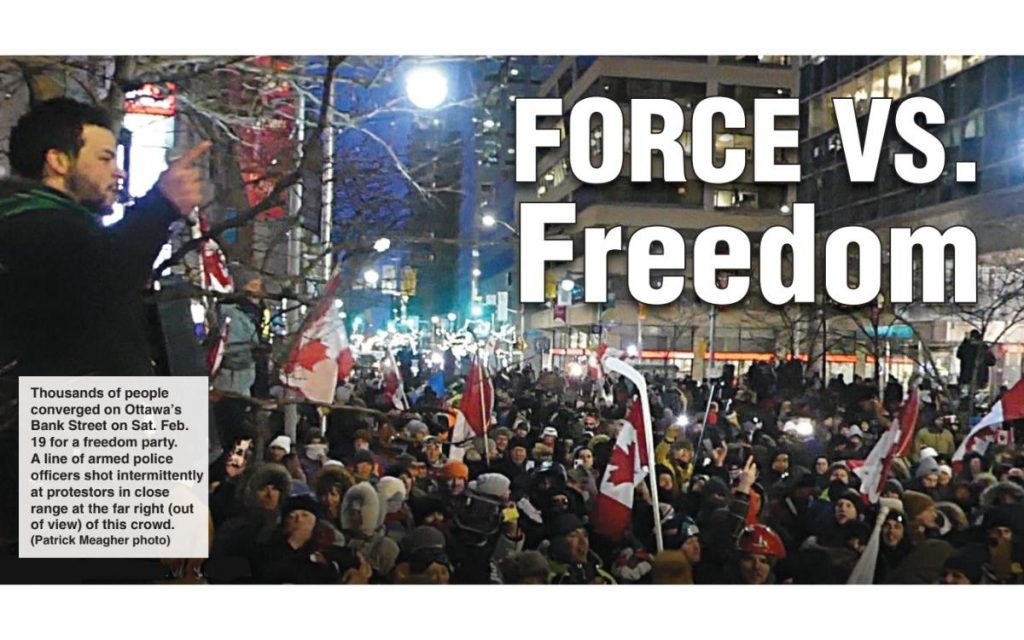 OTTAWA — Splendron Trucking owner Brent Barton got behind the wheel of his grain-hauling rig and pulled away from its long-time spot on Kent Street, amid the dwindling remnants of the 2022 Freedom Convoy.

“I was the last truck to leave,” he said, recounting his Saturday afternoon, Feb. 19, departure from the site. While Splendron employees manned the vehicle during its three-week stay in the city, it fell to Barton to personally retrieve it. When police wouldn’t let him into the police cordoned-off zone to access the truck, some “young protesters” assisted his walk behind the lines, via back streets, to get there.

Before hitting the road, “a religious group came and prayed with me and touched the truck as a symbol of freedom,” the Vankleek Hill resident said. He also had to clear his windshield “filled with cards and gifts and notes” from grateful Canadians.

“I don’t think I’ve ever cried over anything political in my life before,” he said, his voice breaking with emotion over the telephone. Owner of seven trucks, Barton said he expects the government will use its new emergency powers invoked by the Trudeau government to eventually come after his company and possibly the 5th-generation farm where he grew up and where his parents, in their 70s, still reside.

But he hopes the authorities “reach down into their hearts and don’t do that.” Barton, who volunteered that he is triple vaccinated, added that Canadians know “there’s no national emergency.” The convoy was otherwise “like a Canada Day that never ended,” with not a bad word said about it by those who made a point of checking out the scene for themselves, he said.

That was before the state flexed its muscles to put an end to the ad hoc festivities, employing lines of slow-moving police officers armed with sticks, pepper spray and semi-automatic weapons to clear out people by force. Wellington Street group leader David Paisley said he was arrested at gunpoint and later released without charges. Trucks and other vehicles were towed away if their owners didn’t drive them out.

Barton said his decision to move out came after the Ministry of Transportation threatened to revoke his Commercial Vehicle Operators’ Registration. His business would be “bullied” into closing with its equipment seized if he didn’t comply, he added. The ministry later clarified for Farmers Forum that 12 Ontario commercial trucking operations had their CVORs suspended for 7 days.

In video below, truckers retrieve their machines from impoundment in Ottawa at the conclusion of their CVOR suspensions.

Prince Edward County crop farmer Lloyd Crowe also decided it was time to go home that same Saturday morning. When Crowe learned that police were prepared to use force, he said he was not going to sustain a physical attack on his body or his uncle’s transport truck parked two blocks from Parliament Hill. “When things were heating up,” Crowe recalled of his departure. “We saw things getting out of hand with the Quebec riot squad.”

In the days before the police crackdown, processions of farm tractors showed up to bolster the truckers’ message on weekends. “Farmers have truckers’ backs,” read a sign attached to one tractor.

At the wheel of farm tractors, pickup trucks and even their own big rigs, a substantial cadre of the region’s agricultural community showed solidarity with the truckers.

As the rally entered its second weekend of protest against government-imposed COVID-19 mandates, crop farmer Martin Roth of Pontiac County rolled into the city with a pair of massive Massey Ferguson tractors. Roth vowed to stay until the end of the protest. He suggested it would take another two or three weeks before the government collapsed in the face of the opposition. “The whole system is going to collapse, not only here, but in Europe. It’s all over the globe.”

Dairy farmer Patrick Senn and his brother drove a pair of Case IH tractors into Ottawa as part of an Eastern Ontario tractorcade early on the morning of Feb. 5, during the rally’s second weekend in Ottawa. Located a few blocks south of Parliament Hill, Senn’s machine was festooned with a “farmers stand with truckers” sign at rear and a “farmers grow it, truckers move it” sticker in the side window.

In video below, farmer Patrick Senn speaks with Farmers Forum from his tractor cab in downtown Ottawa.

The 22-year-old St. Bernardine resident said they were inundated with thank you letters as well as “socks, cookies and chicken noodle soup” brought to the tractors by passersby. A woman came up to the cab door and offered blankets as Farmers Forum spoke with Senn.

Small-town bowling alley proprietor Dane Sonstenes of Elgin, Ontario, and a couple of farmer friends were busily unloading a pickup truck load of firewood at one of the rally’s barbecue sites a couple of blocks from Parliament Hill.
“We’ve brought up wood and water and some ground beef and some maple syrup,” Sonstenes, a Canadian Forces veteran who served in Uganda, Cambodia and Bosnia, said shortly after arriving in Ottawa with the cargo. “This is an amazing event. My kids have come, too,” he said. “Everybody loves it. This is the right thing to do.”

Asked about Ottawa Mayor Jim Watson’s declaration of a state of emergency — the first in a series of such declarations — trucker Doug Wag called it “a complete crock.”

“I’ve never seen any evil bouncy castles anywhere yet. It made a great day for the kids that were around. Everything here is good. Everybody’s happy,” the Mount Forest resident happily assured through the driver’s window of a transport truck as a husky dog peeked out beside him. Wag said the truckers anticipated being pressured by the authorities. “That doesn’t mean we’re going to get angry and fight back.”
“The police are just doing what they’re told to do. We don’t hold that against them.”

Lanark County cash-cropper John Vanderspank — veteran organizer of farmer tractorcades that pressured the government amid poor commodity prices 15 years ago — marvelled at the convoy and the positive attitude of those involved. “I’ve never seen so many smiles in my life…. And it’s just beautiful not to see all these ugly masks on people, and to see people happy.” Vanderspank observed that the event was drawing crowds of all ages, including children. “Everybody’s here, farmers, truckers, we’ve all come together. I’ve never seen anything like it.”