PRINCE EDWARD COUNTY — Derk Prinzen exudes gratitude in the aftermath of a gruesome farm accident he concedes could have been so much worse. A rotating metal chain on an idling combine ripped the skin off the 60-year-old dairy farmer’s left leg, putting him in hospital for more than a month — though he was optimistic of a full recovery when he spoke with Farmers Forum late last month.

“I would say my main message is I’m just so thankful things turned out as well as they have,” Prinzen said from the Kingston General Hospital where he was taken by air ambulance after the Nov. 19 calamity in his Prince Edward County farmyard. “First of all, I’m thankful to God for healing. I did see the leg when I was stuck in the combine, and I can’t believe it’s the same leg that I have now. The surgeon has done a wonderful job.”

His predicament began with a momentary lapse in judgment. He strayed too closely to a relatively small drive chain — “maybe a size 50, but that’s all it took ” — running behind the corn head. “I was picturing a good day of taking some corn off . It was a beautiful sunny day and my day changed in a hurry,” he said, recounting the moments as he performed that final walk-a-round of the combine that afternoon. 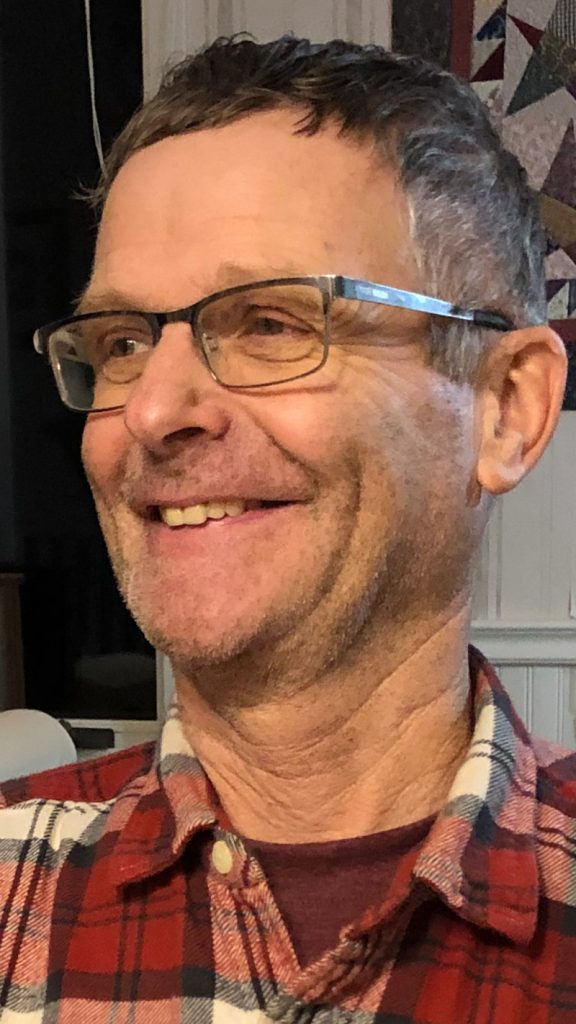 Though Derk Prinzen’s farming accident put him in hospital for more than a month, he is optimistic of a full recovery.

“It was a mistake. My coat got caught … and it kind of winched me in.”

The chain also grabbed his coveralls and ripped into the flesh of his left leg. The force reefed his body around, smacking his head against the metal. “It’s just a really helpless feeling,” he said, when asked what he was thinking at that moment. “I actually have trouble with it, still.”

He estimates the Gleaner M3 combine ravaged him in all of 5 seconds. The skin on his left thigh down to the kneecap was stripped away — or “degloved” in medical parlance. At that point, his nephew Ethan — partner in the farm operation — heard his cries for help, ran over and shut the engine down.

The younger man cut his severely injured uncle loose from the machine. “That was really difficult for him,” recalled Prinzen, who estimates being trapped for a further 10 minutes before he was freed.

“From what I could see, my overalls and the flesh…. I don’t understand how my leg can look the way it does now,” he said, again marvelling at the result of three surgeries. The third and final procedure involved a skin graft from his right leg. The surgeon also moved a muscle slightly to cover up the injured leg’s exposed — but unbroken — bone, he said.

“I’ve just gotten the best care, right from the beginning with the first responders, and the people in the hospital, everybody’s been so good,” he said.

His right leg actually hurt more than the left when he spoke with Farmers Forum. He compared the sensation of the harvested skin graft site to a “really, really bad sunburn.”

He also recovered from “quite a goose egg” left on his head.

In good spirits, he reported being back on his feet and getting around with a walker. He was home in time for Christmas, and suggested it would be a while longer before he returned to work at the 45-head milking herd — despite visions of charging back into the barn. “I’ve been lying here for over a month. My muscles are gone, and that’s going to take a while to build back up … I think, realistically, I’ve got to give myself time.”

COVID lockdown restrictions meant his wife, Erin, could only visit three days during his extended stay in hospital, he said. “That’s been very difficult. I’ve been very thankful for the phone.”

Their son Timothy works in construction and has returned to help Ethan on the farm after the injury. A broader community has also swung into action to help the family.

“The neighbours have been excellent,” a thankful Prinzen noted. “One neighbour did combining. Another couple did manure spreading. Someone else did tillage. It’s just amazing.”

Wellwishers have reached out to express their support as well. “We’ve never gotten so many cards,” he said. “I’ve gotten cards and notes from people I don’t even know.”