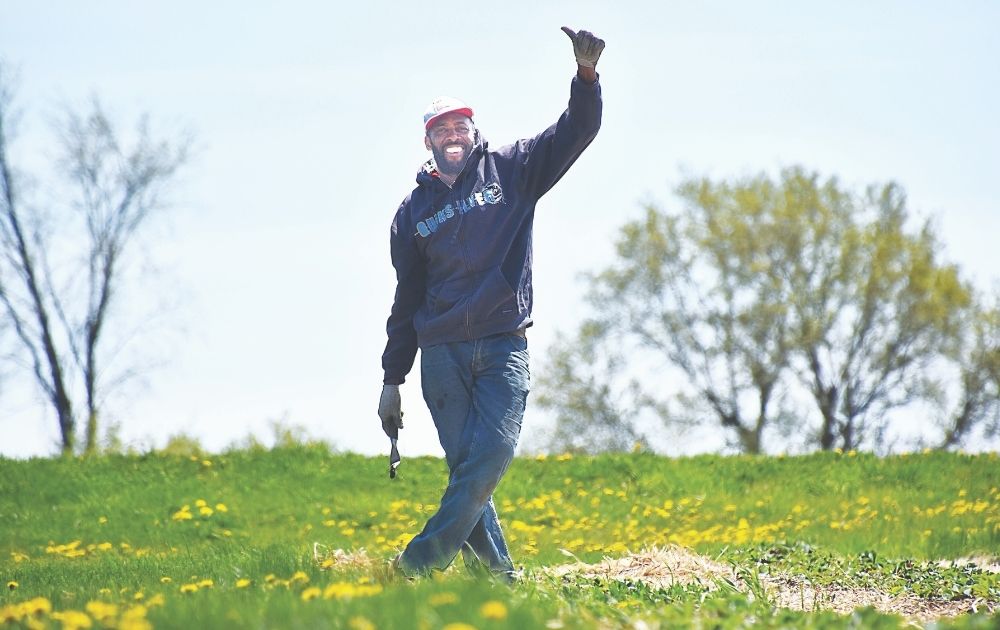 Jamaican brick mason Junior Martin comes to Canada every year for field work and says he is happy to come back year after year. (Connor Lynch photo)

The Covid-19 vaccination program hasn’t done much so far to help migrant farm workers get into Ontario this spring.

There were high hopes early in April when the provincial government announced a pilot program to vaccinate workers as soon as they got off the plane in Toronto.

Ken Forth, president of the Foreign Agricultural Resource Management Services (FARMS) said the airport vaccinations are a “good idea,” but some workers are hesitant to get the vaccine.

Forth said some workers often face days of travel, the long process of clearing immigration and getting the Covid-19 test before they are offered the vaccinations. He said Mexican workers tend to be more receptive, but Caribbean workers may be more distrustful of governments and need more time to think about it.

“After three days of travel, maybe they are not so happy to make a deci- sion on the vaccine… We are finding there is more acceptance once they talk to the guy they work for,” Forth said.

Forth said that as of late-April, 10,000 foreign workers had already arrived in the province, many before the airport vaccination program even began, and some have received vaccines from a local health unit. Since the workers are still facing a two-week isolation period after they arrive, he said many farmers have decided to bring them in early.

Prior to the COVID-19 outbreak, Forth said, about 24,000 foreign workers typically came to Ontario, but last year that number was cut to about 20,000 because of the delays and entry restrictions.

He said that number may be cut back even further this year because some workers have decided not to come back. “There are a lot of reasons. Some of them are apprehensive about traveling.” Many farmers, especially asparagus growers, faced labour shortages last spring because of delays caused by COVID-19 restrictions.

Forth said the situation this year is mixed. “Some farmers will have everybody, some of them will be short.”

Mike Chromczak, an asparagus grower near Tillsonburg, said he has brought in most of his migrant workers, but has run into delays because of outbreaks of COVID in Jamaica and problems getting documents from embassies.

“Somehow it is even more stressful this year than last year,” he said.

His workers arrived before the airport shots became available and he is working at persuading them to get vaccinated. “I got my rst shot and more of my guys are be- coming open to it, I am hoping with time they see the benefits of getting vaccinated,” Chromczak said.

Ontario Ginseng Growers Association chair Remi Van De Slyke said the labour situation has become urgent in his sector because some larger growers had their shade covers pulled down and damaged by a mid-April snowstorm. He does not see any improvement in bringing migrant labour into the country this season. “I think it’s worse,” he said. “We thought that having one year of this under our belt it would be better. But they (governments) just tightened everything up that much more.”