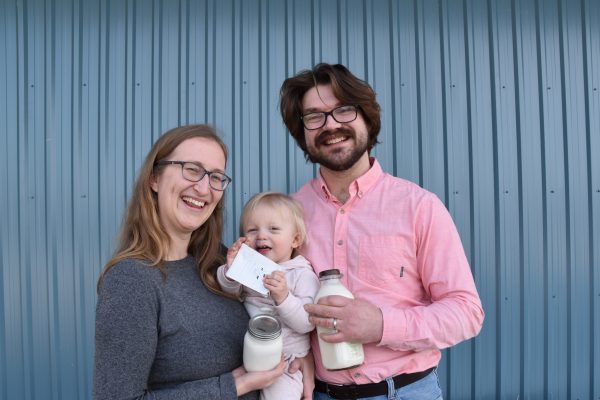 Marja DeBoer-Marshall and Laurence Marshall and their on-year-old daughter Mavis, at Golspie Dairy.

WOODSTOCK — Bring your own bottle to Ontario’s latest on-farm processor where a featured vending machine will allow customers to conveniently fill up with cold, beautiful milk — all by themselves. Offering whole, non-homogenized white and chocolate milk, the public tap and attached retail store will debut in July.

No worries if you don’t have a container: The Woodstock-area operation at Golspie Dairy will sell empty bottles in a separate vending unit alongside wedges of British-style cheese that will be the speciality of the new processing plant at the 32-cow Holstein farm.

The $30,000 to $40,000 Swiss-made fluid-milk vending machine merely represents the end of the milk line. The farm’s $1-million-plus new processing facility is what really makes the operation possible in the first place, co-owner Marja DeBoer-Marshall points out.

She and husband Laurence Marshall decided in earnest to pursue on-farm processing about 18 months ago, she said. His parents, Ron and Wendy Marshall, are also partners in the farm. Ground was broken on the family’s new processing plant last fall.

“Each of us has been probably putting in between two and 20 hours every week on this project to get it up and running,” DeBoer-Marshall said.

By opting to sell fluid milk via vending machine, they’ve managed to avoid the cost of establishing a conventional bottling line, she pointed out, as well as the additional labour of handling bottling milk. “The customers do that themselves.”

The Brunimat unit is often used in Europe to sell raw milk at the farm gate — though that’s not allowed in Ontario. It’s believed the Golspie machine will be the second Ontario farm selling pasteurized milk from a vending machine. 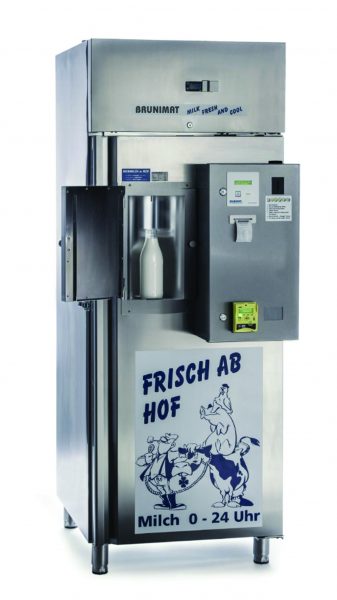 An on-farm milk vending machine made by Brunimat.

DeBoer-Marshall recommends mason jars as a preferred container, but even a washed out pop bottle would work.

Users can also start and stop the unit to enjoy, for example, a litre of chocolate milk distributed over four cups or a couple of thermoses during a family outing. Payment can be made by coin or credit card, with the cost expected to be in the $2 to $2.25 range, she said.

They’re also looking at bulk sales in larger quantities for customers interested in making their own yogurt or ice cream.
The machines will operate on expanded hours — 10 a.m. to 8 p.m. seven days a week.

According to the Dairy Farmers of Ontario, there are now 17 farms processing their own milk in the province. Another 7 have submitted licensing applications.

DFO will pick up and use the balance of milk produced by the Golspie herd that isn’t processed at the farm. The amount of milk processed on-farm will naturally depend on the family’s farm-gate sales. DeBoer-Marshall said she aims to be processing 50 to 60 per cent of the farm’s milk output within the first year of operation.