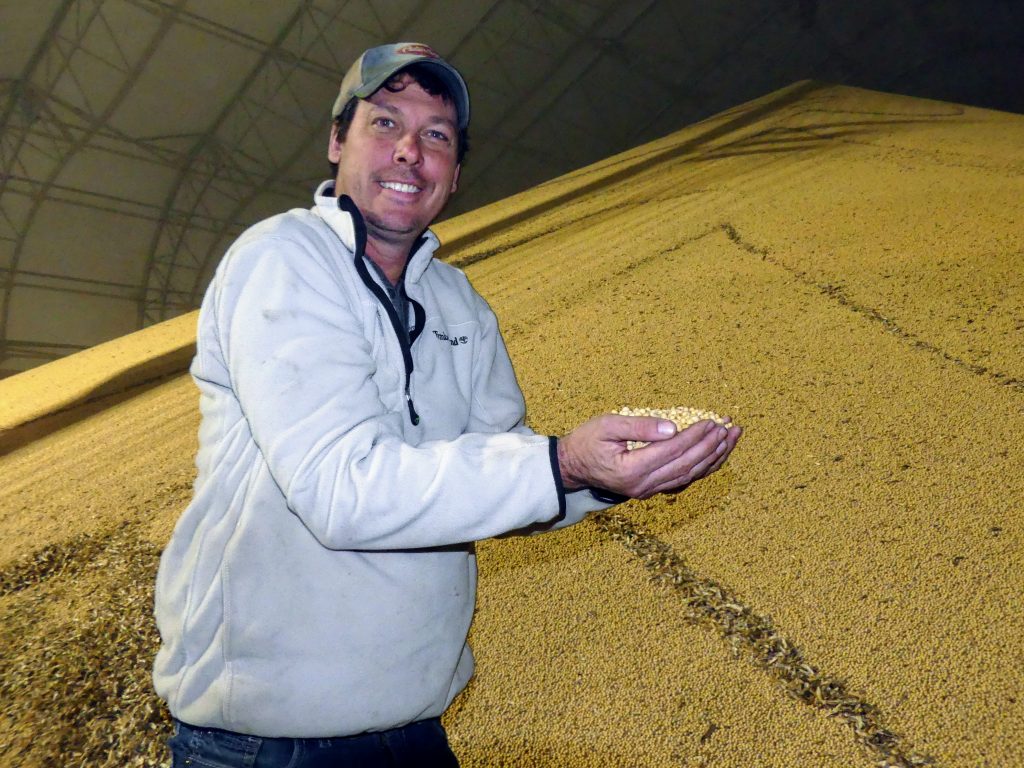 CHESTERVILLE — Three Eastern Ontario farmers managed to pull off “double-cropped” soybeans this fall — harvesting a crop planted in mid-summer after a yield of winter wheat from the same land.

While not unheard of in southwestern Ontario, it’s a rare feat in Eastern Ontario climate that generally doesn’t cooperate to allow a twice-per-season harvest here. 2021 was an exception.

“It’s pretty good to get two crops in one year. You never, ever see that. It’s just the way the cards fell this year,” said a grinning Michael Aube of Rutters Elevators, where the company’s nearby 55-acre field saw the unusual harvest Nov. 8-9.

Aube and his custom contractor Felix Von Gunten decided to try the unconventional idea after taking off winter wheat. The soybean seed went into the ground July 17, and Von Gunten returned with his combine 114 days later, pausing the harvest overnight as moisture levels made the mature soybeans too “tough” to finish in one shot.

“I always wanted to try it, but I just never had enough time,” Von Gunten said, as the sun went down on a clear November evening. “This year it just kind of worked out, and then we didn’t get a frost forever.”

An early snapshot on the combine yield meter suggested the beans were coming off at a rate of 40 bu/ac.

At the time of planting, Von Gunten was told the chances of yielding an actual soybean crop was about 5%, with a 30 to 40% chance of chopping it up for forage. “And the chance of using it for nitrogen and just putting it back into the ground was about 100%,” he quipped, “so, I said, OK, let’s try it.”

Von Gunten also planted 200 acres of his own double-cropped soybeans near the end of July. Despite their even later start, those beans reached maturity as well.

“They’re looking pretty promising,” said one of Van Gunten’s partners in the farm, Greg Westenbroek. “We looked at it as a cover crop, and it turned out we could combine it as well. It turned out alright.”

The growing season got off to a fast start and the wheat was ready for harvest 20 days early, allowing more time for the late-planted soybeans to emerge, grow and fill out. A killing frost didn’t arrive until late in October.

For Schneckenburger, the circumstances translated into 90 bu/ac of wheat, followed by 35 bu/ac of soybeans on the same land. He said a double crop should always be more valuable than a big single crop of soybeans planted in the spring, though he doesn’t expect to see another opportunity anytime soon.

“We’re never going to see it again,” he suggested. As a caveat, Schneckenburger added double-cropping could be the norm “in another 25 years,” depending on global warming.

Eastern Ontario crop consultant Gilles Quesnel described this year’s circumstances as “highly unusual,” with substantial heat units accumulated well into October and the late arrival of frost. “It’s the first time I know of where we had an early enough wheat harvest, combined with an open fall, to make a double crop possible,” he said.

A normal rule of thumb is that soybeans planted on July 1st will yield only 20 bushels per acre, declining further after that date, he said.

Of course, that’s already well beyond the ideal planting deadline. Though it depends on variety and conditions, soybeans planted after May 10 will generally lose about 0.3 bu/ac of yield for each additional day of delay, Quesnel said.