Farmers railroaded: CP tells property owners to pay for rail crossing upkeep or they get ripped out 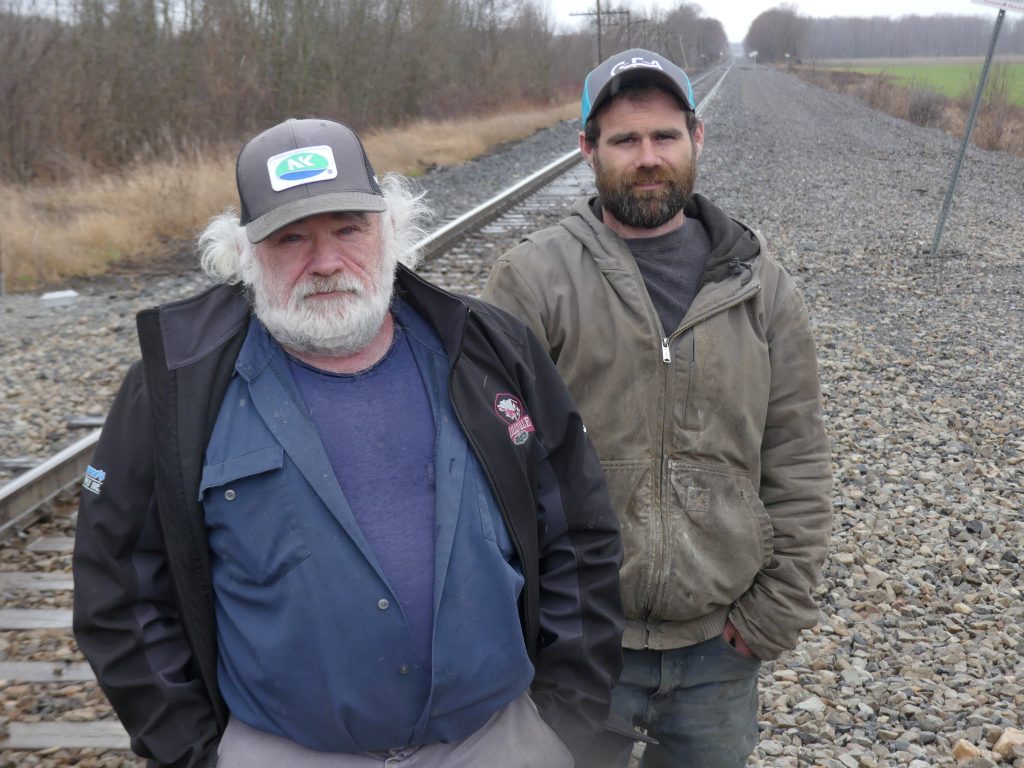 EASTERN ONTARIO — You can forgive farmers and property owners along the region’s CP Rail line for feeling railroaded. The company is coming after them for costs to maintain private crossings over rail lines.

CP is facing federally-mandated upgrade costs on private crossings on tracks the company  installed well over a century ago. But costs are so high that CP no longer wants to foot the bill alone.

So the company has told farmers it will rip out these crossings in their fields, laneways and driveways unless they sign a contract agreeing to foot the bill for immediate upgrades and pay for future CP rail maintenance.

A private crossing typically includes wood placed between the tracks to accommodate machine and vehicle traffic as well as earthen ramps up to the crossing itself.

Winchester crop farmers Ed and Estella Rose were surprised to receive CP’s take-it-or-leave demand for a signed agreement that would allow the farm’s continued use of a remote crossing at the back end of their property — their only access into a landlocked 40-acre field. The company’s terms included an estimated $1,491 for immediate upgrades to comply with the new federal regulations: $700 for new stop signs that only the Roses would see, $516 for improvements to theoretically accommodate a semi-tractor trailer, plus a crossing assessment fee of $275.

Estella Rose said they would also need a $5-million insurance liability policy, at a likely cost of between $1,200 and $2,000 annually.

They could say no to all of this, but then lose entry to their back 40 when CP removes their crossing.

She wondered aloud why they should pay when the presence of the rail tracks is of “no advantage” to the farm. “It’s a disadvantage.”

Rose also pointed out that CP’s new approach is far different from its attitude through most of the last 60 years the couple has farmed the property together. “They would fix the fence to keep the cattle safe (and off the tracks), and they would drop off a gate if you needed it,” she recalled.

At issue is the lack of a current agreement between affected property owners and the company because of a quirk of history. Rose said those affected are on land where the original railway went through prior to 1888. For whatever reason, those crossings lack documented agreements enshrining the farm-friendly treatment they’ve otherwise enjoyed for the last 140-plus years — creating a presumed opening for CP as it grapples with Ottawa’s upped standards in 2022.

“It seems fishy to me,” neighbouring dairy farmer Bill Lillico said. “So we’ve had free maintenance for all these years, and now, all of sudden, we don’t.”

Lillico has one affected  private crossing but concedes it’s not needed because his farm has alternative access via public road. He’s not apt to sign the agreement and will likely walk away from the crossing, he said.

By contrast, CP used to pay farmers to close crossings — in one local case in the early 1900s, Lillico reported, a farmer got $50 or tens of thousands in today’s money.

Lillico expressed interest in a group effort to push back against CP. “If we all got together, I wouldn’t mind taking part,” he said, suggesting they could chip in $200 each to hire a lawyer.

He doesn’t find CP’s quoted costs offensive in their own right, observing, “You can’t do anything for less than $1,000 today.” But he’s concerned CP might demand much higher costs in the future, after tying him down with an open-ended agreement without a term limit. And once signed, the agreement would also require him to cover the cost of removing the crossing, should he ever request it, Lillico pointed out.

“I think we should try to fight this together,” said farmer neighbour Dave Bryan. “They’ve got us where you don’t want to be.”

“The Canada Transportation Act assigns responsibilities for private crossings, and CP is trying to contact and assist all private authorities to understand the requirements of the regulations as much as possible.”

Transport Canada senior communications advisor Sam Lau told Farmers Forum that approximately 78 % of the country’s 9,000 private crossings do not yet comply with the new standards. “The vast majority of private crossings require only minor upgrades which may include brush cutting or installation of signage requirements,” Lau said by email. Private owners share responsibility for “managing the safety” of their crossings, under the regulation, he said.