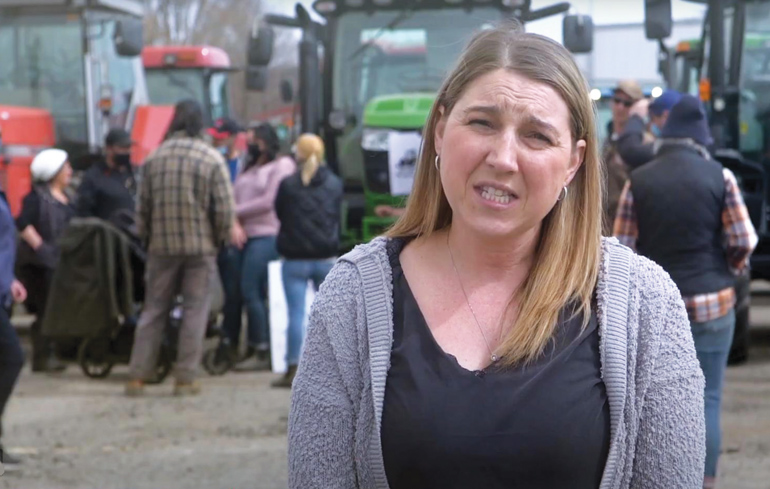 NORFOLK — The ramped-up regulatory burden on bringing temporary foreign workers to the farm had Simcoe-area vegetable growers so steamed they organized a March 23 tractorcade that drew over 250 machines.

They want the province to take control away from a local health official who has ordered heavy quarantine restrictions not seen anywhere else in Canada. Farmers also want to follow the model of British Columbia and Nova Scotia where the province, rather than farmers, manages hotel bookings, testing kits and quarantine timelines.

Protesters warned of a pending “food crisis” as the rules impinge on the labour needed to harvest fresh produce in the region. Event organizer Tiffany Chanyi highlighted how the local medical officer has used his provincially-enabled “Section 22” powers to prohibit no more than three workers from quarantining at a farm house or large bunkhouse during the requisite 14-day period even if the bunkhouse is suited for 50. Overflow workers must quarantine individually in hotels.

In addition to that one-of-a-kind restriction, the affected farm operators can’t pick up their workers at the airport as a group — even though they’ve often arrived on the same flight. Instead, only three may occupy the same vehicle (with the driver) if they’re headed to farm quarters for quarantine; if they’re going to a hotel, only one worker is allowed in the vehicle, under local rules set by Dr. Shanker Nesathurai at the Haldimand-Norfolk Health Unit.

Cathie Schonberger told Farmers Forum last month that her family operation had 18 workers due to arrive from Jamaica on April 1st. The local rule required them to ride in six taxi cabs instead of one charter bus or van. “That’s potentially putting six Canadians at risk instead of one,” she pointed out.
In Ontario, producers get $1,400 per worker to help defray quarantine costs — though Schonberger’s husband Frank said it amounts to only partial coverage and doesn’t alleviate the farmer’s great administrative burden.

The local board of health met on April 7 and declined to amend the rules “Farmers are very frustrated by the lack of action,” Schonberger added in an email.