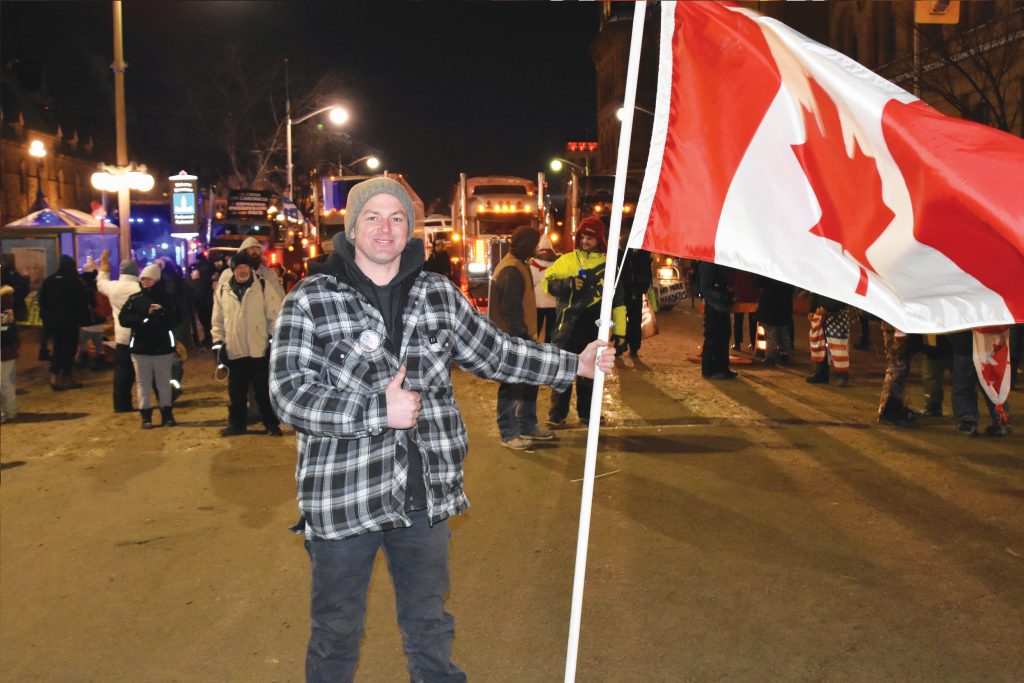 Hagersville, Ontario, crop farmer Kevin Veurink at the epicentre of the protest in front of Parliament Hill on Feb. 1. Horns and music blared around him. (Patrick Meagher photo)

OTTAWA — Jubilant truckers occupying the streets around Parliament Hill vowed to remain with their parking brakes firmly engaged as the freedom convoy protest approached its second weekend in Ottawa.

“We’re willing to stay until the end — months, it doesn’t matter,” DJ Wassenaar, a cash-cropper and co-owner of a related trucking and construction company from Jarvis, Ontario, told Farmers Forum.

Wassenaar arrived back at home in the southwestern Ontario town Jan. 31, after four nights parked near the epicentre of the protest at the head of Wellington, across from the Hill. One of his employees, a fellow fervent believer in the cause, took over minding the Kenworth tractor with sleeper cabin.

Wassenaar said he’s prepared to go back to the Nation’s Capital to relieve his employee.

The wheels could be removed from the truck if necessary to prevent it from being towed — a tactic other truckers are considering as well, he said.

“The pressure’s on, the energy is great,” Wassenaar exclaimed, clearly enthused at what he witnessed both driving to Ottawa and upon arrival. “It was cold, but it did not stop the people from coming out. They were incredible. They were warriors out there.”

If not for their masks, he said, the police officers on scene wouldn’t be able to hide their otherwise clear “excitement” and smiles at the rally.

He reported meeting recent immigrants who told him they were even more proud to be Canadian than on the day they took the oath of citizenship.

And contrary to media reports, he recounted a great welcome from the community. Donated food kept both himself and another employee fed. “People were walking up to my cab with coffee,” he said, “and I had the best beef burritos of my life.”

A hockey coach with access to a hotel room allowed truckers to use the washroom and shower facilities, he said.

Wassenaar also reported receiving enough e-transfers from supportive individuals and friends to defray all costs to date associated with having his truck in Ottawa. “It hasn’t cost me a cent.”

Ensuring all of those trucks don’t run out of fuel is a crucial next step, he suggested, adding that guys were talking about using side-by-side ATVs to haul jerry cans already being used to fetch diesel up to the machines.

Kevin Veurink, a cash crop farmer from Hagersville, explained that a fuel tank pulled up a few blocks away, behind a police barricade. He and others use a wheelbarrow to bring filled-up jerry cans back to their trucks.

Veurink’s transport is parked directly in front of Parliament Hill, on Wellington Street, draped in a Canadian flag and a sign that reads, “God keep our land glorious and free.”

“Everyone in my group from Western Ontario is going to stick it out until the job gets done,” he said, echoing Wassenaar.

He added that if they are still there in the spring, he will leave the truck in good hands to come home, plant crops and then return to the Hill.

Veurink called out the mainstream news media for tarnishing the freedom convoy with distorted facts. “It’s very positive here,” he said. “That’s how you bring a country together. I hear there are more trucks coming.”

Veurink said he spends a lot of time in the truck and his new trucker friends with rooms in nearby hotels, sharing keys with him so he can shower. Free food is everywhere. Barbecues set up on the streets offer farmers free burgers, hotdogs and even pancakes. Supporters pass around bottled water, Gatorade, apples, bananas, chocolate bars, coffee and cupcakes. There are so many supporters with so much food that Veurink says he has to turn down about half of what he is offered.

Blenheim-based Chris Van De Wiele, at the wheel of a transport pulling a sailboat, said he was willing to stay in Ottawa “as long as it takes … till the job is fulfilled.”

“This is to protect all Canadians from government overreach, to stand for choice,” the Kent Farm Supply employee said, adding that participants are “not here for violence or destruction.”

“We are here to take back Canada for the people. This is not about crossing borders as the mainstream media would like the people to believe with their government-funded media machine.”

He said he was graciously hosted at the home of an Arnprior couple who recently fed him breakfast and did his laundry.