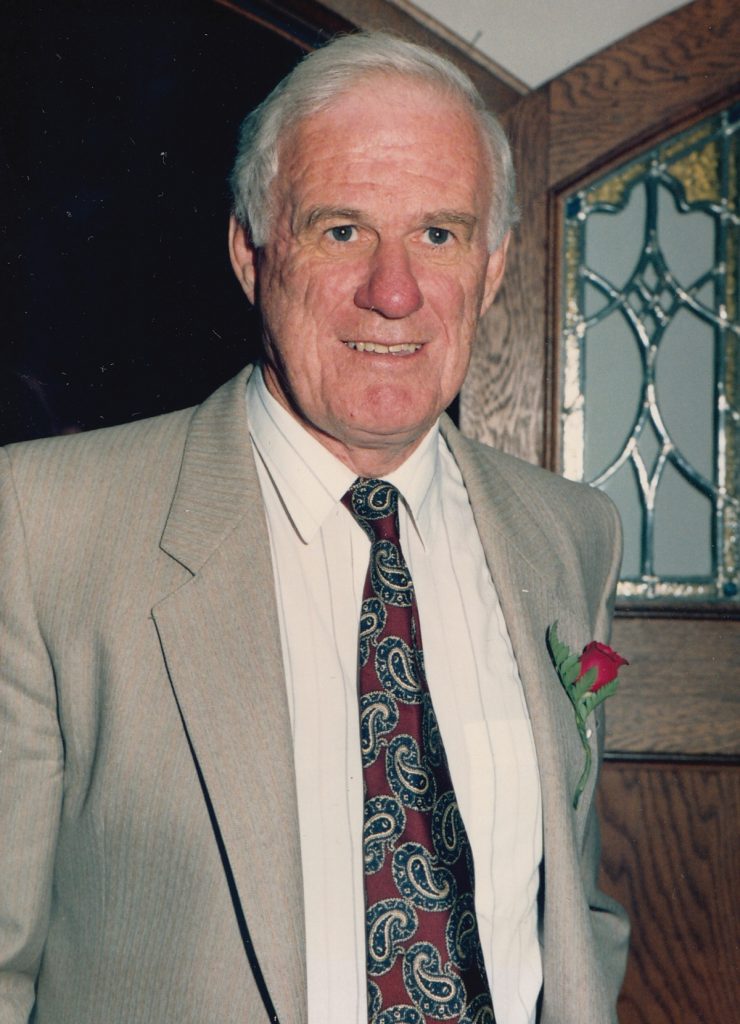 OTTAWA — The founder of Farmers Forum newspaper, who also taught a generation of farmers at Kemptville College, was little known for being among the last of the Canadian soldiers standing at the front line on the night of the ceasefire in the Korean War.

Terry Meagher died in his sleep at the Perley Veteran’s Hospital in Ottawa on January 26. He had moved from his longtime home in Kemptville only four months earlier. He was 88.

Meagher grew up in Nova Scotia, the second-oldest of eight kids and son of a train station master. He loved hunting and fishing and baseball. At age 18, he wanted to fight in the Korean War and joined the army. When he got home he told his mother and she gasped:” Oh my God, you’ve joined the suicide squad.”

He joined the Airborne, an elite military group of paratroops, and trained a mere five months in Wainright, Alberta, before he was shipped across the Pacific Ocean with the Royal Canadian Regiment and saw action before he knew it. He was 19 in the fall of 1952 at a military battle training school in Japan.

They used real bombs to simulate battle. One Canadian picked up an unexploded bazooka shell and it exploded in his hand. He was killed. The blast blew the legs off the soldier standing next to Meagher and he died almost instantly. Schrapnel pierced Meagher’s chest and as he lay on the ground and realized he wasn’t spitting blood, he figured he would live. He watched British soldiers running toward them, clicking bayonets onto the end of their rifles. He wondered if they were going to put him out of his misery. Instead they thrust the bayonet ends into the dirt to hold up ponchos and keep the sun off the living until ambulances arrived. Eighteen soldiers were injured and two died. It was his third day in Japan.

Three weeks later, and with pus still coming out of his side, he was on a boat for Korea. He had never seen a helicopter before and when he sailed into the Inchon harbour, “there were 50 of them,” he recalled in a recorded interview about six months before his death. After a long train ride, the Canadians marched five or six hours and he knew they were almost there when he passed signs in English that read: “You are under enemy observation” and “Civilians will be shot after this point.”

After only a few days, he was at Hill 355 and under artillery fire. The battle lasted at least three hours. Meagher was in a slit trench firing a bren gun as a South Korean soldier passed up lines of bullets. “Battle like that is total chaos,” he said.

While the Chinese from the North Korean side were still firing, an officer told him to get blankets and take 12 men and bring back the dead. He didn’t get far in the dark. He came upon another Canadian who suddenly turned but didn’t recognize him and pointed a rifle at him and froze. They stood looking at each other as Meagher called out his name. Then they heard Chinese shells falling and both dove to the ground. Meagher then sprang up and ran.

He recalls about 30 soldiers were killed in hand-to-hand combat that night. Meagher was one hill back from the main fighting. “I was mad that I didn’t get to go but God actually did me a favour. Sometimes you don’t recognize your good fortune.” Their platoon sniper Jim Gunn got captured that night. He buried his rifle before surrendering as the Chinese didn’t have infrared on their weapons.

Meagher’s night job, when he wasn’t placing barbed wire, was to head out into the Samch’on Valley looking for enemy tanks. They were three, including the dog handler and his German police dog trained to stiffen and point at the smell of Chinese soldiers. Meagher would radio back the location of a Chinese tank and then get out as fast as possible. The artillery was about 10 kilometres back and not always accurate. They had infrared goggles and one night they froze, along with the dog, as a small group of Chinese soldiers walked passed them, about 15 metres away.

Some nights he went on patrol to monitor enemy movements and said the Chinese had terrible aim. He once got lost and a sniper tried to take him out but the best he could do was two-arms lengths away.

He was on Hill 187 for the final three months of the war. In one of the last battles artillery shook the hills and grass fires burned everywhere. The night of the ceasefire in July 1953, he saw bonfires across the Samch’on Valley and heard the enemy singing and beating pots in celebration. He was amazed the next morning as he looked out and saw what he figured were thousands of Chinese soldiers. He also watched as groups of soldiers dug out camouflaged tanks that he couldn’t find. He couldn’t leave the front lines for days because the road was only one way — the brass who ran the war but had never seen it were all headed north to get their first look at what remained.

Meagher would later tell his children that the only virtue in war that mattered was courage and that you never ask a soldier if he killed someone.

Back in Canada he quit the army after about six months and studied at St. Francis Xavier University in Nova Scotia. He then went to teacher’s college in Toronto, where he met his Dutch wife Marina, the daughter of Phillips company president for Canada, Ten Van Dyk. They had three children.

After teaching in various high schools, Meagher began teaching English and communications at Kemptville College in 1971 and also began a writing career. At around the same time he met a group of evangelical Christians and said he witnessed a miraculous healing that changed his life. For years he would lead prayer groups and bible studies and toward the end of his life would sit in his recliner almost daily reading from scripture. 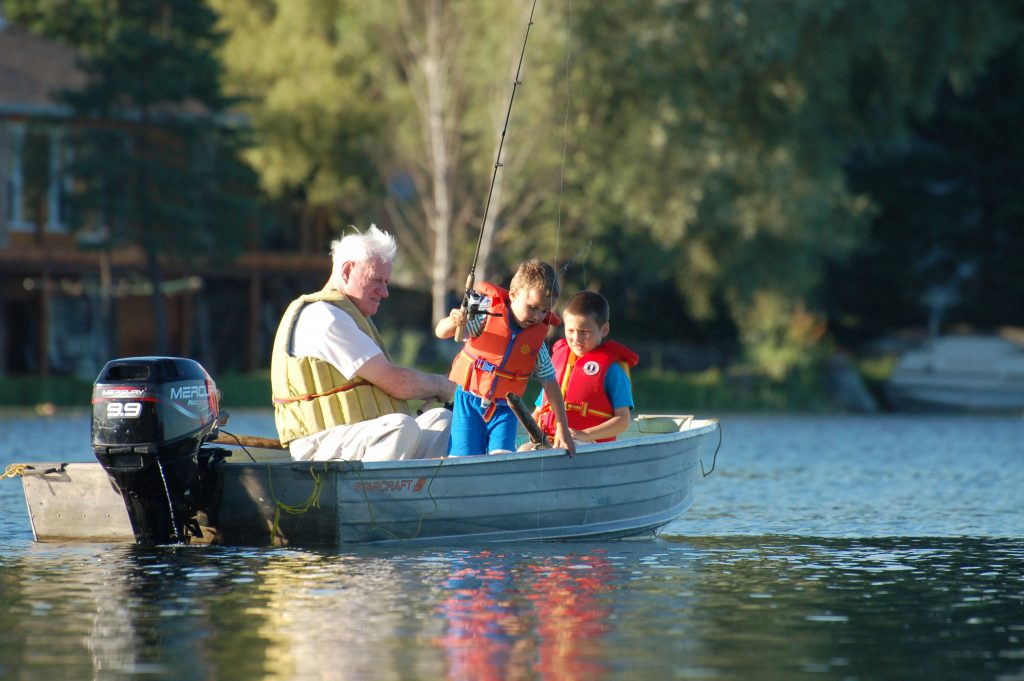 About 10 years before his death, Terry Meagher goes fishing with grandsons Nicholas and Santiago at his cottage in Delta, Ontario. 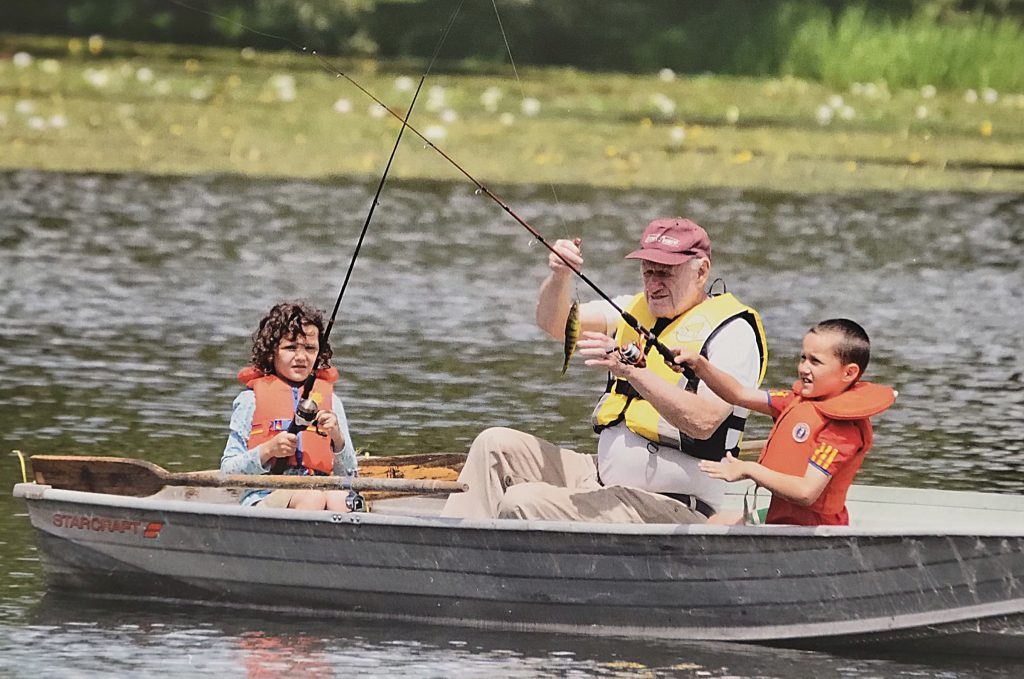 After 22 years at Kemptville College, he retired in 1991 and a year later launched Farmers Forum, where he worked for another 22 years. He first ran the newspaper out of his basement and financed the operation with his bank account for the first five years. He sold Farmers Forum to one of his sons in 2001 and retired around 2012. It’s not easy to pinpoint a retirement year as he often announced he was retiring but loved drinking coffee and joking with buddies in the front office and answering the telephone. One day when he announced it was time once again to retire, he was asked, “What does that mean, exactly?”

“It means I don’t come in on Wednesdays,” he said, grinning from ear to ear.

He had a great memory and he awed many by his ability to know so many people by name. He was once asked how he knew so many farmers. “I taught them all,” he replied. He became the consummate reporter. He ran into Osgoode dairy farmer Steve Velthuis after Mass one Sunday and they began talking shop. When the conversation became a story in the newspaper’s next edition, Velthuis later caught up with Meagher’s son and said: “Tell your father that the church steps are off the record.” They both laughed.

Provincial agriculture minister Helen Johns once called Meagher and asked him why he gave her such a hard time. “I give every (politician) a hard time,” he said.

He was not one to sit still. He played badminton and tennis until he couldn’t run anymore. After Farmers Forum, he put his energy into Veterans Publications, a company he started to help army veterans publish their memoirs. He wrote a few books, including two college English textbooks and Betrayal: Canadian Soldiers in Hong Kong, 1941, which was lauded by the Ottawa Citizen, the National Post, and others.

The History Channel flew him back to Korea to produce a documentary on the war. He was amazed that the 24-hour train ride from Inchon to Seoul was now just over two hours and wept as he recalled all of his old friends who died. When he returned home he said he finally understood why Canada went to war, praising Korea’s freedom, bustling economy and happy people. Until his dying days, he would receive gifts of gratitude from the Korean Embassy.

Terry was also a founding member of Korea Veterans Widow Advocate Association that fought to get better assistance for veterans’ widows.

He became more focused as he aged. Every visit with family and every phone conversation ended with “May God bless you.”
He is survived by his wife, Marina; son Joe and his wife and two children; son Patrick and his wife and seven children; and daughter KC and her husband and one child.  He is predeceased by grandson Francisco.

A memorial Mass for Terry Meagher was to be held at Holy Cross Catholic Church in Kemptville, Ontario, on Monday, Feb. 7 at 11 a.m. The Mass will be celebrated by Fr. Raymond de Souza.