Rules of the road not well understood by police and farmers 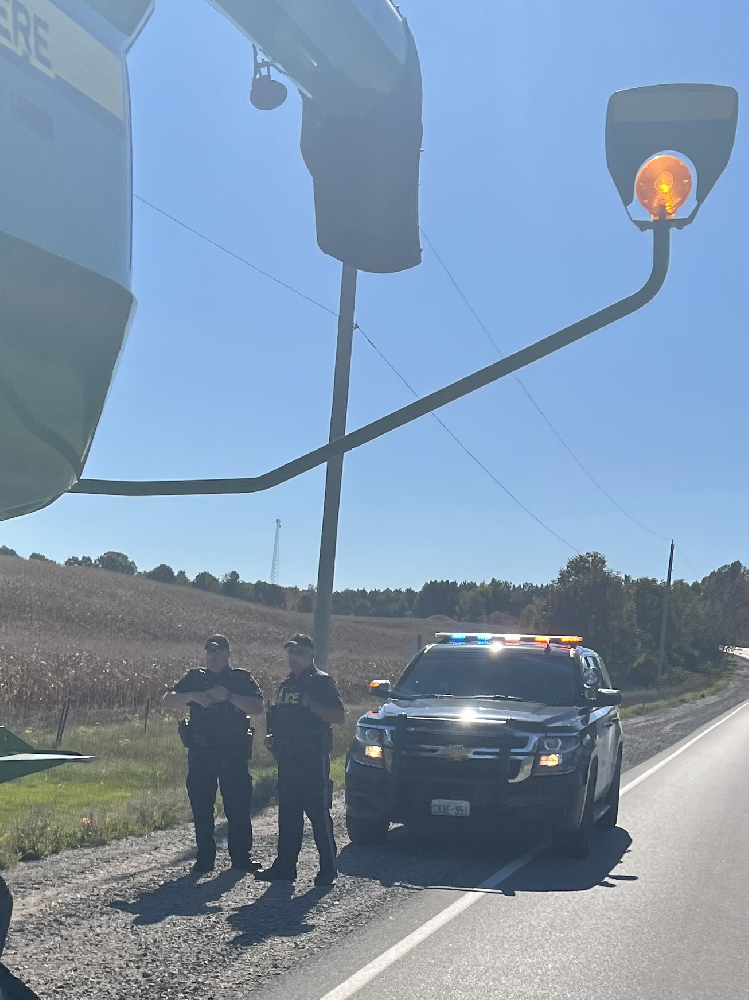 Farmer Mike Sternberg snapped this photo after being pulled over in his combine and after calling 9-1-1.

EASTERN ONTARIO — A combine-driving Ontario farmer recently called 9-1-1 on an OPP officer who pulled him over. The odd incident shows that police often aren’t well versed on the rights of farm machinery using the road, according to rural and farming advocates.

Simcoe County cash-cropper Mike Sternberg, 60, says a “rogue” police officer stopped him around 3:45 p.m. on Sept. 30 as he drove his new combine from the dealership to his farm at Orillia. He says the officer demanded to see his “licence” to operate the John Deere unit after telling Stermberg he was going to be charged for blocking the traffic behind him. The officer also told him he would be ticketed for refusing to produce a driver’s licence, at which point the farmer says he got back in his cab and made the emergency call.

Of course, no licence of any kind is required to drive a combine, and when marked with the required slow-moving sign, the driver is under no obligation to pull off and let the traffic behind go by. It’s all in the Highway Traffic Act, which exempts farm tractor and combine operators from licensing and only requires them to be at least 16 years old. The law also spells out the obligations of other drivers when coming upon a farm machine bearing a slow-moving vehicle sign. They must wait to pass until it is safe to do so.

“Clearly, a (marked) slow-moving vehicle is legally allowed to drive slowly down the road as long as it is not blocking oncoming traffic,” said OFA policy researcher Ian Nokes.
The driver is not obligated to pull off the road to allow vehicles at rear to pass, Nokes said. In fact, pulling off the road for traffic is considered dangerous because the shoulder might be weak and pulling back onto the road could also pose a hazard, he said.

“It’s up to the operator of that slow-moving vehicle if they pull over,” concurred Ontario Landowners Association President Jeff Bogaerts, who works as a paralegal and is a former police officer.

Bogaerts said the driver of any vehicle, including a farm vehicle, is required to at least verbally identify themselves and does not have to provide any other form of identification.

Bogaerts attributes the confusion to poor police training and whether an officer has previous experience in a rural environment. “When you’re a constable in downtown Toronto … it’s not the same as if you’re in Parry Sound,” he said.

“Most of the OPP officers don’t know the rules about farm machinery on the road. They just don’t know,” observed hay farmer Gordon Smith of Chesterville, a 40-plus year member of the Dundas Farm Safety Association.

Smith says his organization recommends that farmers download an online rules booklet — Farm Vehicles on Ontario Highways — to store in the tractor in the case of being stopped by police.

In Sternberg’s case, the situation was resolved when a sergeant showed up at the scene in response to his 9-1-1 call. The farmer says the two men in uniform spoke for 10 or 15  minutes while he waited in the cab. He says he was finally allowed on his way, without charge, about an hour after being pulled over. He was driving three hours home with the combine — minus the harvest head — after purchasing it from a dealership.