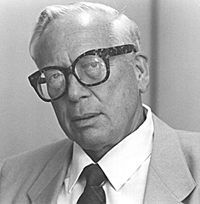 TORONTO — Long-time Farm and Country newspaper publisher, editor and journalist, John Phillips, died in Toronto on May 27. He was 88.

The charismatic and outspoken publisher of what was once the leading farm newspaper in Ontario had a long career of influencing farm politics and never shied away from a controversy. While at Farm and Country, he broke all the rules and shared its mailing list with then Kemptville College professor Terry Meagher to help launch Eastern Ontario Farmers Forum newspaper from Meagher’s basement in Kemptville.

Phillips became editor of Farm and Country in the 1960s at a time when the newspaper was the house organ of the Ontario Federation of Agriculture (OFA). Over the next 10 years, he turned the newspaper into the most powerful farm voice in the province. He teamed up with former OFA president Gordon Hill and together they led and directed agriculture through the late 60s, 70s and 80s. It was widely believed that Phillips was the background brains and Hill was the man who manned the barricades. They became lifelong friends and together fought battles against hydro and pipelines, promoted marketing boards and attacked forces and policies that attempted to weaken or destroy rural prosperity. There was significant rural poverty in those days and the two men fought to change that.

Remarkably, after only a few years of stirring the pot, the who’s who of agriculture climbed aboard the Phillips and Hill train of progress. That included the Ontario minister of agriculture, his deputy minister and a string of federal ministers of agriculture.

Phillips was also the main author of Challenge of Abundance, the most important document for agricultural progress for 20 years after it was published.

After Phillips retired in the mid-1990s, the plug was pulled on Farm and Country. Phillips began writing as a columnist for Farmers Forum and encouraged the paper to expand across Ontario. It finally happened, 12 years later. Phillips continued to offer encouragement to the independent newspaper that he inspired.

“He went out of his way for us. He gave us ideas and was a big support,” said Meagher, who became a close friend. “He was tough. He never gave up. He was like a dog on a bone.”

Meagher’s son, Patrick, now publisher of Farmers Forum, got his start in journalism with Phillips. “He was a very kind and generous man,” Patrick said. “I admired him. He was a man of action. It was always exciting to be around him.”

Phillips was born on a farm in Britain and became a member of the Royal Air Force and a jet pilot flying Sabre jets. In Canada, he joined the Royal Canadian Air Force and went on draft to the American Air Force in Korea in 1953. But the war ended, the draft was cancelled and he left the army. He once said he didn’t get along well in the army because he always went against the grain when he didn’t agree but they wanted him because he was an excellent rifleman.

He was a sharpshooter and “shot at Bisley” in England, a great honour where the best rifle shots in the Commonwealth competed. Much later, living in Toronto, his neighbour complained of a rat’s nest in the backyard. Phillips solved the problem. He got out his rifle and waited, picking off the rats one-by-one.

Phillips married the daughter of a South African master leaf blender for Rothmans International, a British tobacco company, and together they raised five daughters in Toronto. His wife died more than 10 years ago.

Phillips was a deeply religious Catholic, devoted to praying the rosary daily and going to daily Mass.

He had an “iron will,” recalled his daughter Petra.