Farm income to drop: Won’t be record-breaking money maker like 2014 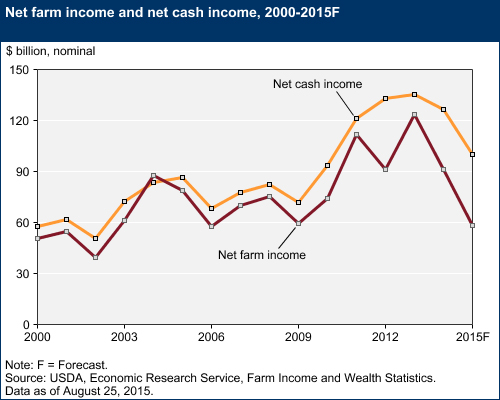 TORONTO — A recent U.S. forecast predicting a 36 per cent farm income slide this year may have farmers a bit antsy, but while a downturn is likely, Canadian farmers may be in for more of a return-to-normal year, suggests an economist with BMO Capital Markets.

“From a historical perspective, it’s not as serious as some headlines would suggest, but it’s certainly a big swing following a couple of strong years,” says Aaron Goertzen, who compiles monthly agricultural forecasts and emphasizes it’s hard to generalize across the entire industry. “The hit that crop producers may take is not likely to be offset by strength in the livestock sector. Outside of maybe cattle, I don’t think there’s rampant optimism.”

In a revised forecast released in late August, the United States Department of Agriculture predicted farm profitability would decline for the second straight year. It expected net cash income to drop 21 per cent from 2014, driven by lower crop and livestock receipts, and net farm income to decline 36 per cent — the lowest since 2006 and the largest drop since 1983.

The latest Canadian figures, released in February as part of the 2015 Canadian Agricultural Outlook, show a more modest decrease.

AAFC predicted the biggest change would be felt in the crop sector. Grain and oilseeds receipts faced an expected decline of four per cent to $27.9 billion, largely due to softening prices resulting from a U.S. bumper crop in 2014 and high world stocks.

But crop prices in mid-2015 are still about 50 per cent higher than they were 10 years ago, Goertzen says.

“If taken in historical context, it isn’t doom and gloom,” he says, adding that a weakened Canadian dollar helps offsets low crop prices while lower energy costs and interest rates are taking pressure off the expense side.

Livestock has a more mixed outlook, he says.

A combination of a small North American cattle herd and low feed prices will continue to buoy the cattle sector. But with porcine epidemic diarrhea virus now largely under control, hog prices are expected to return to normal levels.