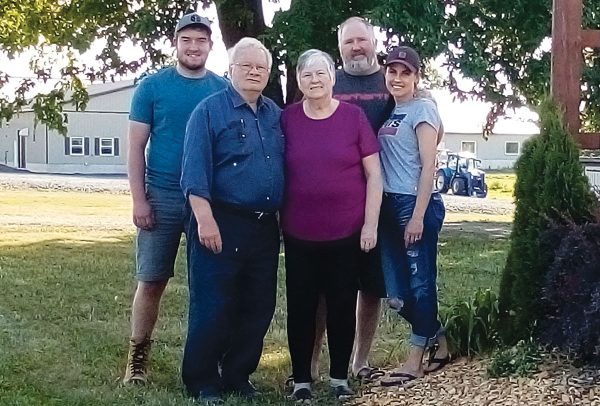 MAXVILLE — Owning his own farm was this Second World War veteran’s biggest dream. And Kenneth Jack made it happen. Seventy-five years later and Mylyn Farm is still operating, now owned by his grandson Charlie Jack.

Mylyn Farm is a dairy operation with 200 cattle, milking 75 purebred Holsteins. The Jack family also cash crops corn, soybeans, and hay. They own about 700 acres and rent another 300.

Three generations ago, young newlywed Kenneth Jack made a down payment on a 140-acre farm through the Veterans’ Land Act, which gave ex-servicemen government loans to buy land. The old barn was built in 1880 and the farm had been in use since around that time, according to the neighbours. The Jacks moved in on July 2, 1946.

“It was kind of a rundown farm, that’s what they could afford,” explained Peter Jack, 73, son of Kenneth and Margaret.
Peter said his father, born in Montreal in 1913, had always wanted his own farm and worked on a number of farms in Western Ontario until he joined the war effort in 1942. He became a military driver mechanic and hauled material down from Scotland and unloaded it on the English docks to be picked up by landing crafts.

During military training in Dundurn, Saskatchewan, Kenneth met his wife. They were married when he came home from the war in February of 1946. They moved in with Kenneth’s parents while they searched for a farm to purchase.
“It’s what he always wanted to do. He worked in an office in Montreal for a little while before the war and he just hated that. He liked being outside and working on farms,” Peter said. 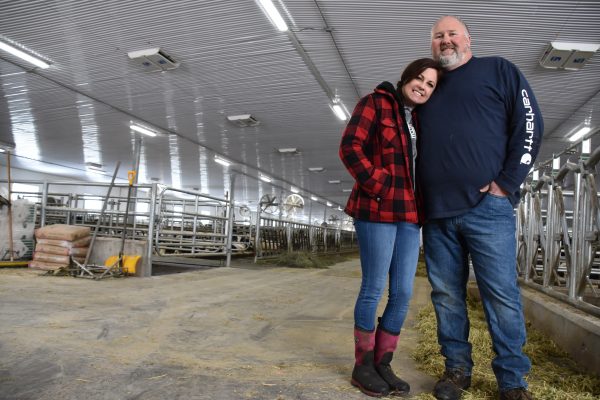 Margaret was a school teacher while her husband ran the farm. Sadly, the war had cost Kenneth his health and he wasn’t capable of doing a full day’s work. He was injured in England while escorting a road convoy and for the rest of his life he had a bad hip, which never healed properly. So too the mental trauma of living through the war was long-lasting.

“If it was today, he would’ve been diagnosed with PTSD (post-traumatic stress disorder). It wasn’t called that then. They discharged you from the army and you were on your own, have a nice life. There was no help for them then,” explained Peter.
Peter says he remembers the arduous work of his childhood on the farm. They cleaned the stables by hand. They cut hay and grain with horses, no tractor. Peter helped out on the neighbour’s potato farm and earned $6 a day as a picker.

Weekends were non-existent, every day was a workday. When Peter started attending Kemptville College, he never stayed a single weekend there. He would leave for college Sunday night after finishing his chores and come back Friday after school to do more chores.

Peter married Lynda (the farm is named after her) in 1973. Just four months later, his father’s bad health caught up to him. “He had three heart attacks at 40 and he’s lucky to have survived. He was only 60 when he died of a massive blood clot. So, all of a sudden one day, ‘The farm is yours.’ I was 25 when I took over the farm,” Peter said. “A bunch of things in my life I’ve kind of wandered into. I didn’t have a real passion for farming, but it was a family farm and it was important to dad and I knew he couldn’t do it without me.”

Kenneth and Margaret had three children. Peter took over the farm and the two younger sisters became nurses. Peter expanded the farm and made his own improvements. He modified the old barn and grew the herd.

Peter and Lynda had six children, two boys and four girls. They were all told, “‘If you want to farm, we’ll make a place for you,’” said Peter. Charlie was the only one with an interest.

In 2013, the herd was transferred to Charlie, who now runs the farm with his wife Tammy. They have a combined family of five children, who all live on the farm. Charlie continued to expand the farm, buying three more farms over the years.
After a devastating fire in 2018 that destroyed nearly all the farm buildings, silos, machinery, and killed 80 head of cattle, the Jack family rebuilt. Their new free stall barn has a double 10 swing line milking system. Charlie and Tammy milk twice a day, splitting the job.

“I still work here. I haul wagons and I do all the farm books,” added Peter, who lives with his wife and youngest daughter in the big farmhouse on the property. “I still go to the barn twice a day and do chores. We haul hay, I load. It’s not hard work. You get stuff done.”

Peter’s grandson Brennan MacKillican, the 20-year-old son of Peter’s daughter Kathleen, has been working part-time on the farm for a few summers now and has recently moved there to work full-time. With the help of young blood, Peter says he’s hopeful the farm can stay in the family and reach a century of existence.