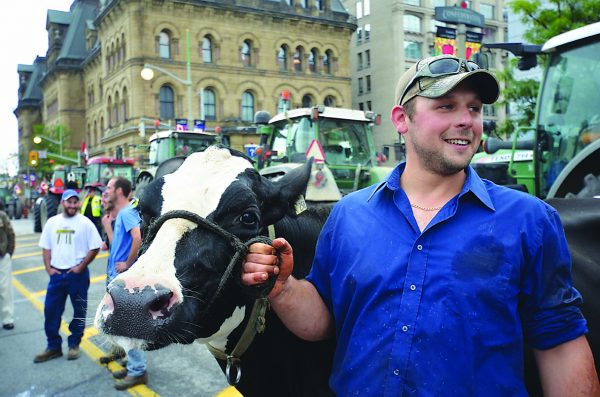 OTTAWA — Canada’s role in the Trans-Pacific Partnership will not see the dairy industry lose 18.25 per cent of its market, despite rumours to the contrary.

The day before the federal election, Liberal Senator Celine Hervieux-Payette wrote on the Huffington Post website that “While it is true that TPP countries get access to 3.25 per cent of the dairy market for the first five years, the total amount to be opened is in fact 18.25 per cent.”

The Dairy Farmers of Canada (DFC) called that statement a “critical factual error” and “completely false.”

“Let me be clear: 18.25% is a staggering number, which, if it were true, would have devastating consequences for our industry,” wrote DFC chair Wally Smith the day after the election. “It is a number we would never even consider discussing, let alone accepting.”

The DFC said the 3.25 per cent of dairy access allowed under the TPP still stands. The Dairy Farmers of Ontario said a 3.25 per cent access would amount to 250 million litres of displaced milk.

According to the United States Department of Agriculture, the TPP deal will see access to seven dairy products grow by a small percentage of the total dairy market within the first six years of the deal, and will then increase by a pre-determined compound growth rate each year for the following 13 years.

Here’s how the new imports breakdown:

50,000 tons of new fluid milk will be allowed into Canada after the first 6 years of the TPP. That’s 1.6 per cent of total Canadian milk production. Milk imports will rise 1 per cent of new milk imports each year after that for 13 years. After 19 years, a total of 56,905 tons of new milk will be allowed into Canada. That’s a total import increase of 1.8 per cent of Canadian milk production (3.17 million tons in 2014).

Some products, such as low-fat powders, will see a three per cent growth rate from years six to 19.

These numbers will be on top of what is already allowed into Canada. Looking at what was brought into Canada in 2014 and what will be allowed by the end of the 19 years, Canada will see total imports of 130,954 tons of fluid milk, 8,047 tons of butter and 25,684 tons of cheese.

Another seven dairy products — including cream, ice cream, and natural milk constituents — will also have a set number allowed by the TPP agreement by the end of year one, and will grow at a certain percentage for 13 more years.

The DFC told Farmers Forum Oct. 20 that their researchers are still going over TPP details and are in the process of crunching the numbers.