BREAKING NEWS
17:22
Home News Ending animal cruelty: How Ontario milk board would have handled the beating of cows on a B.C. farm and how canes are no longer acceptable

Ending animal cruelty: How Ontario milk board would have handled the beating of cows on a B.C. farm and how canes are no longer acceptable 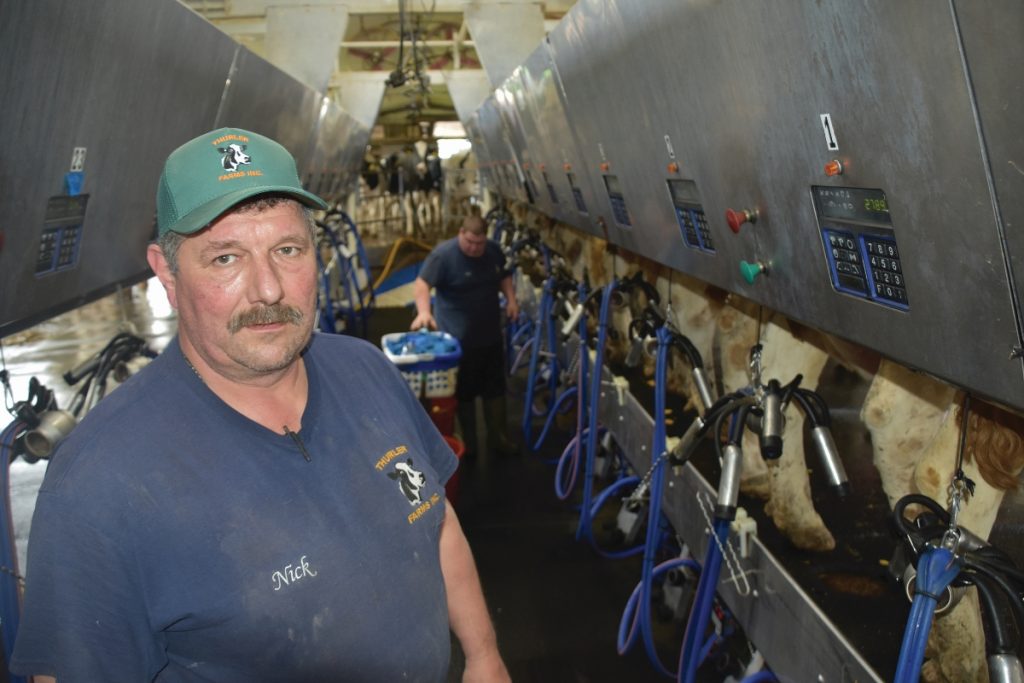 Dairy Farmers of Ontario board vice-chairman Nick Thurler says a cane hasn’t been inside his barn for 20 years.

EASTERN ONTARIO — After video surfaced of cattle being beaten in a Fraser Valley barn in August, the British Columbia milk board suspended milk pick-up for three weeks. It now means that the farm requires third-party oversight for one year, regular visits from a veterinarian and staff training. It would elicit a similar reaction from the Dairy Farmers of Ontario if the events happened here, says the DFO board vice-chair.

“We would stop picking up the milk until the issue is fixed, until they have protocols in place, trained staff, to ensure that it doesn’t happen again,” DFO vice-chair and Brinston dairy farmer Nick Thurler said. “We’re not going to put up with animal abuse.”

Refusing to take milk from the offending farm until they clean up their act “is one way to deal with it, and then they have to go through a proper investigation, put a plan in place to get rid of that [abuse] … and start shipping again,” Thurler said.

At Cedar Valley Farms in B.C.’s Fraser Valley, the province’s milk marketing board suspended milk shipments in late October when video from hidden cameras surfaced through an animal rights organization on YouTube. Shipments resumed in mid-November — sparking protests outside a local veterinary practice.

B.C.’s Society for the Prevention of Cruelty to Animals is investigating and charges are possible. One of the B.C. farm family members is a veterinarian.

The footage comprises a five-minute video of snippets capturing workers as they beat and whale upon Holstein cattle with canes — seemingly hitting with all their might. Workers are shown heaving newborn calves onto carts and in one sequence a female worker repeatedly kicks a mother cow in the side as she tries to stay close to her offspring.

In another sequence, on what appears to be a rotary milking parlour, a man strikes a cow around the head, back and face as the animal jumps and lurches on the spot, awkwardly twisting its head away from the unrelenting onslaught. The worker raises the cane above his head and swings hard with each blow. It sounds like a hard hockey slap shot as the cane hits the head, neck and back. The cow’s chin eventually comes to rest on a gate as it struggles to remain upright while the beating continues. The cow appears stunned and collapses on the floor after being hit for the 13th time.

Also shown is a lame cow hoisted up and dragged like a limp rag attached to a front-end loader with a hip clamp. A similar sequence shows another cow raised on the forks of a skid steer loader.

Another scene shows an attempt to euthanize a cow with a bolt gun. As she lay dying and twitching in a pen for what the narrator says lasts for minutes, a worker returns to deliver a second shot to the animal’s head with a bolt gun to finish the job.

“There’s no use for that,” Thurler said. “First of all, it’s just stupidity. You can’t treat animals like this. Nobody would and nobody should.” If such a thing were to occur in Ontario the DFO’s response would be “pretty harsh.”

That said, Thurler added that DFO has never seen a case like Cedar Valley Farms but acknowledged that in any organization there can be a bad apple behind closed doors.

All of the milk marketing boards in the country require their producers to adhere to the animal welfare and stewardship standards laid out in the national proAction program that first launched in 2011, he pointed out.

Thurler was asked how a good dairy farmer would handle their cattle. On the beating of the cow in the parlour, one might surmise the worker was trying to force the lone animal out of the carousel. But Thurler explained that attempting to persuade a cow to move from an unwanted place with a truncheon or cane is senseless.

“There’s no use beating her because she doesn’t know where to go. It looked like she had to back up. The practical way would be to push her back or somehow move the rotary parlour a bit or take a gate off or something,” he observed, also agreeing that patience and common sense are key and that a farmer should be handling the animal with his bare hands. 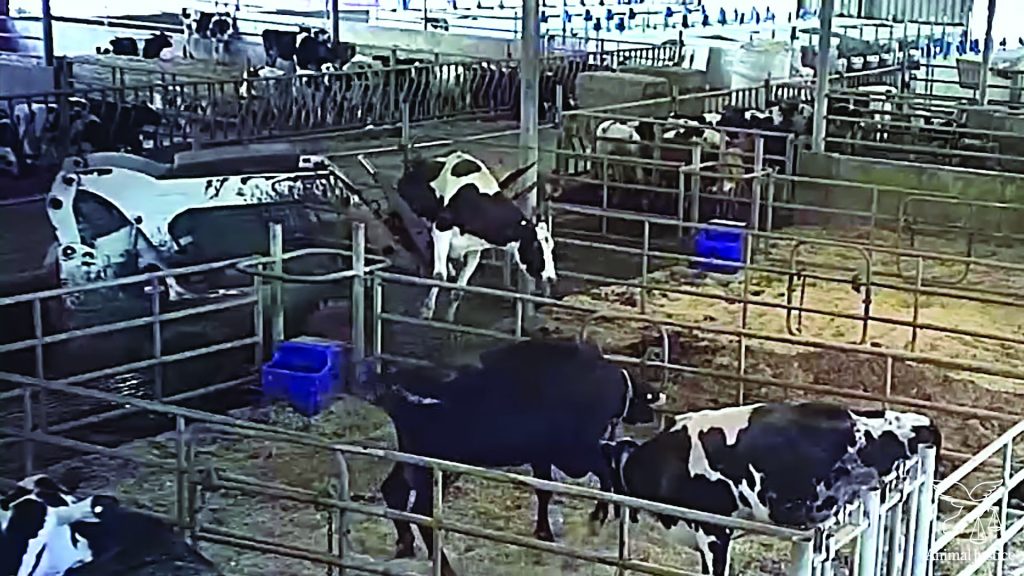 An August video surfaced in October and milk shipments from this B.C. dairy farm were immediately shut down. A cow hangs from pallet forks on a skid-steer loader in a screenshot from the video. 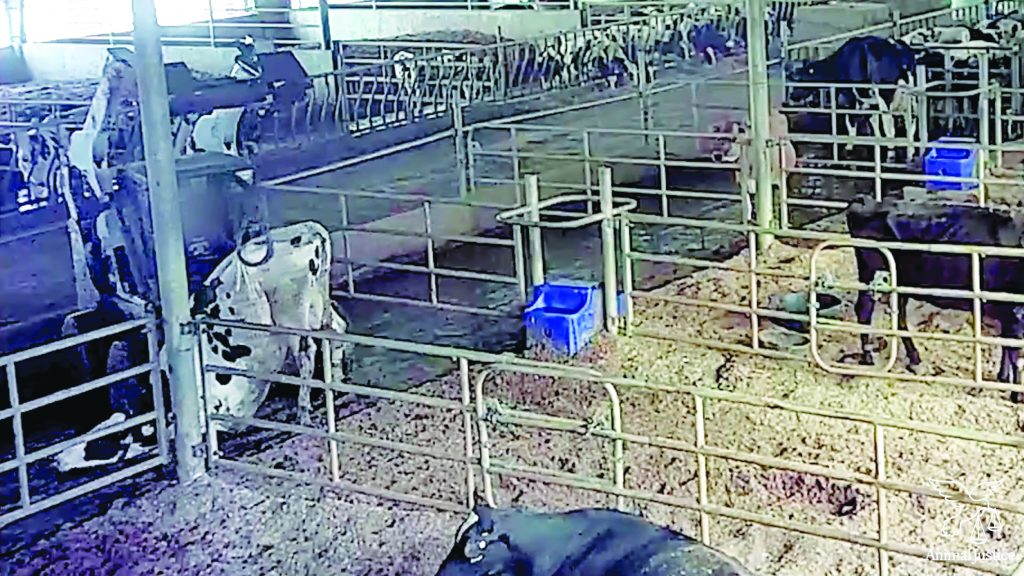 A skid steer is used to haul a cow, in this image from the video. 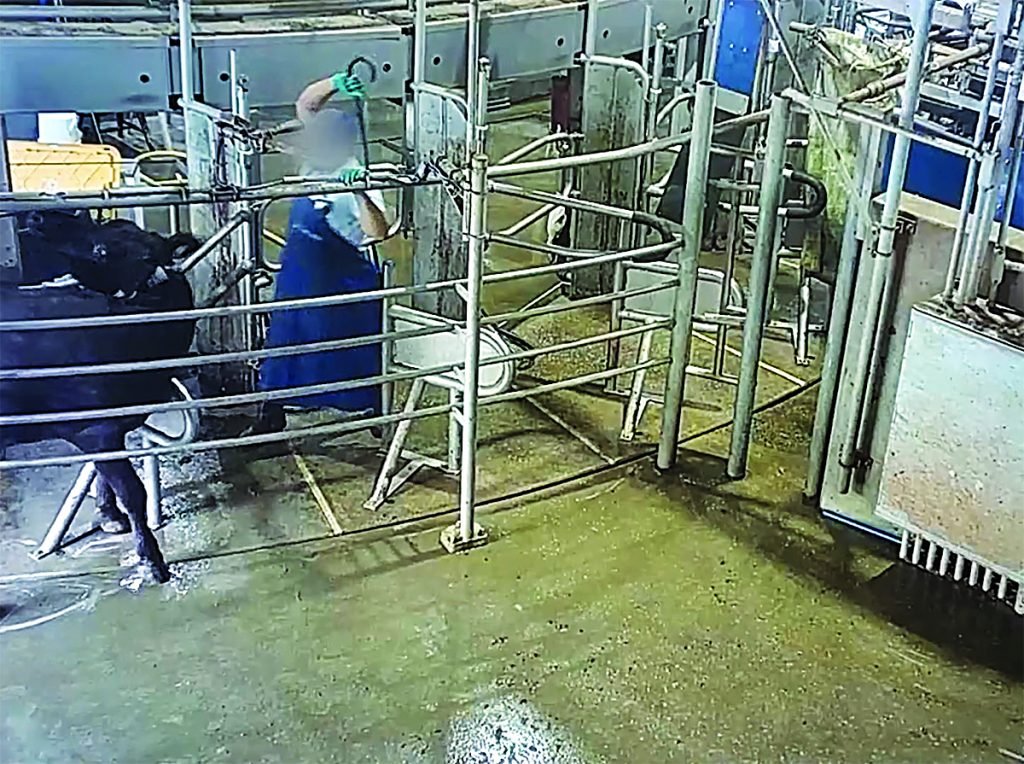 A worker repeatedly hits a stuck cow with a cane until it collapses.

Canes and cattle prods haven’t seen the inside of his own Brinston-area dairy farm for the last 20 years, said Thurler, who also reported that Canada’s updated national dairy cattle code is expected to ban the use of both anyway. The new version of that code is supposed to come into force next summer. Public comment on the update with the National Farm Animal Care Council opened Nov. 29 and ends Jan. 27, 2022.

On moving cattle with a front-end loader, Thurler explained that a hip clamp or hip lifter, temporarily affixed around a cow’s hindquarters, is only intended to raise a cow onto her feet. The setup is not to be used to drag the cow around on the loader if it’s shown she can’t stand. And there are circumstances where a lame cow can be carefully placed and secured in a front-end loader bucket for transport — but definitely not the pallet forks seen in the footage, he said.

On the removal of calves from their mothers, Thurler said that at his own farm he puts the calf inside a small, heated hutch in a corner of the calving pen. “The calf can’t get out, but the cow can still reach in. The mother can still go and lick the calf, and play with the calf for a few hours, and then we pull the cow out,” he said.

By contrast, workers in the video were trying to remove the calves much sooner after birth. “And if you try to do that, of course the cow’s not going to like it,” he said. It’s obviously unwarranted to toss around “a helpless little calf that’s just born.”

When it comes to putting a cow down, a dairy farmer must check the body, “tap her eye, make sure she’s dead, before you walk away,” he said.  Each dairy farm must have a written protocol on proper euthanization of cattle, under the terms of proAction.

Sixty per cent of Ontario dairy farms are inspected annually, and all are inspected at least once every second year to ensure compliance with the animal welfare, biosecurity and other standards in the program, Thurler said. ProAction’s third-party validators conduct those inspections.  In addition, Dairy Farmers of Ontario field services representatives can and do carry out spot checks to ensure the farm’s required “Grade A” status as well, he added.