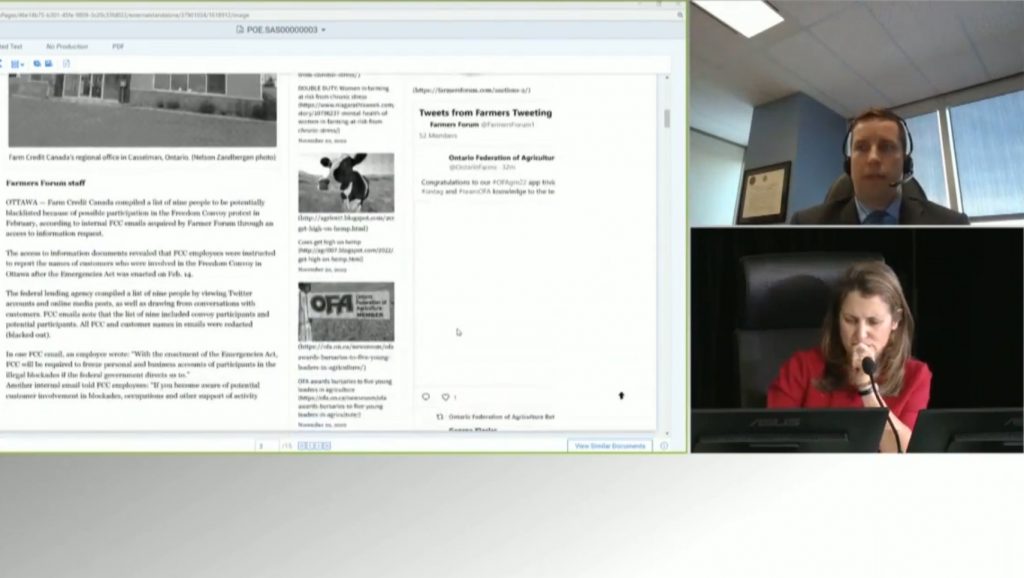 Deputy Prime Minister Chrystia Freeland looks at a Farmers Forum article while cross examined by a lawyer acting on behalf of the Province of Saskatchewan, Michael Morris, at the Emergencies Act Inquiry.

Under cross examination by Province of Saskatchewan counsel Michael Morris at the Public Order Emergency Commission, Freeland noted a “misunderstanding” about government direction in an internal FCC email published by Farmers Forum and acquired through a freedom of information request.

“The way the order worked … that was to be a communication between law enforcement and the financial institutions.”

The documents acquired by Farmers Forum indicate that FCC compiled a list of 9 names for potential black-listing because those individuals may have supported the Freedom Convoy.

Canadian banks froze a reported 257 accounts of convoy supporters after the invocation of the Emergencies Act on Feb. 14. FCC, a federal ag-lending institution, was also subject to the extraordinary measure. The federal government called off the state of emergency Feb. 23, following the forceful removal of protesters and trucks from downtown Ottawa.

Freeland appeared on the second-last scheduled day of the six-week inquiry into the government’s invocation of the Act.

See the exchange between Morris and Freeland in the clip below.