ELEVATORS FORCED TO TIE UP TOO MUCH CREDIT: Agricorp demands millions as security, some grain operators say 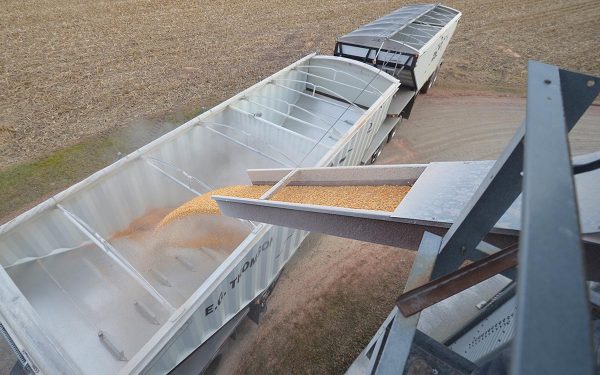 NORTH GOWER — Some unhappy Ontario elevator operators say that Agricorp is making it harder to renew their grain dealer licenses and is treating their operations as extra risky these days because of higher commodity prices.

They complain that Agricorp now requires many operators to post a separate letter of credit in millions of dollars as security with the provincial agency. That ties up money and reduces an elevator’s available operating credit, limiting the ability to buy and sell grain.

Such letters of credit won’t be tapped by Agricorp unless the business fails to pay farmers for their crops — a rare event in Ontario.

Industry sources told Farmers Forum that to be licensed Agricorp has been demanding a letter of credit worth up to 66% of the elevator’s highest month of grain purchases in the previous year — or an indication the business has other assets equivalent to that amount.

“When you have to come up with a letter of credit for $10- or $15-million, that takes $15 million out of your operating credit that you’re able to buy grain with, so there’s a big issue with elevators maintaining their licenses to operate in Ontario,” North Gower Grains owner Dwight Foster told Farmers Forum.

“We’ve got to buy the grain, and then they want us to have this slush fund sitting there, just so that we can say we have it.”

Operating without a license is not an option because farmers expect their local elevator to be licensed, according to an unnamed grain industry source. Farmers that sell to a licensed grain elevator are covered by Agricorp’s Grain Financial Protection Program, which reimburses producers in the event an elevator goes bust and fails to pay for a crop.

Kell could only speculate on why the decision-makers at the agency have been taking a harder line on license renewals. “I don’t know what they’re thinking, but from the cheap seats, it just looks like they’re being absurdly careful.”

Kevin Wilson of Wilson Farms Grain in Vankleek Hill emphasized that he supports the licensing regime but argued that Agricorp was effectively penalizing the industry “because it doesn’t understand the sophisticated market hedging techniques employed by the modern elevator.”

Operators rely on multi-million-dollar lines of credit to buy farmers’ crops and cover the margin calls that may arise after selling those crops on the futures market. While selling on the futures market locks in a floor price for the crop delivered on a future date, the elevator must pay the difference if the market value of that commodity rises above the pre-sold price, prior to delivery.

In an era of surging commodity prices, elevators have had to dig deeper into their existing lines of credit to cover their margins in the last couple of years. Agricorp wrongly views that temporary debt as a worrisome trend and red flag, Wilson said.

He explained that the agency fails to account for the corresponding rise in the cash asset value of that exact same, undelivered grain still sitting in the elevator’s possession during a margin call situation.

In the end, the elevators make the same profit but must handle larger sums of money to do it. Having to post a letter of credit only slows down potential growth in the industry, said Wilson, by reducing credit available for buying crops and using the futures market to mitigate risk. His own company increased its line of credit usage by 60% last year, he said.

He suggested the agency’s thinking is still informed by the 1980s, when elevators were simply trying to buy low and sell high, and when online trading didn’t exist and bankruptcies did occur.

Today’s context is different. “We’re in a high cash-usage business right now. Yields are up. Prices are up. And it takes a lot of capital to make it all run,” he said.

Not only are more expensive crops arriving at the elevator during harvest, it’s rolling in faster, thanks to improved field equipment and ample trucking firms in Eastern Ontario.  “These elevators have to cut cheques for the crops that come in before they get cheques in return,” he pointed out.

At the same time, while Agricorp protects the farmer who sells to an elevator, no such financial protection is offered to the elevator when it similarly sells grain to an end user, a “flaw” that rankles Wilson.

Wilson said he’s brought the matter up with Ag minister Lisa Thompson and has sat in on calls with Agricorp on the licensing issue. “Unfortunately, they have a policy framework they have to work within,” he said.