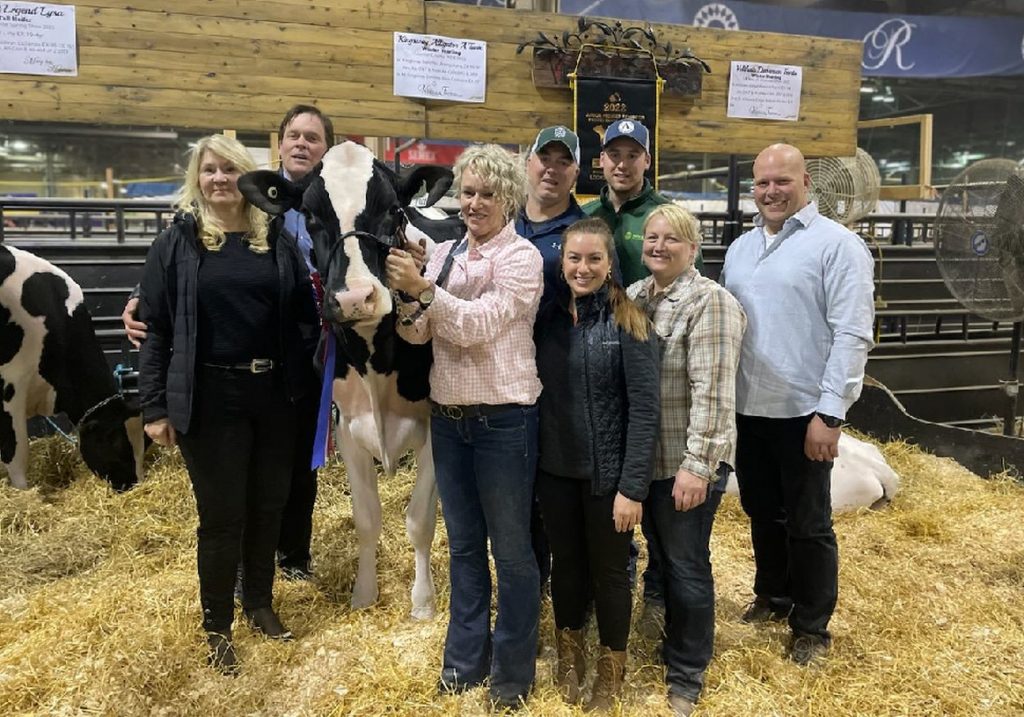 Third win at national level Holstein show in one year

OSGOODE — Kingsway Alligator A Twix continued her winning ways in Toronto, notching a triple-crown of sorts for her owner, Velthuis Farms, owned by Steven and Paul Velthuis of Osgoode.

When Twix was chosen Junior Champion at the Royal Winter Fair last month, it marked her third such win at a national level Holstein show in just over a year. It followed junior championships at Madison, Wisconsin’s World Dairy Expo in October 2022 and at Holstein Canada’s November 2021 national show in Saint-Hyacinthe, Quebec.

Velthuis says he’s already more than recouped that investment through the sale of 18 embryos — worth about $2,000 each — flushed earlier this year from the animal while still a heifer. They were exported to buyers in Japan, and the exposure gained through top placings in both Madison, Wisconsin and Toronto helped ensure top dollar for the embryos.

“She’s been pretty good to us. If I had 20 more embryos right now, they would all be sold,” he said.

Twix is set to give birth to her first actual calf in March.

“For her, showing as a heifer is over,” he said. “If she can calve out with a beautiful mammary system, the marketability is just going to be increased that much more because she’s so prolific.”

She’s become a “fan favourite” and features a “combination of dairy strength, excellent feet and legs, and wide, open ribs,” he said.

Velthuis said he’s one of only a handful of Canadian competitors to regularly send animals to both the Madison and Toronto shows, observing that both events are “pretty well on an equal footing” in terms of their prominence in the dairy world.

As it turns out, an American nemesis heifer that finished second to Twix south of the border also followed her to Toronto to place second again. A record 540 Holsteins competed at this year’s Toronto show, said Velthuis, who brought 7 Holsteins and 4 Jerseys to the event, the same complement as Madison

“People want to get out badly and they’re coming back to their interests and passions,” Velthuis said, remarking on the Royal’s return after a long pandemic pause. It was last held in 2019.

He describes his own passion for cows as “recreational” — though he does pursue cattle breeding, buying, showing, and genetics with an eye for coming out ahead of the considerable expenses. It’s not cheap sending a paid crew of five to show the farm’s cattle around the region, let alone Toronto or Madison.

Velthuis buys cattle that he believes will exceed expectations and generate value, a skill honed by 40 years experience as a dairy farmer. “You’ve got to be able to recognize an opportunity,” he said.

His latest score was Repa Drh a Shby Jennidream, a calf purchased a couple months ago at the Supreme show in Quebec. That animal went on to win the Fall heifer class at this year’s Royal. Velthuis Farms was also named Junior Exhibitor, based on the combined points of its young animals in the show.