CORNWALL — A procession of 45 farm tractors plus pickup trucks left the foot of Cornwall’s international bridge around 5:30 p.m. Saturday, Feb. 12 — after a full day of peaceful solidarity with the truckers’ Freedom Convoy in Ottawa.
The tractorcade took up positions along both lanes, narrowing traffic on the Seaway International Bridge to one lane — slowing traffic but not stopping it — throughout the day.

Cornwall Police directed traffic while additional flag-bearing supporters parked nearby. Many motorists enthusiastically blew their horns while slowly rolling through.

Organizers said their action had been hurriedly planned just hours earlier. Many had been in downtown Ottawa with the truckers on the previous weekend, but they opted to focus on a local border crossing as a third weekend of protests unfolded.

“I think it’s slowly growing to every border,” observed Thomas, a farmer from St. Isidore who didn’t want his surname used. “You know, it’s not just us that think the same way. We don’t want these mandates.”

He added that while other countries have lifted vaccine mandates there’s “a lot of mistrust (of governments in Canada). At some point, you just don’t trust anymore.”
Another Eastern Ontario farmer fretted that his young son would be compelled to wear a mask when he starts school several months from now, in September. “Kids don’t understand that. We’re over 90 % vaccinated. It’s time to move on.” 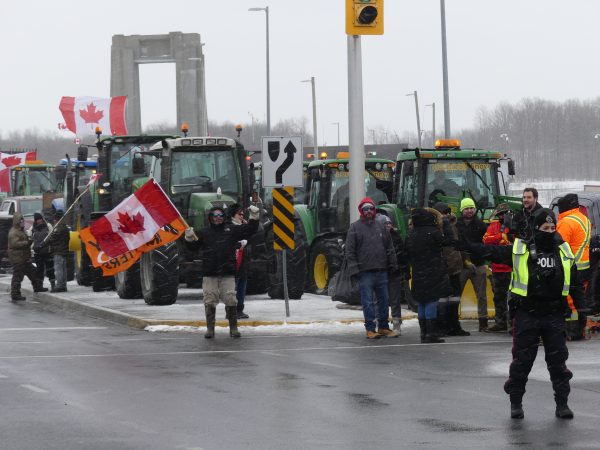 Martin Renaud of Green Valley, said that the event garnered “very positive” support. “There was so much pizza we could have fed 500 people. People were dropping by with donuts, coffee and bottles of water,” said the cash-cropper, who organized the tractor parade to Ottawa one week earlier.

In light of the Trudeau government’s triggering of the Emergencies Act, Renaud said his next move would be to “stay home.” He didn’t want the headache of police coming around without a warrant to search his property.

Renaud joined the Freedom Convoy with 200 tractors and other vehicles a week earlier. His own tractor parked near the Chateau Laurier Hotel, just off Wellington Street, in Ottawa. He said there was no pushback from residents and he was amazed at how festive it was and how many people were downtown supporting the protest. “People are dancing and smiling,” he said. “Even the cops. The cops said this is the easiest job I ever had.”