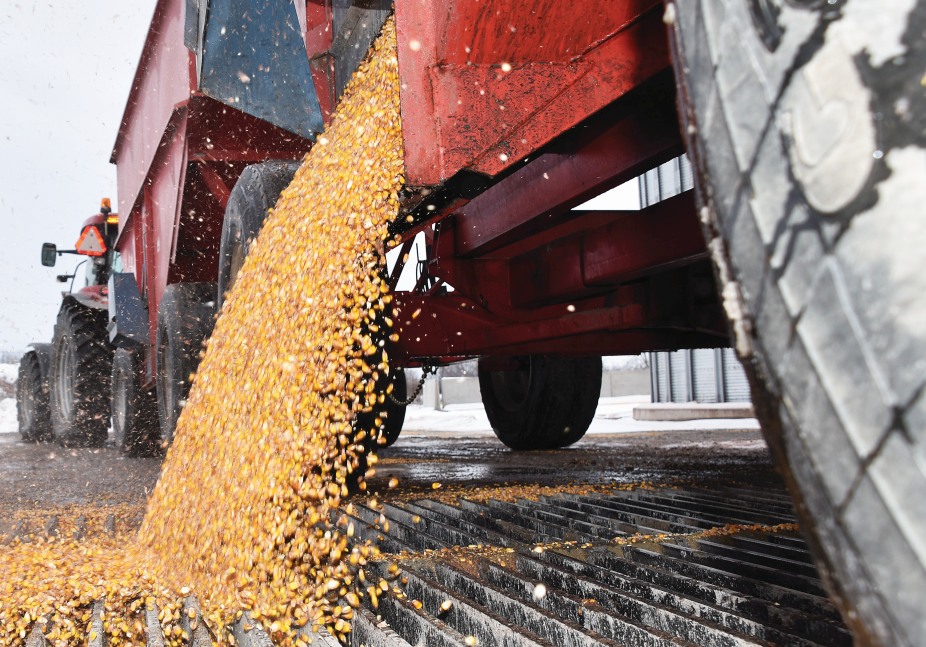 Eastern Ontario had a better than expected corn harvest in a year of solid prices. Corn empties into Rutters Elevators.

Eastern Ontario, east of Brighton, received average rainfall during the 2022 growing season — a fact that undoubtedly contributed to what seems to be an above-average corn yield. It might have seemed even more abundant at harvest, however, because it came off the field so quickly. This led to some temporary bottlenecks and backups at elevators and ports that were already down in capacity somewhat because of a larger than expected winter wheat harvest earlier in the year.

Brinston dairy farmer John Westervelt reported a new yield record at his farm — 219 bu/ac — on one 20-acre field. Overall yield on the farm’s 125-acres of grain corn was otherwise similar to last year’s bin buster, he said. His average yield this year was 162.8 bu/ac. Test weight was also very good.

Westervelt also observed that 2022 was not the year to gamble and delay the planting of full-season corn as the season wasn’t “too forgiving” on the small amount he seeded later in the spring as an “afterthought.” This was a year that “rewarded the traditional approach to growing corn,” Westervelt concluded.

Osgoode dairy farmer Steven Velthuis said that corn test plots at his farm yielded between 200 and 250 bu/ac. “We’ve got a lot coming off in that 220 to 240 bu/ac range,” added Velthuis, estimating at least half the farm’s 700 corn acres were in the bin by Nov. 10.

Corn planted by May 1st was coming off at less than 20% moisture, and Velthuis marvelled at the dry and mild harvest conditions. “I honestly haven’t seen anything like this in my life,” the 57-year-old observed. “The ground is so dry … It’s absolutely fantastic. We can take our big wagons out there and we’re not wrecking the fields.”

With about 75% of his 450-corn acres harvested, Williamstown cash-cropper and customer operator Martin Lang anticipated his “second-best yield ever” at an estimated 200 bu/ac overall. Only 2021 was better. The 2022  yield, of course, varied  by location on the farm.  “I have had fields average 230 bu/ac, I’ve had fields average just under 200 bu/ac,” Lang said.

So efficient was this year’s corn-drying process — thanks to warmer ambient temperatures and dryer kernels — “it’s difficult to get the corn through the dryer fast enough,” Lang said.

Glenn Barkey, a dairy and crop farmer in Blackstock, had yet to begin his grain-corn harvest when he spoke with Farmers Forum Nov. 10. But based on his corn silage crop and the appearance of his grain-corn stand, he expected a good crop.

“It’s easy to be patient when the weather’s this good,” Barkey said.

The corn grew well despite very dry conditions in his area last summer, he said. “It handled it a lot better than the beans did. The beans were disappointing, but the wheat was good and the corn looks good, so I guess it’s keeping the universe in balance.”

Quinte West cash-cropper Jeff Harrison said his yields were “maybe average or a little better than average” in his area that “went a good six weeks with no rain.”