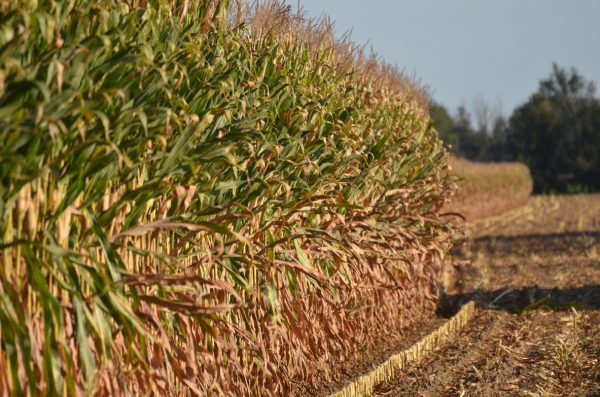 GREEN VALLEY — If the first 60 acres through the combine hints at what’s to come, Martin Renaud may be in for a bin buster.

“I was in the combine with a big grin on my face. I think it’ll be the best crop I’ve ever had,” said the Green Valley crop farmer, who averaged nearly 200 bushels per acre.

Planted in perfect conditions with nearly 100 per cent emergence in just seven days, the corn was six feet tall by July 1. It had just the right amount of heat and rain, especially with five-millimetre night-time sprinklings in late August.

“It’s basically like growing hydroponically,” said Renaud, adding that genetics only go so far. “It’s like having a car with a big engine in it. If you don’t have gas to put in the tank, you’re not going to win the race. This year we had a perfect engine and a full tank.”

Jumping at the chance to market new crop corn at old crop prices for a $50-per-tonne premium, he wondered if he was pushing it on Sept. 25 — his earliest-ever start — but moisture dried down three per cent in just two days.

It’s early, but fusarium damage seems minimal and test weight won’t likely be an issue, said Gilles Quesnel, an independent agronomist based in Winchester. All signs point to an above-average crop, but Quesnel doubted Eastern Ontario yields will break records.

But Great Lakes Grain, a marketing partnership between GROWMARK, Inc. and AGRIS Co-operative Ltd., is predicting an Ontario bin buster of 173.3 bu/ac after a 10-day crop tour of Western Ontario fields. The previous provincial record of 164 bu/ac was set in 2010.

It was still officially summer when Chesterville crop farmer Marty Derks started harvesting corn on Sept. 22. With early planting, even germination, and warm nights, his first 70 acres yielded close to 200 bu/ac and there may be better yet. “It’s probably not our best-looking field by far.”

“The cobs are filled right to the end and kernels are swelled to the point of curling around the bottom. We have tremendous potential,” said Dick, of Barclay Dick & Son Farm Supply.

The crop had near-perfect conditions and there was still no frost in sight on Sept. 29. “This year Mother Nature did her part,” said Dick.