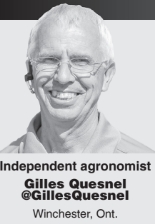 • Yields expected to be above average.

• Maturity about 1 week behind normal.

• Start of the harvest season delayed by rain.

• Ideal time to sample for SCN is after soybean harvest and before soil freezes.

• Given the large store of forage inventory this year, many growers planned to leave their 4th and/or 5th cut on the field.

• Best to rotate older stands out of alfalfa, due to higher risk of winterkill.

• The optimum seeding date for our area falls in the last 2 weeks of September. If seeding after optimum date, increase seeding rate by 200,000 seeds/acre for each week delay, to a maximum of 2.2 million seeds/acre. 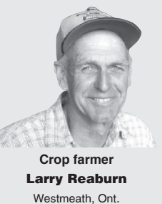 • Crop uneven in height, cob, size and maturity by Sept. 28.

• In most fields, husks were drying on a green stalk with maturity ranging from 3/4 milk line to brown layer.

• Some corn silage was off but delayed by wet field conditions and frequent showers.

• Most of the soybean crop reached maturity.

• Most farms took off more than adequate amounts of hay this year.

• First-planted winter wheat had a good start with lots of moisture. 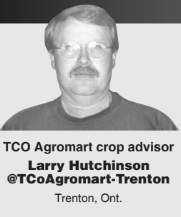 • Crop reached fully dented stage by Sept. 28, with black layer stage and harvest yet to come.

• Dry weather earlier in the season may affect yield.

• Spider mite damage evident in some small pockets within fields.

• Hay and alfalfa fields were in the resting phase and getting fertilizer top-dressing.

• The corn silage crop was 75% taken off and looked decent.

• Less than half of the winter wheat appeared to be planted by Sept. 29 but still plenty of time.

• Delayed soybean harvest was delaying the planting of winter wheat.

• Winter wheat that made it into the ground early was showing great emergence.

• By Sept. 28: Grain corn  anywhere from ¾ milk line to starting to brown layer.

• Soybeans yields are running about 10% less than average, but still better than expectations.

• Yields are area-related but across the board about 10% below average.
Most soybeans are a week to 10 days later than normal, including the early beans.

• Hay and pasture fields have had excellent regrowth for going into dormancy.

• Some fall wheat and winter barley have been planted.