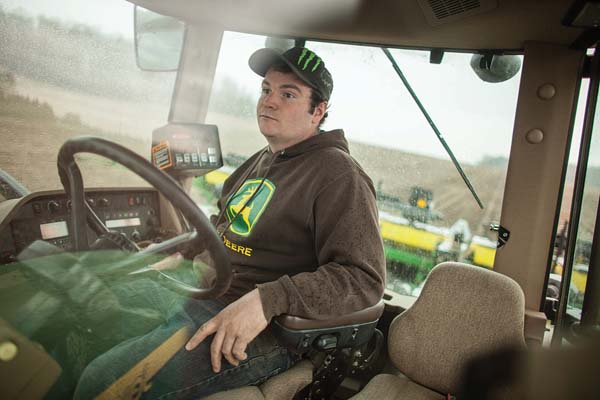 ARVA — With only about two hours and 25 acres to go, corn planting ground to a temporary halt for Luke McClary with a small cloudburst on May 5.

“Last year we didn’t start until Mother’s Day, so we’re in pretty good shape. If the heat continues, I imagine it’ll start to poke through fairly soon,” said the Arva crop farmer, who farms north of London.

Down the road, Ilderton crop and chicken farmer Rob Foster was set to start soybeans.

“Two or three weeks ago, it looked like things were going to be pushed back but once the weather turned, everything came fast. We went full bore around here,” he said.

Western Ontario was ahead of schedule, with an estimated 60 to 70 per cent of corn and as much as 10 per cent of soybeans in the ground by May 5, said David Hooker, a research agronomist at the Ridgetown campus of the University of Guelph.

On average, corn planting hits the 90 per cent mark around May 23, but with sunshine in the forecast, farmers were on track to be there before Mother’s Day — the second-earliest in 14 years, next to 2010, said Hooker, chalking it up to an abnormally dry April, larger equipment speeding up the pace, and farmers spurred on by the memory of wet May weather in years past.

Corn planting was already closing in on 90 per cent in Mark Brock’s neck of the woods. Planting with no rainclouds in sight was a welcome change, said the Staffa crop and sheep farmer.

“It’s been a joy to be doing farm work under nice conditions.”

Near Bayfield, crop farmer James Armstrong was in the field earlier than his long-term average and planting the tail end of corn into better soil conditions than he’s ever seen at this time of year. “It’s absolutely beautiful. We’re planting right into moisture.”

While Mark Huston didn’t hit the field near Thamesville until May 1, he closed the book on corn planting in four days. The ground was mellow and not too wet or too dry, said Huston.

Early wrap-up is good sign, but you can’t bank on anything, he said. “Planting is like building a foundation on a house. If you start out with a poor one, a lot of really good things have to happen to balance it out. We’re starting with a pretty good foundation.”