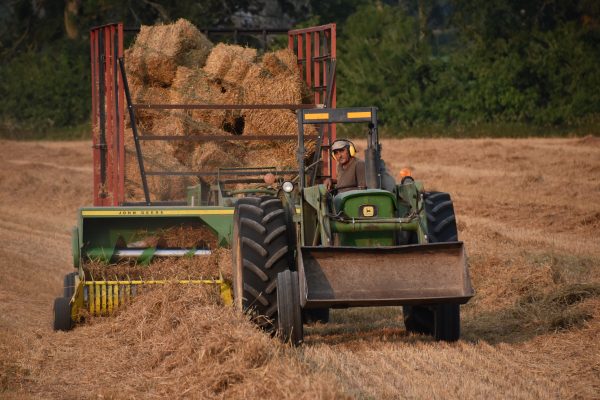 Almost entirely off the field by the third week of August, Eastern Ontario’s wheat harvest looked good overall.
Eastern Ontario Crop Consultant Gilles Quesnel says the winter wheat harvest was finished about a week and a half earlier than usual and yielded respectably, despite dry conditions early in the season.

The crop over-wintered exceptionally well, leading to great stands, though this was mitigated by lack of moisture, leading to somewhat shorter plants.

Spring wheat yielded slightly above average, he says, “which was surprising because the crop tillered a lot” in the cooler conditions earlier in the season.

Wheat quality was good this year, Quesnel says, and fusarium was not a problem. However, the harvest was delayed because of rain, and consequently the falling number — one gauge of quality that measures the seconds taken for a specialized plunger to fall through a wheat slurry — tended to be lower.

Kevin Wilson of Wilson Elevators reported Aug. 16 an “extremely variable” falling number in the wheat arriving at his Vankleek Hill operation. The lower the falling number, the higher the amount of unwanted sprouting in the harvested kernels: a figure of 350 is the benchmark minimum usually associated with number one grade wheat.

“We’ve seen falling numbers anywhere from as high as 350 down to 160,” says Wilson. “For the most part, I would say we’re seeing some very high protein levels and some average to below-average falling numbers.”

“It’s going to be a challenging marketing season, if the farmers don’t know the quality they have in their bins,” said Wilson. He estimated about 80% of the Eastern Ontario harvest had come off his customers’ fields (by Aug. 16), with about 30 % more wheat acres planted in 2021 over the average season. “They have to make sure they’ve got a handle on what they’ve got quality wise, and make sure they’re selling it to the correct market so there’s no surprises when it comes out of the bin,” he added.

But as with all crop commodities, wheat prices have been strong, he noted, reporting his clientele have locked in contracts ranging from $300 to $450 per tonne.

Demand for straw always ensures a minimum planting of small grains in Eastern Ontario each year, and dairy farmer Hans Scheuner was out baling probably one of the last wheat fields harvested (a couple of days earlier) in the region. The 23-acre crop yielded “pretty well,” remarked Scheuner on Aug. 20, briefly pausing his bale-thrower setup by the side of the road near Russell. 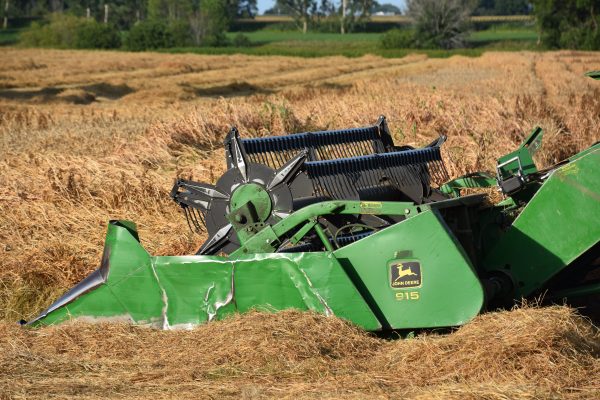 A paused combine at the same Russell-area during the actual harvest of the wheat, a couple of days earlier. (Nelson Zandbergen photo)