DRONE FEVER: 80 % of drones in next 10 years will support agriculture 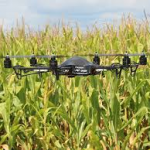 Most have seen at least one drone this summer. They are everywhere. In fact, there have been many reported drone-related incidents, which are cause for concern. Despite this, some suggest drones are expected to change how we produce and grow food globally.

Up to now, the build-up to the everyday use of drones hasn’t had a significant impact on agriculture, at least, not yet. Experts believed for a long time that commercial use of drones would be deemed dangerous, hazardous and difficult to properly regulate. But this year, the winds of change seem to have shift in drones’ favour. Previously, commercial use was on a very small scale for movie making, real estate showcasing, and, of course, agriculture. In an unprecedented move, the U.S. Federal Aviation Administration recently approved an entire fleet of 324 drones for commercial use, operated by one private partnership that includes companies like IBM, Boeing, the American Red Cross and the American Farm Bureau. This is a group of highly influential and capable organizations, looking to develop business in search and rescue efforts and, yes, agriculture. The regulatory space surrounding drones seems to be loosening. Once regulators have figured out a way to make these unmanned aerial devices safer for the broader public, it is just a question of time before drones become an integral part of sound farm management practices.

Data access for farmers would be greatly enhanced. Drones can aid in monitoring crop health, insect problems and water irrigation issues, anything that needs to be assessed and helps increase yields. As for livestock, drones can be effective for monitoring cattle and security. Drones are already astonishingly affordable for commercial use. Some can be purchased for $700, while higher quality models can be fetched for $20,000 to $30,000. Most are equipped with infrared cameras, sensors and other technology controlled by someone on the ground. The technology is advancing at a very fast rate so current limitations, such as range and cargo capacity, will only improve.

A group representing robotics and drone manufacturers recently published a report stating 80 per cent of all drones over the next decade or so will likely be used to support agriculture, in one way or another. Financially, and geographically, the business case to support the proper use of drones in agriculture is robust. For one thing, time and energy costs are significantly reduced. Farmers are not required to physically go into the field and damage crops in the process. Also, surveillance can be achieved below the clouds. Therefore, drones have an upper hand over satellite imaging, which, at times, can be obstructed by storm systems. Drones can also better support the research many plant scientists conduct on a regulator basis, making samples easier to collect. But the group’s most important argument is that remotely located farming operations are convenient for drone usage, when considering public safety. Privacy can also be a significant issue.

Drones are making a name for themselves for enabling agriculture to become more efficient and precise. But it does not stop there when it comes to food. Amazon, the online retailer, is currently on a mission to make grocery delivery possible by drones at some point. This summer, the Seattle-based company presented a regulatory framework which would accommodate localised, low-speed delivery at 61 meters or lower. That space would exclude airports and other areas susceptible to higher air traffic and obstacles. During its pitch, Amazon argued that the uptake of drones means that regulation will need to change to adapt, without generating costs for commercial users. It even presented an audacious roadmap to allow computers to look after air traffic generated by drones. Flying drones would immediately adjust their path should they encounter another flying object, or even wildlife. It is still unclear when regulators would respond or even act on Amazon’s vision for home delivery in the modern world. But with better and more reliable technology, anything is possible.

It may take a while before drones deliver pizzas or groceries to your doorstep, but the technology is making some inroads within the food chain. Ironically, it is indeed interesting that many farmers, often described as being traditionalists and technophobes, are now using a technology that highly sophisticated enterprises like Amazon cannot use, at least not yet. This is a clear indication that the era of big data in farming is upon us.

Dr. Sylvain Charlebois is a professor with the Food Institute at the University of Guelph