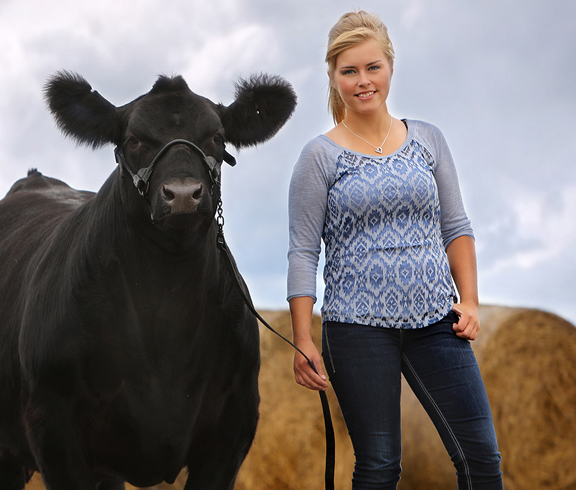 TORONTO — It took hours of primping and kilometre-long walks with her steer all summer long to bring Sylvia Megens to the edge of a Toronto show ring surrounded by jam-packed stands. And it was all over in a flash.

“It was just a blur. Everything was happening at once. Everything you worked for comes down to that few moments in the ring,” says the 22-year-old from Goodwood, near Uxbridge, who still has a few jitters despite being a veteran competitor at the Royal Agricultural Winter Fair.

Her steer, Last Chance, was right on the money as top market animal in the Nov. 6 Queen’s Guineas competition.

“It’s taken 11 years to find one that’s done that for me. It shows that hard work and sticking to what you love will pay off eventually.”

She hardly caught her breath before being ushered back into the ring for showmanship. “I had just won the Queen’s Guineas and I was bawling my eyes out. I was like, ‘You want me to go in right now?’” says Megens, who then earned grand champion showperson honours, topping both categories. “It was a dream come true. The best of the best go to the Royal.”

At auction later that afternoon, 1,330 lb. Chance sold for more than $13,000 to Highland Packers Limited of North York.

“I thought I was holding it together until I glanced ringside and my sisters were crying their eyes out. It’s the end of an era. It’s changed my life and made me who I am today,” says Megens, who is a research associate with DLF Pickseed but also raises purebred Angus and Simmental cattle at Megens Cattle Company with her older sisters, Patricia Taber and Jennifer Smith.

Hailie Conley was also a little blurry-eyed when she looked at her crew after her heifer was slapped as grand champion in the National Junior Beef Heifer Show.

“It took me a few minutes to realize just what I’d accomplished. I didn’t have any words. I was just smiling from ear to ear,” says the 16-year-old from Plainfield, north of Belleville.
But she had to fend off criticisms about H Princess 4267 ET, her May 2014 heifer — common stateside but a rarity at Canadian shows.

“People said she was too tall and too green, but I had a gut feeling,” says Conley. She also nabbed reserve champion showperson honours. Once in the ring, she channels her nerves into razor-sharp focus.

“Every time I show, I just lay it on the line like it’s my last time. The judge said he could see the passion in my eyes and he could tell I wanted it,” she says. “I have drive and passion for this industry. That’s a win in my mind.”