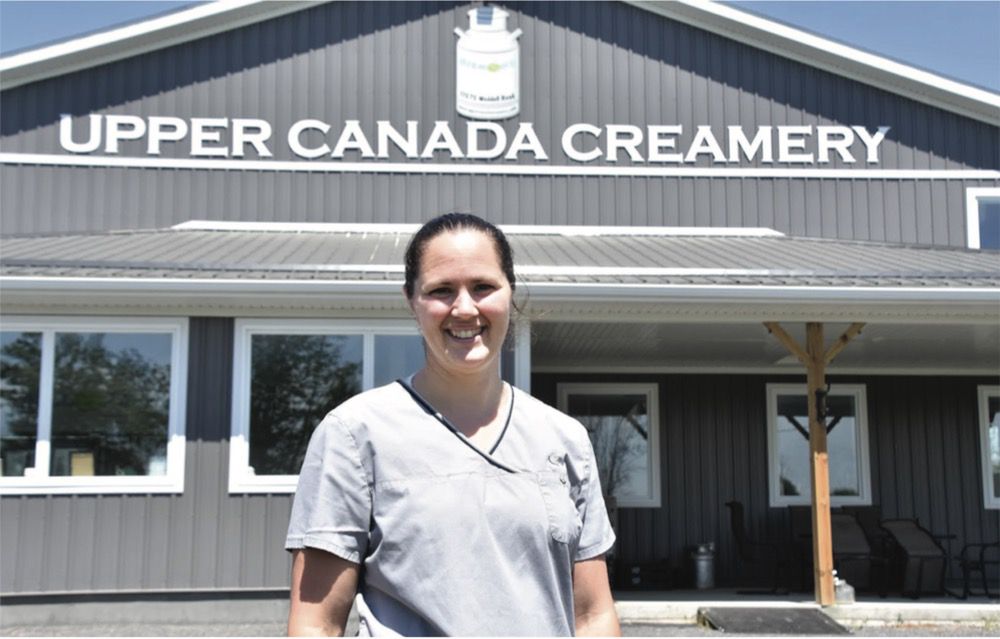 IROQUOIS — Here’s the scoop: Ice cream is the latest treat to flow out of the Biemond family’s on-farm dairy plant in the Municipality of South Dundas, though you’ll have to visit the operation on Waddell Road to pick up a container.

But their mainstays — yogurt, Gouda cheese, curd and fluid milk — can be found at over 100 stores around the region, nearly six years after the $1.5-million plant began processing milk from Josh Biemond and wife Ellen’s grass-fed, organic dairy. The store numbers climb to 150 if counting the off-label containers filled for other companies. “My product is in their packages,” explains 39-year-old Ellen Biemond.

One of only 15 farm-based dairy processors in the province, the 8,200-sq. ft. Upper Canada Creamery is unique in having multiple product licences for processing.

The unofficial debut of Biemond ice cream last summer — sold exclusively by the scoop at the farmgate canteen inside the processing plant — coincided with pandemic-related circumstances that marked a turning point for the business. “We increased our traffic flow by 300 % last summer,” she says.
With the heightened interest in local food and local shopping, the pandemic “was that final push we needed,” she remarks. “It was what we needed and at the right time. It’s finally pencilling out.”

Ellen currently makes her ice cream in smaller quantities in the “kitchen” upstairs at the on-farm plant next to the dairy barn. She began stockpiling batches in February this year, she says, and has enough now to sell by the container (instead of just the scoop) — but not enough to offer it through third-party retailers.

Adding a full-out ice cream line to the production area would mean another $100,000 investment, so Ellen is content to stick with the current strategy for now.

As with their other lines, Biemond ice cream “is actual real ingredients. No fillers, preservatives,” she says.

And this ice cream screams ‘local.’ The strawberry version is made with strawberries from Dentz Orchards & Berry Farm a few kilometres away. Fresh eggs — a traditional ice cream component typically not used by the mainstream makers anymore — comes from the Beking egg farm in Spencerville.
The vanilla version contains only milk, cream, egg, sugar — and vanilla.

They process 1,000 litres of milk each day from their herd of hybrid dairy cows — about 365,000 litres annually. The milk goes through the regular Dairy Farmers of Ontario transportation process. That means an 18-wheeler milk truck picks up at the barn and drives about 50 metres across the yard to pump out at the plant. They didn’t install their own pipeline to the plant as they must pay the truck transportation fee whether they need it or not.

The Biemonds own 37 kg of milk production quota. During the summer, their plant typically absorbs 100 percent of their own milk, thanks in part to a deal with the local historical museum Upper Canada Village. Under that arrangement, the Biemonds supply the local tourist attraction with bulk pasteurized milk used in the production of cheese.
She says that she and two full-time employees are busy every day at the plant. A regular production run — involving cheese, yogurt and fluid milk — occurs every Wednesday. Josh assists with running the line after milking the cows in the morning. (He was on his way out the door to cut hay when Farmers Forum arrived for this interview).

Ellen also says she and her employees work two days per week making ice cream. On top of that, she spends another whole day cutting and packing cheese. Other full days are spent at the retail counter and in the offce. The family takes Sundays off, except for the usual chores of milking the cattle.

Asked if she has advice for dairy producers interested in becoming processors, Ellen replies: “Know what you’re getting into and do your research because it is a commitment. But the pride of producing good food and having your name on it, feels good.”