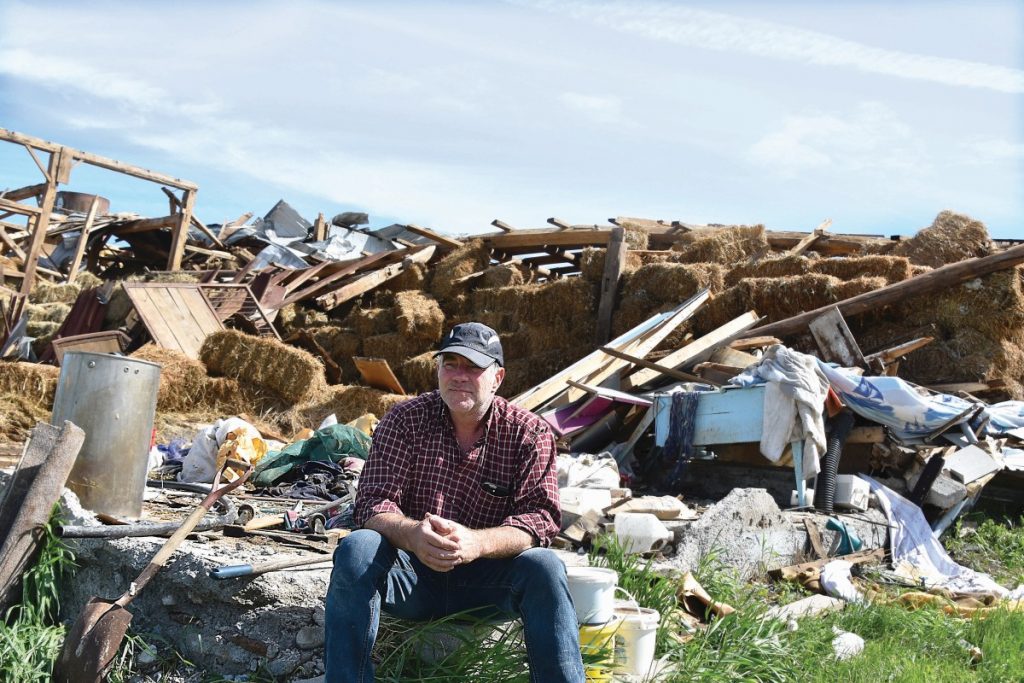 NAVAN — “The power of the press,” said respected fifth-generation farmer Wyatt McWilliams, explaining why he and many overworked neighbours talked to a journalist about the ongoing disaster for Navan-area farmers hit by last spring’s derecho. The windstorm that slammed the eastern Ottawa region in May is old news but farmers near Navan, Sarsfield and Carlsbad Springs are still immersed in repair and facing despair this winter.

A dozen farms had similar stories. In three terrifying minutes much of what they had built and maintained for years was catastrophically damaged.

As Wyatt walked out to greet me he received a call. His face remained stoic as he learned he and other affected farmers were not eligible for provincial disaster recovery assistance funding.

We then toured the farms where the comment most often heard was, “We were abandoned by our government.”

The provincial government’s website states that Disaster Relief Assistance for Ontarians “is a program that can help you recover costs after a sudden, unexpected natural event, such as a flood or tornado that causes costly and widespread damage in your area. This application form is for eligible small businesses, farms and not-for-profit organizations that have been impacted by a natural disaster and are located within the defined geographical area where the program has been activated.”

There is nothing saying how activation areas are determined, or anything about disqualifying certain municipalities. Without a formal reply, local farmers here wonder if being officially part of the city of Ottawa offers a partial explanation.

The city of Ottawa asked the province for disaster relief funding but has not received a reply by Jan. 1. Meantime, area farmers have to deal with their insurance companies and the challenges are piling up. Noted MPP Stephane Sarrazin (PC-Glengarry-Prescott-Russell): “I think that insurance companies are overwhelmed by the circumstances and that building materials and construction workers are hard to find due to the labour shortage.”

Major damage to structures which are essential to the farm’s operation was followed by what farmers say was slow movement from insurers and restoration companies. “We have to pay premiums on time,” says Chris Nooyen, a partner in Brabantdale Farms with estimated losses of “multiple millions” and insurance costs of “tens of thousands” annually. He received an offer two days before Christmas. “It’s an unreasonable and unacceptable timeframe.”

All the farmers interviewed said insurers sent residential builders to assess silos, sheds and barns, but Nooyen found experienced barn builders’ quotes were twice as high. He estimates insurance is offering about 10 cents on the dollar. Like many farmers interviewed he is considering dropping insurance. “Don’t tell us when we signed policies and paid premiums it’s worth a certain amount, then on the day of claim it’s not worth that.”

Many structures, such as Dave Spence’s old barn, are irreplaceable. “You couldn’t replace that for a million dollars,” he said. Even his hay shed had quotes of $93,000 and $168,000. Spence normally produces 3,500 small bales, but this year did about 600 because that’s what he has storage for, with the rest round bales.

At Morrisbel Farms, a silo collapsed on their barn. By the time they dealt with insurance procedures potential repair companies were already booked. “Like it’s crazy,” Denis Morris said. “We’re very well insured. The insurer allocates projects to third-party companies, but the third party companies build homes, not farms. None of the farm contractors that we normally deal with really want to deal with insurance, so they say get a cash payout, use the cash to hire us.”

Chris McWilliams received an insurance payout in late fall and ordered building supplies for next spring but it will be a much smaller structure. Insurance payouts can trigger another issue. When Dave Spence was offered a payout he checked with his accountant who said receiving it in 2022 could cause tax consequences as funds won’t be spent until 2023.

Others have partially succeeded in repairs or have made temporary repairs which will have to be redone next year. “Doing the same work twice,” said Wyatt. “But it could have been worse. We didn’t go to any funerals.”