Denys Farms of Parkhill wins Conservationist of the Year Award 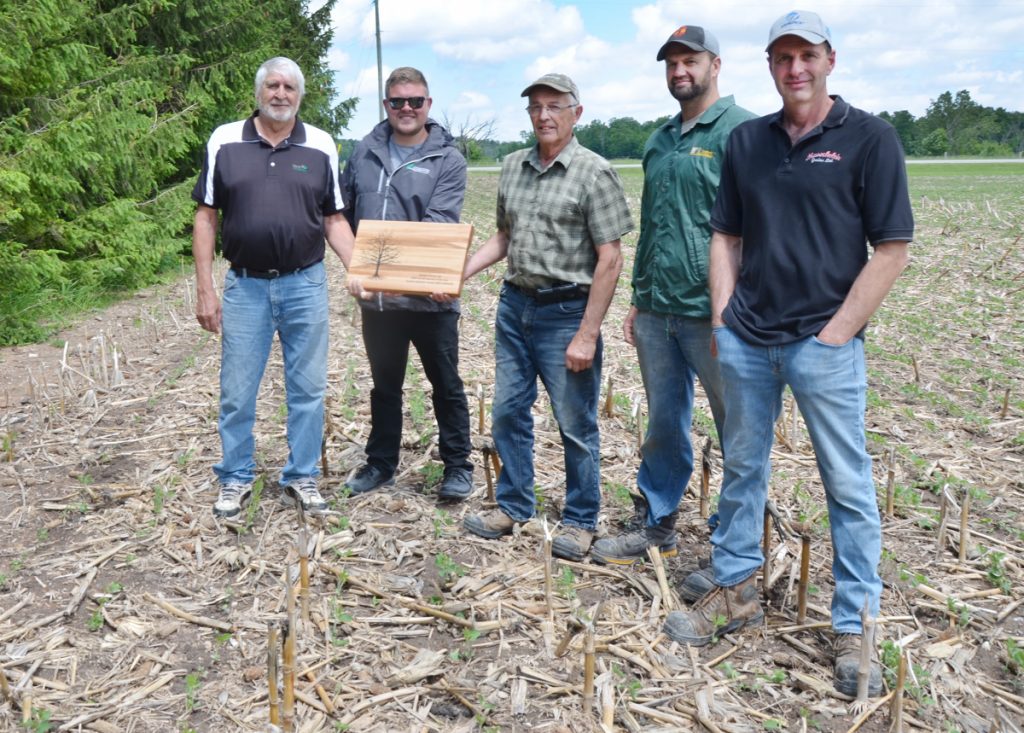 Presenting the award on June 9, from left to right, on behalf of Ausable Bayfield Conservation Authority (ABCA) are Adrian Cornelissen, Municipality of North Middlesex representative on the ABCA Board of Directors; and Nathan Schoelier, ABCA Stewardship Manager. Accepting the award, at the farm north of Parkhill, are: Dan, Mike, and Jim Denys.

PARKHILL — Ausable Bayfield Conservation has bestowed its 2022 Conservationist of the Year award on Denys Farms Inc. and operators Jim, Dan and Mike Denys.

The Middlesex County family has been an early adopter of practices that sustain and improve soils in their pork and cash-crop operation while also limiting erosion and managing runoff, as cited by the local conservation authority in a press release announcing the honour.

“The Denys family has practised best practices and land stewardship for decades, helping to build soil health and to manage and reduce runoff to the benefit of their farming operation and their community,” said Dave Jewitt, Chair of the Ausable Bayfield Conservation Authority (ABCA) Board of Directors.

Jim Denys, president of the farm business, says the family is honoured to receive the award. “Our goal is to build the soil and build the business and we believe it’s possible to do both,” he said. “We use a number of best practices to reduce erosion of topsoil and to reduce nutrient loss while also achieving high yields.”

Jim Denys was a recipient of the Ontario Soil and Crop Improvement Association’s 2019 Soil Champions Award.

Denys Farms runs a three-crop rotation including corn, soybeans and wheat, using no-till techniques for more than 25 years in the Parkhill area. The Denys family first planted no-till wheat in the 1990s as a way to conserve soil and stop erosion.

They also employ strip-tilling and multiple-species cover crops to build soil structure and organic matter. They spread manure onto a cover crop in August to encourage biomass production and limit runoff. Adhering to the four “R’s” of stewardship, they apply fertilizer at variable rates and only when needed by the crops.

The recipients received their award at a June 9 ceremony at their farm — a locally handcrafted, engraved dual-purpose board, made of Maple wood, that is a piece of art on one side and a serving tray on the other.

In addition to the prize, Ausable Bayfield Conservation is donating towards a tree and plaque at a Commemorative Woods. The organization has conferred the award annually since 1984.