Dairy Farmers of Ontario not surprised by Trans-Pacific trade concessions 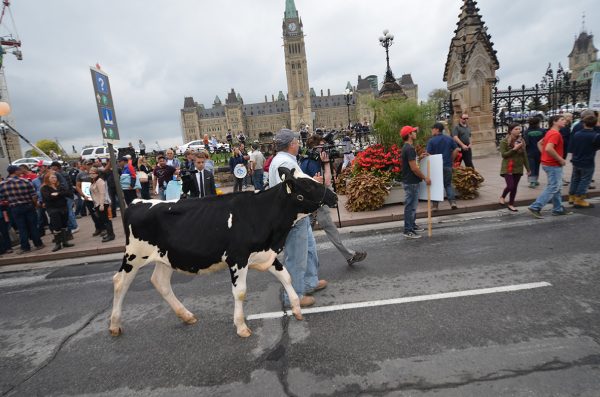 By Brandy Harrison and Patrick Meagher

MISSISSAUGA — Dairy import concessions in the newly-minted Trans-Pacific Partnership (TPP) trade deal didn’t catch the Dairy Farmers of Ontario (DFO) off guard — the writing was on the wall with the European Union trade deal two years ago.

The TPP deal will allow duty-free access of the equivalent to 3.25 per cent of Canadian production and DFO suggests that’s a best-case scenario.

“CETA (the Comprehensive Economic and Trade Agreement) showed this government would give up access to satisfy a deal,” said Graham Lloyd, DFO director of communications. “In the context of pressure on the government from New Zealand and the United States who wanted significant access including 10 to 15 per cent, 3.25 per cent is not as harmful.”

The trade deal, which includes 12 Pacific Rim nations amounting to nearly 40 per cent of the global economy, was unveiled on Oct. 5 after furious negotiations in Atlanta.

To keep its place at the table, Canada allowed duty-free dairy and poultry imports that will be phased in over five years. The concessions equivalent to 2016 Canadian production are pegged at 3.25 per cent for dairy, 2.3 per cent for eggs, 2.1 per cent for chicken, 2 per cent for turkey, and 1.5 per cent for broiler hatching eggs.

Current duty-free imports allowed under CETA, mandated by the World Trade Organization, and including milk protein isolates amount to six to 10 per cent, said Lloyd.

That 3.25 per cent is about 250 million litres of displaced milk, said DFO in a press release, adding “while DFO clearly advocated for no additional access for any foreign dairy, it respects that the additional access was a favourable outcome in the circumstances.”

“We don’t like to see any of our market share lost. We respect the government was under significant pressure to give more access but that respect should not be confused with acceptance or satisfaction,” he said. He later noted in a CTV interview that “the government did a good job effectively defending (dairy farmers)” from foreign threats.

The federal government will also offer farmers $4.3 billion in compensation over the next 15 years in income and quota guarantees and marketing programs, which translates to about $165,000 for a typical dairy farmer, according to Agriculture and Agri-Food Canada.

There aren’t enough details yet but farmers typically don’t want a government payout, said Lloyd. “They want to derive their income and revenue from the marketplace.”

But the closure of the duty deferral program also softens the blow, he said.

The program, intended to allow Canadian companies to use U.S. products with longer-term export requirements, resulted in U.S. milk being used in the domestic market. It essentially duplicated the import for re-export program with less strict controls and the DFO wanted it closed.

“We called it a leaky border and it was one of the areas we knew we were losing market,” said Lloyd, adding that he’s not sure that supply management will face more pressure in future trade deals, given the international landscape. “It appears there are no threats on the short-term horizon.”

Like all deals the devil is in the details. This makes it impossible to pronounce for or against the TPP, says Michael Byers, who holds the Canada research chair in global politics and international law at the University of British Columbia. “It can take weeks of analysis of a full and final text to determine the precise concessions and gains made and achieved by individual countries.”