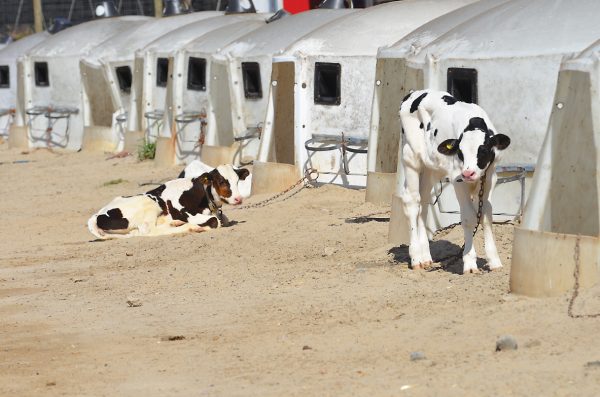 On Aug, 27, I was called to advise on a problem with calf health on a larger dairy farm. The farm generally has had good health in the replacements. They start calves in individual pens for the first week on whole milk then transfer them to outdoor hutches. They feed whole milk and starter in the hutches for about six weeks, then wean into groups of 4-6 calves.

This summer, they have had more pneumonia and diarrhea than normal. It got really bad in August. They treat aggressively with fluids and injectable antibiotics and get most calves to do okay. In August, they freshened just about twice as many cows as they usually do to try to take advantage of fall incentives. Combined with the usual rush to harvest the forages, the extra freshenings seem to have put quite a bit of strain on everyone on the farm.

I spent about four hours on the farm collecting the history and trying to sort out what might be going on. The visit turned up a few points that are common in unusual health situations.

First, the farm assumed that they were dealing with the same sort of problem that had happened previously. Pneumonia and diarrhea are common in calves, after all. That might be true but this seemed a little different to me. I suggested they do a post mortem on a calf they had been treating for pneumonia. It turned out that the calf had salmonellosis. The lab grew salmonella from several pieces of the calf’s lung. Because salmonella bacteria can spread through the calf’s blood stream, it can make the calf look like it has pneumonia. So salmonella may be a cause of both the scours and the diarrhea and needs to be taken very seriously.

Second, the farm had been pasteurizing the milk they’d been feeding the calves. They thought that pasteurization should have been enough to prevent transmission of the salmonella. When we looked at how they handled feeding, it became pretty apparent that hygiene of the milk delivery system and the milk buckets likely meant that the pasteurized milk was being recontaminated before it was fed to the calves. They were only flushing the milk delivery system with disinfectant. It needed to be scrubbed before being disinfected. Recontamination of pasteurized milk seems to be a common problem.

Third, the farm managers had not really considered that the situation in the calves could also indicate that the farm family and their employees might also be at risk of getting sick. The same salmonella bacteria that were infecting the calves can also likely cause illness in people too. This could be quite serious for children and for people whose resistance is low. As a general rule, you need to be careful with personal hygiene if you are working with or around calves with diarrhea. That is especially true if large numbers of calves are getting diarrhea and if they aren’t getting better with treatment.

We worked out a plan to try to prevent further problems with salmonellosis. I’m going back there in two weeks to see how it’s going and to see if we need to adjust the plan. Reassessment is essential too.