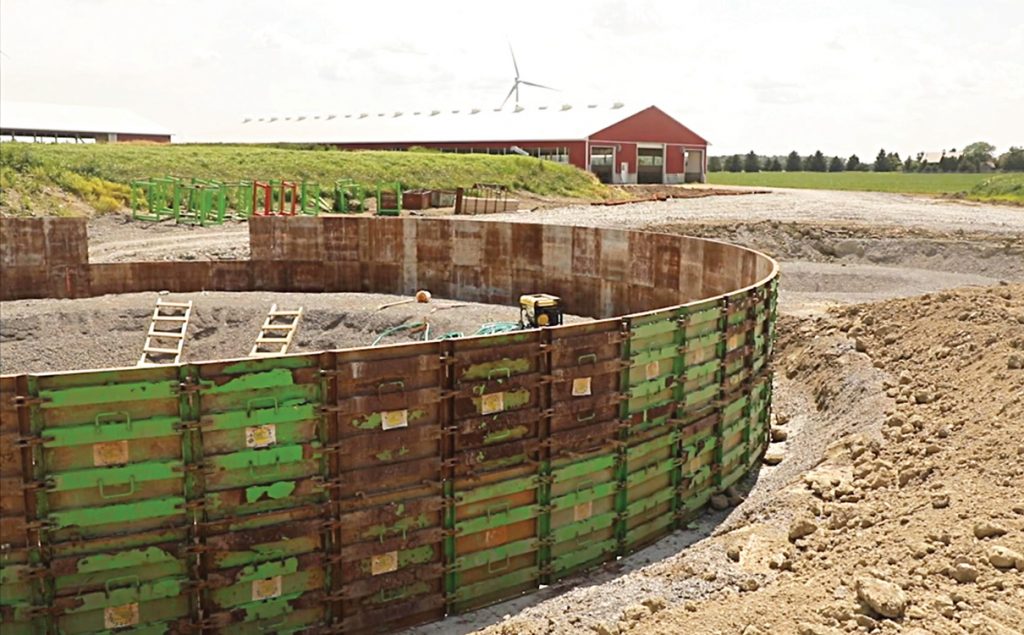 One of the first bio-digesters in the pilot project is currently being built at Nick Thurler’s dairy farm near Brinston.

CANADA — Canada’s dairy farmers are planning to transform much of their cow manure into green energy as a key part of the industry’s pledge to be ‘net zero’ by 2050.

The elaborate plan involves the construction of 310 new on-farm biogas facilities across Canada to process 80% of the nation’s dairy cow manure by 2030, according to a video from project developer GET Corp. screened at the Dairy Farmers of Canada’s annual general meeting in July.

The first of the planned biodigesters is currently under construction at the South Dundas farm of Dairy Farmers of Ontario board member Nick Thurler, president and founder of GET Corp. An initial pilot group of six such facilities will be built in Ontario through a $56.5 million investment partnership with Canadian waste management giant GFL Environmental.

Farms without biodigesters will participate by having their manure trucked to one of the methane-capturing facilities, and then trucked back to the farm as “digestate” after undergoing the anaerobic process. Manure will be picked up “every few days,” according to the video, so add the manure truck to the milk truck making regular visits up the farm laneway.

The collected methane will be sold into the natural gas grid, displacing fossil-fuel natural gas, with profits shared by the involved farmers.

Forming GET “made it a lot easier to talk to the pipeline companies” by combining the output of multiple biogas digesters into one channel, Thurler, also a member of the Dairy Farmers of Ontario board, explains in the video. “By selling a bigger volume, you get better prices, too,” he adds.

The arrangement will also ensure the biodigesters run at the optimum volume at all times. “We’ll have to move manure in from other farms to keep the digesters full, and that makes it available for every (dairy) farmer, not just the ones with a digester, so everyone will benefit,” Thurler says.

Dubbed the Sustainable Agriculture Program (SAP), the effort is supposed to cut 1.5 million metric tonnes of greenhouse gas emissions from the sector, including 500,000 tonnes in Ontario.

“As a dairy farmer, you want to make sure you have a sustainable farm for your kids and grandkids, so you do the best job you can to protect the land,” Thurler says.

The partnering developers’ “grassroots efforts to introduce a viable avenue for dairy farmers to positively impact their sustainability efforts through the conversion of on-farm organic waste to renewable natural gas are critical as we continue to face the impacts of climate change,” the Trudeau appointee says in the video.