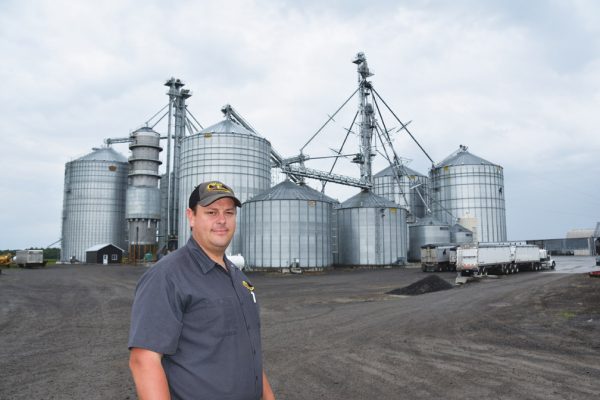 EASTERN ONTARIO — With the 2022 growing season just around the corner, input costs and supply-chain anxieties are soaring to new heights as war in Ukraine picks up where the pandemic left off. While conflict in Europe’s breadbasket has pushed up crop prices to unheard of levels, it has also doubled the price of fuel.

After a whopping investment in a planted crop, the farmer then has to pray, as usual, that the weather pans out to deliver decent quality and yield at harvest, and that commodity prices hold. There’s never a guarantee.

Chesterville-area cash-cropper Andy Corput said he pre-purchased all of his fertilizer and seed last December and, more unusually, locked in his fuel as well. Though he had yet to take possession of those goods, he remained “fairly comfortable” in the coming season at his 1,400-acre farm. He didn’t foresee having to make too many changes, such as cutting back on fuel, fertilizer or chemicals, or adjusting his tillage regimen or cropping strategy.

Noting the surging price of fuel, Andy’s wife, Stacey, said they’ve heard secondhand of diesel surcharges of more than 60% being tacked onto transportation bills. “That would be unprecedented,” she marvelled.

“These are extremely volatile times,” said Kevin Wilson, owner of Wilson Elevators at Vankleek Hill. He’s heard of grain buyers temporarily pausing their purchases with a notice of “no bid” because of marketplace uncertainty.

Wilson said the rising price of fuel and the April 1 carbon tax hike are top of mind for many producers. He suggested even more producers might turn to no-till techniques in a bid to reduce fuel costs.

But cash-cropper Warren Schneckenburger of Morrisburg speculated that growers may end up plowing and cultivating more than usual because of herbicide cost increases and shortages. Glyphosate, when it’s available, has gone up 300 per cent. “I think we’re going to see more tillage — especially if we get a late spring. Fuel is up, but at least it’s readily available.”

Schneckenburger noted that crop risk is at an all-time high, as inputs have never been more costly. “We’re very fortunate to have crop insurance in Ontario, and hopefully we won’t need it. But I’m sure it’s allowed many producers to sleep,” he observed.

“It’s going to be a nightmare,” Green Valley cash-cropper Marty Renaud said of 2022. “Fertilizer is going through the roof.”

Renaud said he was fortunate to be fully stocked — and in possession of — his inputs. But farmers caught short on their herbicides, particularly glyphosate, will have a very trying time this year, he said, expressing worry for the mental health implications. “There will be a few guys that are going to snap.”

Cash-cropper and trucker Brian Haass of Peterborough found the price of fuel perplexing. When crude oil hit $147 per barrel in 2008, diesel wasn’t much more than $1 per litre, he observed. And yet the pump price today is over $2 and the per-barrel price is lower.

Haass said he spread 80% of his farm with fertilizer in the fall and managed to acquire the rest needed for this spring.
He said they’ve been using techniques to stretch their herbicides, such as using a water softener to change the PH of the water used for mixing the chemicals, making them more effective.

The uncertain glyphosate supply might be the “wake-up call” that growers needed, he added. “We’ve been pretty willy-nilly with glyphosate, but I think there’s huge potential for cutting back,” he said, adding there may be opportunities for adjusting residual herbicides and crop rotations as an alternative.

“Anytime something extreme happens, there’s change, and this is going to prompt a lot of change,” he said. The world, Haass observed, is in a scary situation. “It’s a pretty crazy time but we’ve positioned ourselves the best we could coming into 2022.”