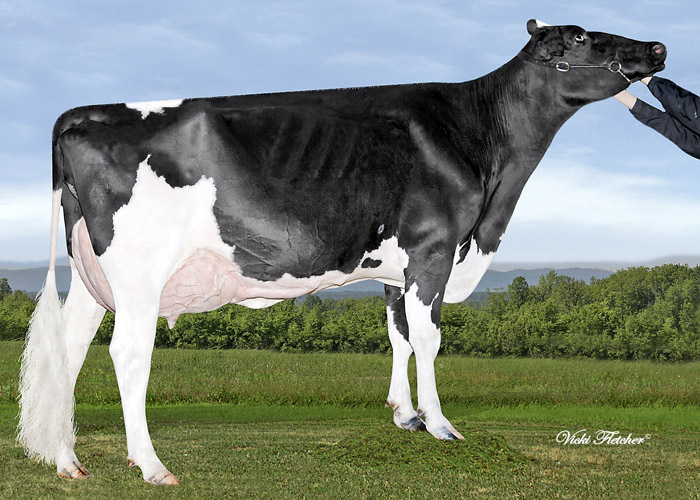 STIRLING — Don Donnan may have winced when he shelled out $18,000 for an 11-month-old calf at the Sale of Stars in 2006 but now that Belfast M Goldwyn Shelly has the 2014 Holstein cow of the year in the bag, the Stirling dairy farmer would pony up the cash again in a heartbeat.

“I’d do it every day. At the sale, it was the going rate, but to us it was a lot. Good thing I’ve got a supportive wife,” jokes Donnan, who runs Donnanview Farms Ltd., about 20 kilometres north of Belleville, with his wife, Bev.

Shortly after Donnan scooped Shelly up at the Royal Agricultural Winter Fair sale, Boyd and Jim Nelson, of Arcadia Farms in Codrington, wanted in, buying a half interest.

Bred by La Ferme Belfast Holstein in Saint-Patrice-de-Beaurivage, Que., and Ferme Maryclerc Inc. in Saint-Claire, Que., it was Shelly’s pedigree — the world-renowned Splendor family — and her conformation that grabbed Donnan’s attention.

“Her cow family is a household name in Holsteins. She was close to faultless. It was an attractive package,” says Donnan.

Visitors to the barn over the years were struck by how pretty she was — in the top 0.5 percentile of the breed, says Donnan, and on a short list of cows scoring VG-87 as a two-year-old. By seven, she was EX-92.

Her embryos were in demand even as a virgin heifer, with interest ramping up when she started her first lactation.

“When she had her first calf, everyone that saw her wanted her embryos,” says Donnan.

Shelly produced 285 viable embryos, exporting more than 100 to Japan, Germany, France, Spain, Australia, and the Netherlands. She was so consistent every six weeks that 96 per cent of her embryos were freezable, to the delight of Donnan’s technician.

“He told us he’s never worked with at a cow like that,” says Donnan.

One of only two Goldwyn daughters with 15 or more brood stars, 35 of Shelly’s first 45 milking daughters scored VG as two year olds, despite being sired by 14 different bulls. Six of her sons are in A.I. units.

She seemed to do it effortlessly, says Donnan. She was always healthy with one of the lowest somatic cell counts in his barn, producing embryos like clockwork and making back his investment more than 25 times over. Shelly has amassed more than $500,000 to date.

Donnan was twice asked what it would take to part with her, but the price tag was too rich for potential buyers. “It’s not every day somebody writes a cheque like that.”

Gearing up for a complete dispersal in August, Donnan is disappointed Shelly won’t be the main attraction. The darling of the barn passed away suddenly a month before solidifying her cow of the year status.

“All good things come to an end. She’d have been the favourite in most barns. Working with her was a dream come true.”