Corn planting in Eastern Ontario is right on time 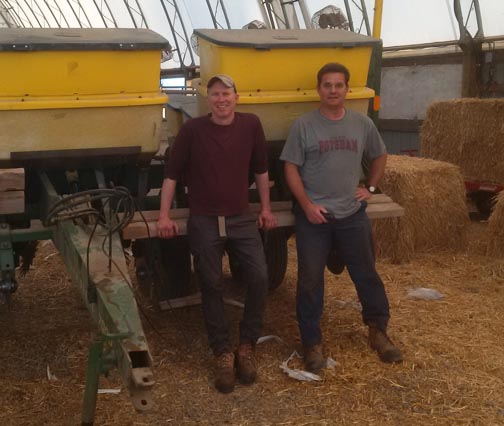 Glenn Smirle and Glen Garlough after a long day in the field.

MOREWOOD — Used to pushing the envelope on planting, Glenn Smirle got his first 20 acres of grain corn in on April 25 and 26 — one of the first in the field in Eastern Ontario — turning a deaf ear to protest that the ground was too cold.

“I wasn’t going to sit around with a thermometer in it, looking at my watch,” said the Morewood dairy farmer, who’s ready if it dries up any time after April 20, and glad for a little help from his father, Bill, and his brother-in-law, Glen Garlough, who runs the cultivator. “Everybody says I’m too early, but as soon as I put the corn in, everybody is at it.”

Farmers were just starting to poke around the last week of April but if the sunny forecast held, Gilles Quesnel expected planting to be full swing by early May. They’re not behind by any stretch, says the Kemptville-based OMAFRA pest management specialist.

Still waiting for the soil to dry out on April 28, Williamsburg crop farmer Steven Byvelds was preaching patience, although his son Andrew was raring to go.

“I have to hold him back sometimes,” joked Byvelds. “We’re never the first ones on and we’re never the last ones off. But once we get going, we can get quite a bit done in a hurry. You give me two weeks of straight good weather, and I’ll have everything in.”

South of Napanee, Hay Bay crop farmer Max Kaiser was on the early side of normal, planting his first 230 acres of corn between April 14 and 19. Every day counts, if he can get corn flowering before it gets dry in July and mature and dry for an early-October harvest. “We’ve seen a lot of years where there is a lot of heat units between April 20 and May 5.”