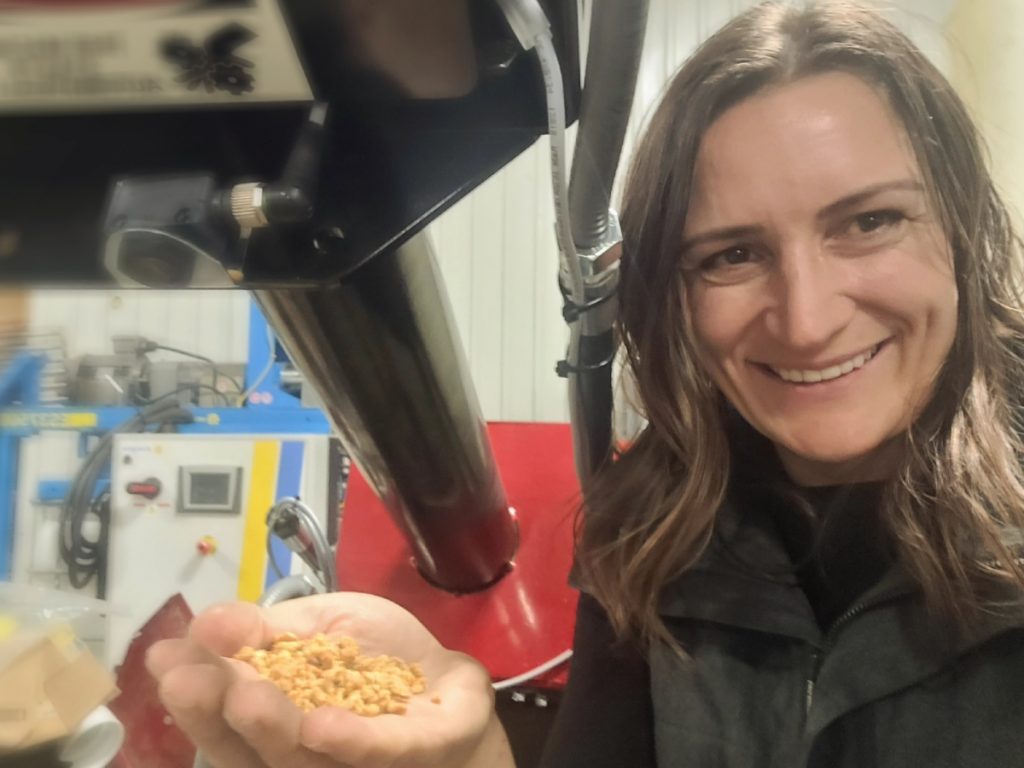 Jasmin Hofer, of Listowel, developed a soybean press that operates on 60 Ontario farms. The press now includes a roaster.

LISTOWEL — Expensive soybeans are driving an appetite for on-farm processing of feed as a cost-saving measure.

That’s according to Energrow founder and owner Jasmin Hofer. Since 2006, the Listowel company she started as a University of Waterloo business student has been locally manufacturing small, automated soybean presses aimed at the individual farm with livestock to feed. The electrically driven units output a highly palatable, crumbly ‘Soyex’ soymeal pellet, between 19 % and 21 % protein, as well as a marketable soybean oil that Energrow buys from participating farmers at market rates (about half of the oil remains in the soymeal).

In addition to that revenue, the soymeal pellets produced would displace about 75 % of the high-protein and fat supplements that the farmer would otherwise have to buy, says Hofer. It all adds up to a quick two-year payback on a $45,000 installed Energrow press, which can supply the needs of up to 300 cattle. 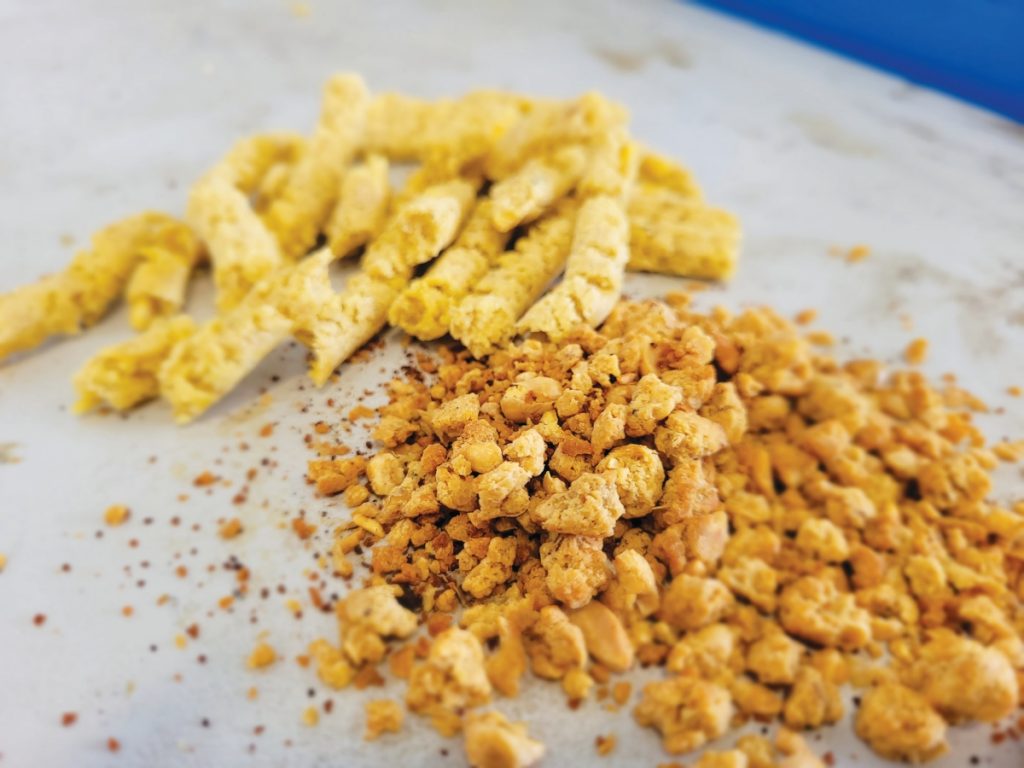 Soybean meal “Soyex” above, at back. The roasted version, at front, is even easier on the bellies of cows and is now edible for hogs and poultry.

Her company has recently taken its technology to the next level by introducing an optional electric roaster at the end of the process. Co-developed with U.S.-based Red Jacket, the roaster can handle the output of two presses. Adding the Red Jacket roaster nearly doubles the cost of an Energrow system. However, hogs and poultry require the heated product, while ruminants benefit from the improved bypass protein performance of the roasted soymeal.

The first roaster was up and running late last year in Newton at Hofarms Ltd., the former dairy farm where Hofer grew up. Today the cash-cropping operation also does some custom soybean crushing.

“Farmers are paying more for inputs, like feed, and something has to give,” she says, noting that feed purchases represent upwards of 40 % of the operating cost at dairy and hog farms. “Dairies are already making most feeds themselves except that final piece of the protein: They’re growing beans, selling them, buying back soybean meal, buying back fat, and now they can have made-on-farm fresh, super palatable soymeal for their cows. They feed it into the TMR, into the robots. Guys are looking to feed more of their own crops.

“We are getting a lot of demand as feed prices have been a killer for cash flow on livestock farms the last few months.”

Users are still further ahead even if they buy the raw soybeans to make their own feed, she says. And even with Ontario’s hydro rates, electricity still only accounts for between $5 and $6.50 per tonne in operating costs. “More and more nutritionists are coming onboard because more and more farmers are telling them, ‘Look we need to cut costs.’” 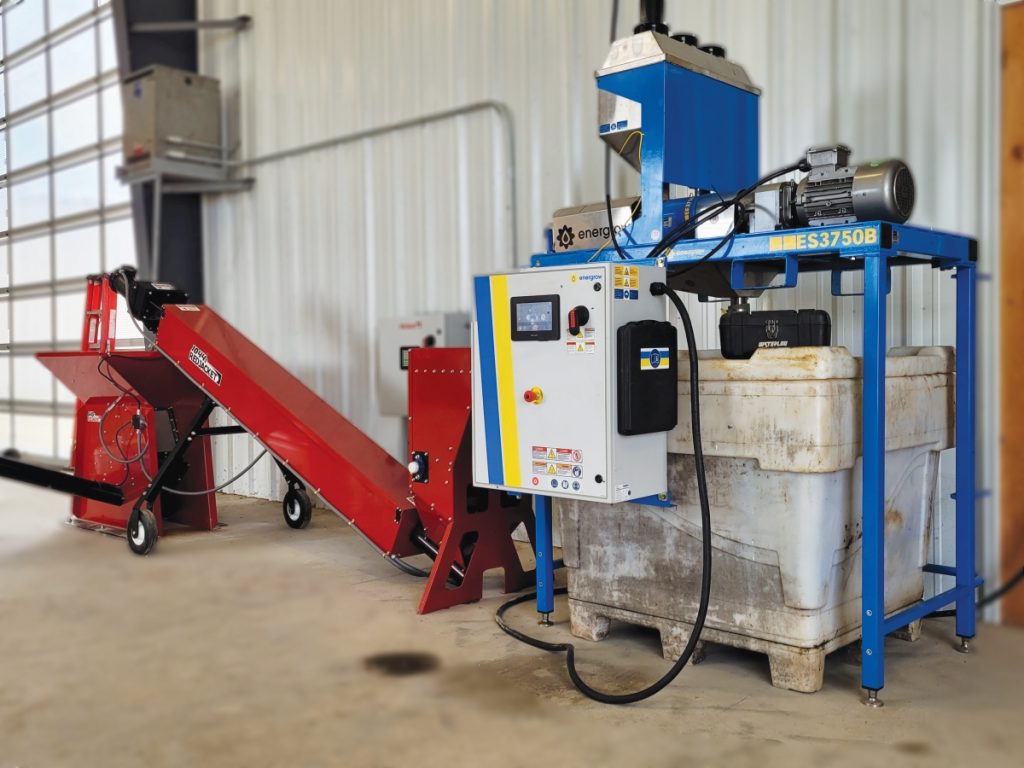 Soybean press with added roaster has a cost of about $90,000 installed.

And the animals love the final product. “We call it cookies for cows,” she says.

But what about those Chinese crushers and presses that are out there? Hofer points out that Energrow is the only Canadian oilseed press manufacturer, and her company has spent the time to develop an actual turnkey system that works and is backed by “the best warranty.”

She doesn’t consider the offshore makers as competitors. “We consider our systems for guys that are busy. They are not necessarily looking for more equipment, but they are looking to increase efficiencies and they don’t have time to play and tinker. With those other units, you’re going to have that challenge, and you’ll have to buy two, because by the time you get parts, you’re out of feed. And then you’ll have to change it up (your ration) and for dairy, that’s a no-no.

“We’re very specialized with what we’re offering and it’s kind of a niche market. We’re the only company that really offers a fully automated oil press.”

As for the extra oil produced, Energrow will buy it and truck it away, Hofer says, but declines to reveal numbers. The company does some processing of the received oil at a warehouse and sells it for feed and industrial purposes. One tonne of soybeans yield about 80 litres of extracted oil when sent through an Energrow press.