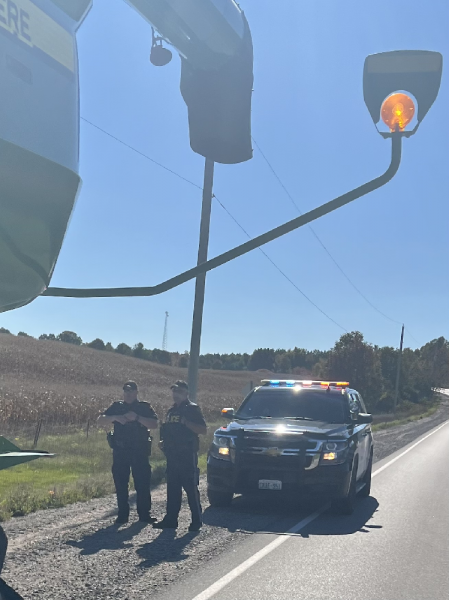 Cash crop farmer Mike Sternberg took this photo from his combine after he was stopped by police.

ORILLIA — Cash-cropper Mike Sternberg says he had to call 9-1-1 on a “rogue” police officer who pulled over his combine and demanded to see the “licence” to operate it.

Except there’s no licence of any kind required for a combine. The Highway Traffic Act exempts farm tractor and combine operators from licensing. The law only requires the driver to be at least 16 years old. By law, however, a driver operating a vehicle must show identification when stopped by police.

Sternberg, 60, says his Sept. 30 emergency call prompted an OPP sergeant to show up at the scene and talk with the other officer. The two men in uniform spoke for 10 or 15 minutes. The farmer says he waited in his cab and was finally allowed to go, without charge, about an hour after being pulled over on Old Berry Road, west of Orillia.

The confrontation unfolded after Sternberg was pulled over around 3:45 p.m. while driving his newly acquired John Deere unit home from a dealership. He was running the machine without its harvester head attachment and had about half an hour left in the three-hour drive, he says, when he was stopped. He added that the combine had a slow-moving vehicle sign and had flashing lights.

The driver is not obligated to pull off the road to allow vehicles to pass, he said. In fact, pulling off the road for traffic is considered dangerous because the shoulder might be weak and pulling back onto the road could also be dangerous, he said.

Nokes recommends that farmers offer identification but they are not obligated to carry a driver’s licence while in a tractor or combine. He added that if a farmer is stopped and has no identification, he recommends telling the officer that one is not required to have a licence to drive a tractor.

Sternberg said he got out of the combine to speak with the officer, and was told he was going to be ticketed for obstructing traffic and was asked for his licence. Sternberg insists that he did pull off the road several minutes before he was stopped and refused to show any identification.

Sternberg recalls with a tone of incredulity. “I said, you don’t need a licence, buddy, to drive a combine…. I got back in the combine and called 9-1-1.”